The boxset of INDISCRETION by Elisabeth Grace, containing all four complete volumes, is available now in print and e-book form! 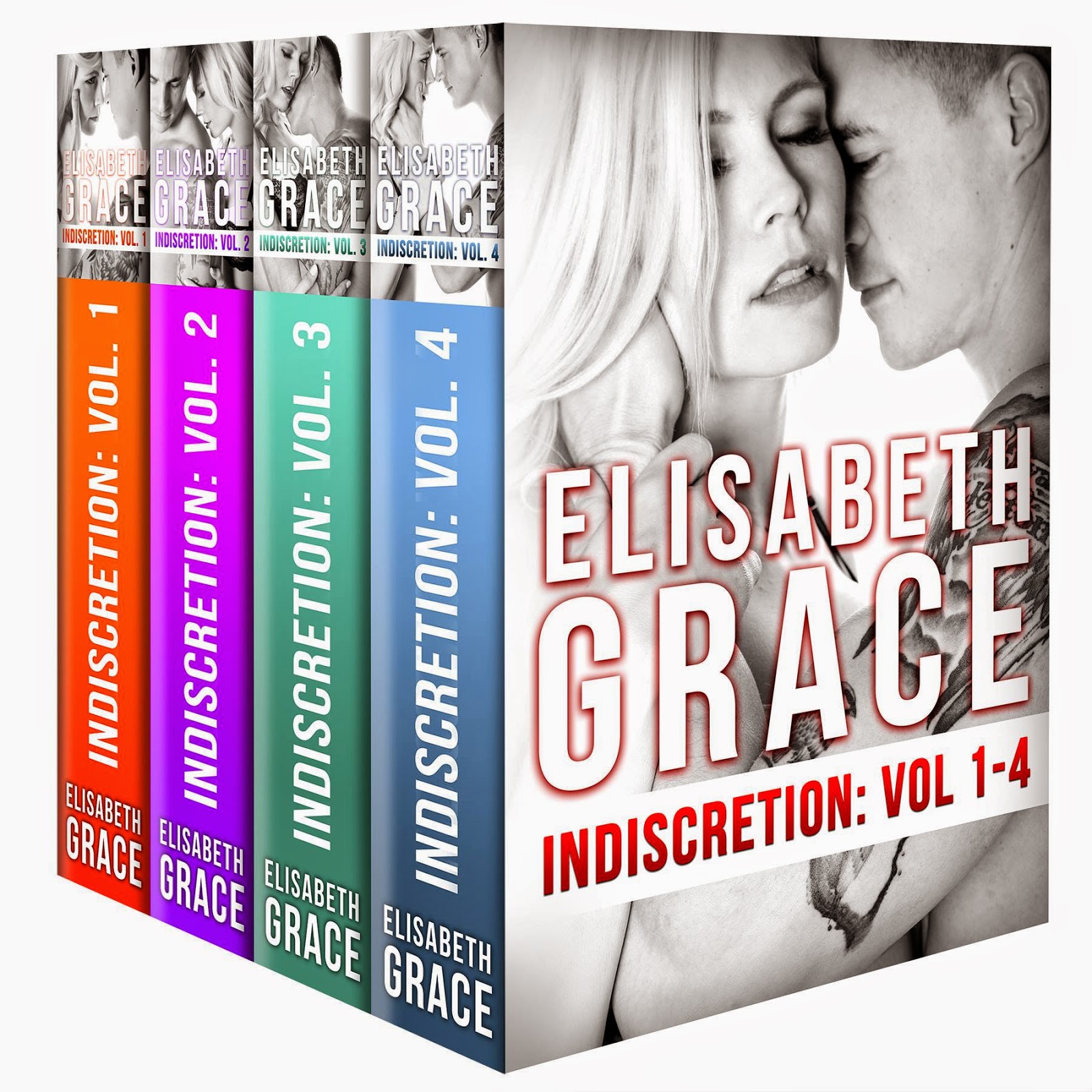 *****THIS BOX SET CONTAINS THE INDISCRETION SERIAL SERIES IN IT'S ENTIRETY*****

F*ck and chuck. Pump and dump. Hit it and quit it. One night stand. Didn’t matter how I branded it — that's all she had wanted it to be. That much was clear when she left me with my pants down and my dick still out.

What she hadn't counted on was fate intervening and our worlds colliding — again.

The day I showed back up in the life of Chloe Griffins, I knew I had to have her again. My body was hungry for another taste. Like an addict, I'd been craving another hit for months, and there she was — flesh and bone, tits and ass.

The fact that she worked for the competition should've been reason enough for me to leave her alone. I had a job to do that summer and f*cking Chloe wasn't part of it. But I was like a man possessed.

I'd do whatever it took to have her again.

"You do not need to bring that up." Her eyes narrowed and I could tell she was pissed.

"Really?" I raised an eyebrow. "Do you react this way to every man who gives you an orgasm? Or just the ones you choose to hit and run?"

Good. I had her off-kilter. At least now I knew the feeling was mutual. "Look, it's fine." I shrugged and grinned, showing her I wasn't all that bad. "Why did you take off that night?"

She looked at me, contemplating her answer. "I was embarrassed. I've never done anything like that before. I had a little too much to drink and let's just say I wasn't thinking clearly."

I took a step closer, my gaze locking on hers. My hand moved to her face and cupped her jaw. I couldn't resist. "Oh, I'd say you were clear enough with me about what you wanted." I grinned and inched closer to her. The heat between us was palpable. I enjoyed making her uncomfortable. Maybe it was payback for her having left me in the dust that night.

Who am I kidding? It was the attraction that still pulsed between us, even months later, in the light of day and stone-cold sober.

Her mouth dropped open. "Please, you were the one who kissed me first!"

"True, but you were the one who straddled me like you were gearing up to ride bronco," I said with a pretend laisse-faire tone.

Ah, there was that adorable flush in her cheeks again, when it had just started to subside.

I have a soft spot for romance novels with happily ever afters and a hot spot for alpha males! I currently live outside Toronto, Canada with my hubby and two small children. Life is busy, but never to busy for a good story and to share my love of reading and writing with others.

For more of the lowdown on me feel free to visit my author website.

If you're US based and you want to receive a text message when Elisabeth has a new book go LIVE, text ROMANCE to 313131!