We are so thrilled to bring you the Release Day Launch for Shiloh Walker's FURIOUS FIRE! 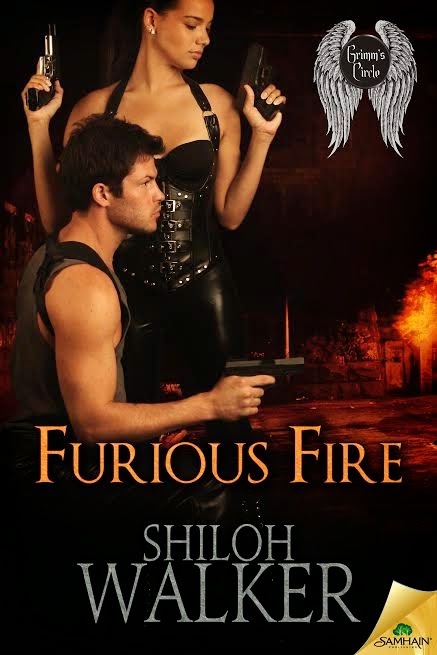 He is the love of all her lives...

Thomas Finn, troublemaker, gunslinger, guardian angel... loner. More than a hundred and fifty years ago, he was shot in the back then brought back to life just in time to watch a demon masquerading as his best friend kill the love of his life.

Now, as a Grimm, he satisfies his need for vengeance hunting down demons like the ones that took Rebecca from him. His mission: kill as many as he can, then, when the time comes, go down in a blaze of glory. But with each kill, he comes closer to a line no angel should cross.

Her name was Rebecca. Then it was Tilly. Then Ada. Now, Kallypso. She's lived so many lives, she can't even remember when or why it started. All she knows is, she's always searching for a man with golden eyes that make her burn. And when she finds him — as she always does — she knows that spark of joy means she's only seconds away from death... again.

This time will be no different... unless something breaks the cycle once and for all.

Warning: Contains the Groundhog Day of star-crossed lovers, a pissed-off guardian angel, a demon-hunter with an axe to grind, and the battle to end all battles. Be warned... there's pain ahead in this book. Oh, and that HEA finally happens. For these two, anyway.

This will be the second to the last in the Grimm series... make sure you read it... want to see how it all comes down...

Grab the previous books in the series!!! 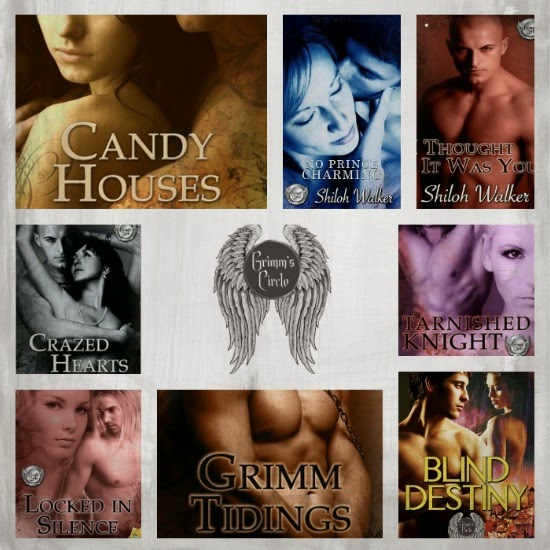 I Thought It Was You
Grimm's Circle #2.5

As for this life, it’s possible that back when I was still a little kid, I might have been too innocent to understand just what a demon was. Back then, I’d only believed in monsters. In evil.

Children can sense evil. If you watch them, you can see it. They know who to pull away from, who to trust... who to not trust.

Of course, not all children are able to do that. Evil can be so very clever. It knows how to hide. But sometimes a child can see things more clearly than we do. I think even when I was very young, I looked out at the world and saw the same things I see now...

That was the reason I wanted my mother to check under my bed, the reason I needed the lights burning even when I was past the age when my friends were no longer afraid of the dark.

They weren’t truly monsters, something I found out all too soon. Demons, in human skin, and that makes them so much more deadly.

If they looked like the demons we saw on TV or in books, it would be easier to stay away from them.

Maybe then, I wouldn’t have seen what I’d seen.

I was ten when it happened.

Lying in bed, hugging a pillow to my chest.

My mother had slipped out into the backyard and I knew something was wrong.

The neighbor... there was something not right with him.

My grandma had teased her about been moonstruck, but it was something far worse. Practically obsessed, she’d slid out into the backyard to flirt with him. She couldn’t see him the way I did.

That was a crucial piece of information. I’d finally figured that much out. It had saved me a lot of grief, something I hoped I’d remember when I died this time.

It would have saved me a lot of trouble if I’d known it last time around.

Bits and pieces of those other lives filtered through my mind at odd occurrences, but none of those memories — or the lives — had been particularly happy. There were vague memories of a man. Wavy reddish-brown hair that tumbled into his face, eyes that glowed like molten copper, a quicksilver grin and a temper to match.

His name was Thom and every moment of happiness in any of those lives was because of him.

And the moment I met him, I had to get ready. Because I’d be dead within weeks. Sometimes minutes, sometimes days. I’d never know.

But it always happened. I’d figured that out in my last life and I’d carried the knowledge through into this one.

So far, I’d managed to live longer than my average—I was twenty-six, practically a senior citizen.

If I could avoid him, I might even see thirty.

But if I avoided him, I’d never see happiness.

Talk about your trade-offs.

Shiloh Walker is an award-winning writer…yes, really! She’s also a mom, a wife, a reader and she pretends to be an amateur photographer. She published her first book in 2003. Her newest series, Secrets and Shadows, launched in April 2014. Look for the newest book Deeper than Need, to be followed by Sweeter than Sin and Darker than Desire.

She writes romantic suspense, contemporary and paranormal romance, and urban fantasy under the name J.C. Daniels.