Nurturing that Spark
by Sandra Sookoo

All Morgan Davidson wants is a chance to reconnect with her fifteen-year-old niece – sans digital dependency. She books a cabin for Christmas week in rural southern Indiana, but contracting a case of the warm fuzzies for a handsome ranger isn't part of the plan.

Carter Poole, single dad and park ranger, has simple tastes. He’s not on Facebook, doesn’t let his five-year-old son play video games and spends a lot of time outdoors. When he’s sent out to investigate mysterious tracks, he meets Morgan and a spark ignites between them. He invites her to share the holiday with him and his son.

Between teenage angst, emotional drama and second-guessing, Morgan and Carter manage to steal a few moments alone. When his son goes missing on Christmas Eve, the world narrows and they realize what matters most - family. The more mismatched the better.

"You and I are going away for Christmas break. If your dad can do it, so can we." Morgan stood. Slowly, she entered the living room if only to better gauge the girl's reaction.

"You're taking us to Florida?" Mid-level excitement infused the inquiry. She put her plate on the table as she pinned her gaze to Morgan.

Guilt assuaged her. She'd not seen Harper so animated in a while. "Um, not exactly." She cleared her throat, and when her knees wobbled too much, she perched on the edge of the recliner. "I've rented us a cabin in Brown County."

One of Harper's red eyebrows rose. "Why?"

"We're getting away from it all."

"So do I, but I think it's making things worse." She took a deep breath then let it ease outward. "I'm tired of you and I always being attached to electronic devices or our computers. I'm tired of eating at a coffee table. I'm tired of talking only during commercials if we even talk at all." She held her niece's gaze. "We are going to have a good, old-fashioned family Christmas no matter what."

The teen jumped to her feet. "You can't do this to me!" She shook her head so violently her hair swung. "What about my friends?"

Morgan shrugged. "What about them? I'm sure they'll have their own holiday stuff to deal with, and they'll have to do all of it without you."

"Whatever." Harper grabbed her phone. "At least I can still text them."

"Yeah, here's the thing." She cleared her throat. When had she suddenly developed a problem swallowing? "You can bring your phone, but it won't work. There won't be wifi. I'm not even sure the 4G or roaming or whatever it is will work down there. It's all part of connecting with each other and not the online world. Remember?"

"You are so not right." Harper stormed out of the room, down the hall and into the guest bedroom. The door slammed after her.

"Maybe so, but this has to be better than what we've got." The last was said on a whisper. Teenage angst didn't matter. Interrupting the status quo would do them good, wouldn't it? She slumped into the chair. She only hoped she'd be able to break her own addiction to gadgets. Or take out. Oh, dear Lord, what would they do if there weren't restaurants nearby? They'd have hot water, surely. She groaned and hoped.

Seventy-two hours until the end of the world.

Offered representation in February 2014 by Scott Eagan at Greyhaus Literary Agency for Victorian-era historical romances, Sandra’s been hard at work researching, planning and writing a new series. When not immersed in creating new worlds and engaging characters, Sandra likes to read, bake, taste new teas, watch The Big Bang Theory and Psych as well as Finding Bigfoot, and travel. Her favorite place to spend vacation hours is Walt Disney World: it’s where dreams come true and the soul can play. When she’s not writing or inventing new recipes, she spends time with her husband—goofing off and making moments count. Life’s too short to be serious all the time.

Sandra loves to hear from her readers. You can write to her at sandrasookoo@yahoo.com, visit her website at www.sandrasookoo.com, or look her up on Facebook and Twitter. 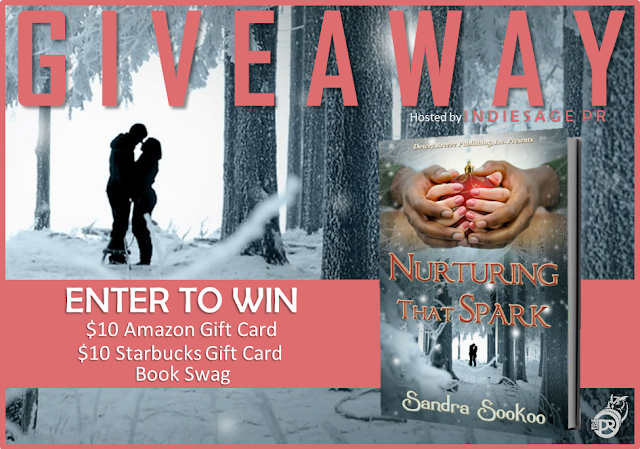