That Night With You
by Alexandrea Weis 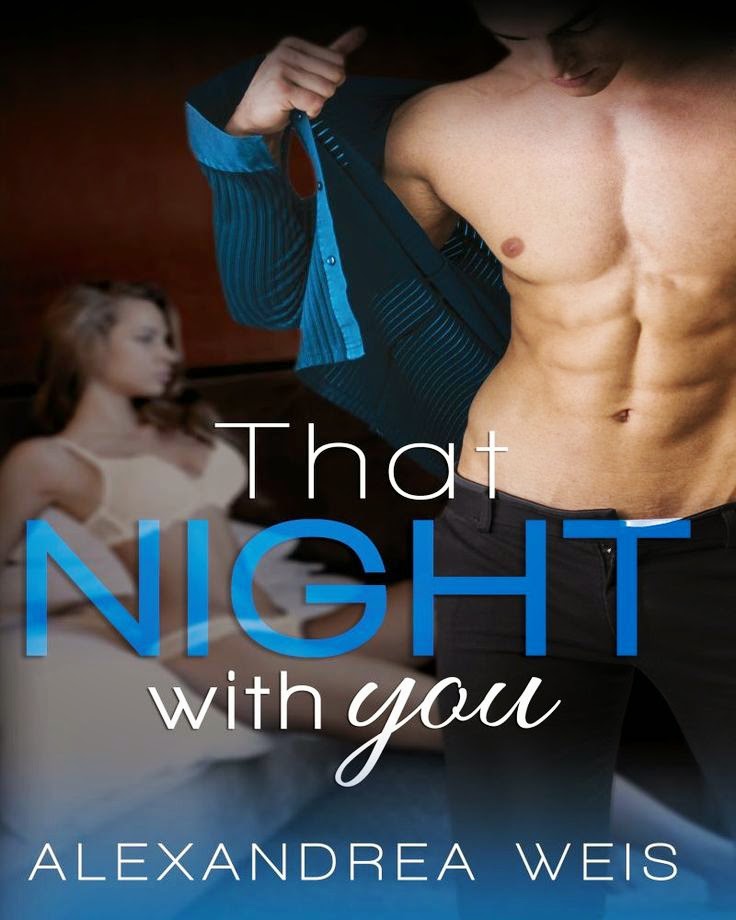 Madison Barnett spent one night with a stranger that changed her life forever.

But when she takes a job at Parr and Associates as their newest architect, Madison has no idea that the stranger she has spent five years trying to forget is about to walk right back into her life. And what she hoped would be a fresh start turns into a perplexing dilemma.

Soon Madison’s life is sent into a tailspin as she tries to juggle the demands of her controlling boss, Hayden Parr, with her persistent desires for her long lost sexy stranger.

Then, just when she thinks all hope is lost, everything changes.

Madison embarks on an education in the art of pleasure that began five years ago in the bed of the man who captured her heart. But there is one little catch...

When fantasies become reality, passion can turn addictive in... That Night with You. 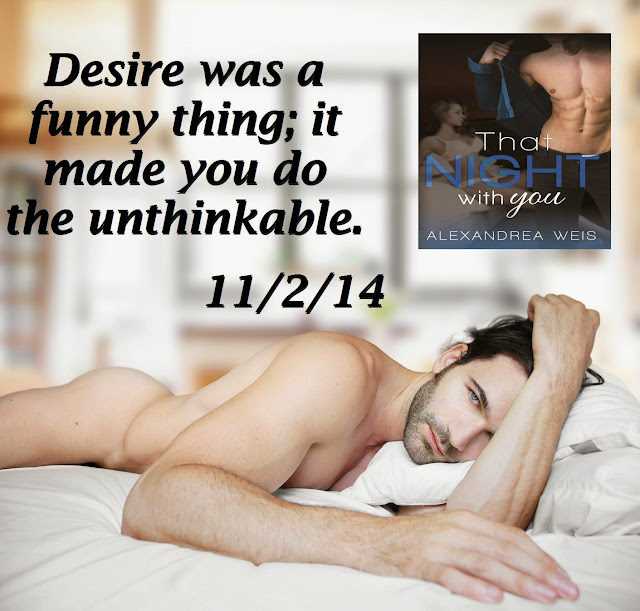 At the entrance to the patio, she savored the feel of the nippy fall breeze on her hot skin. Then, a familiar laugh made her breath catch in her throat.

Standing by an outdoor fireplace of orange stucco and dressed in a fitted black tuxedo was Hayden Parr. In the pale light of the dozens of cast iron lanterns that were strewn about, his gray eyes appeared magically aglow. His rugged features were accentuated by the dancing shadows of light, making his strongly carved chin and sharp cheekbones even more luscious. In his hand was an old-fashioned glass of dark yellow liquid that matched the dark yellow furniture spread about the patio. He was talking to a beautiful brunette with stunning cheekbones, catlike brown eyes, and a lean figure, not unlike his. Draped in a black and white satin gown that gathered at the waist and collected on her right shoulder, she looked every inch the woman Madison knew she could never be: sophisticated, stunning, and irresistible to men. As she chatted with Hayden, she affectionately placed her smooth white hand on the sleeve of his black tuxedo jacket.

The well of jealousy that overtook Madison was unexpected; she wanted to scratch the woman’s eyes out. Feeling the desire drain from her body, Madison was about to turn away when Hayden’s eyes found her. Suddenly, she felt naked beneath his gaze. He seemed to drink in every inch of her, and without hesitation she knew what he was thinking. Any woman worth her weight knew that look when she saw it in a man. It was primal; it was instinctual, and utterly carnal.

Putting his drink down on a nearby table, Hayden abandoned the woman at his side and came up to Madison. “You look absolutely wonderful,” he purred in a voice akin to black velvet.

The rush of heat to her cheeks only compounded the tingling in her belly. “Thank you, Mr. Parr.”

He grinned, looking sexy as hell. “None of that Mr. Parr stuff tonight. We’re out of the office and this is a party. Call me Hayden.” 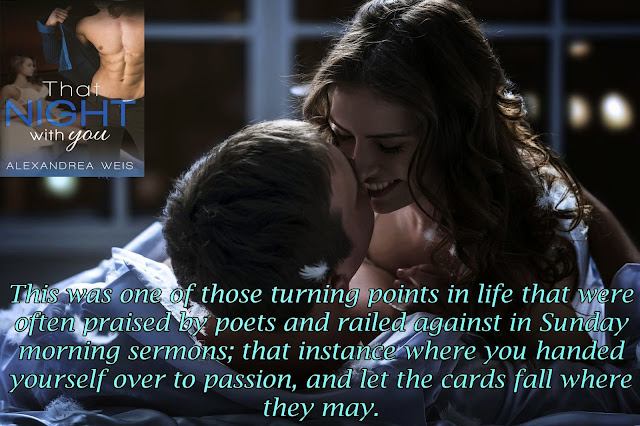 From New Orleans, Alexandrea Weis was raised in the motion picture industry and began writing stories at the age of eight. In college she studied nursing and went on to teach at a local university. After several years in the medical field, she decided to pick up the pen once again and began her first novel, To My Senses. Since that time she has published many novels. Infusing the rich tapestry of her hometown into her award-winning books, she believes that creating vivid characters makes a story memorable. Her work has been critically acclaimed and has been continually growing in popularity.

Alexandrea Weis is also a certified/permitted wildlife rehabber with the La. Wildlife and Fisheries. When she is not writing, she rescues orphaned and injured wildlife. She is married; they live in New Orleans.

*Release Day Blitz* Fallen Down Under (Down Under #2) by S.M. Phillips + Teasers @s_m_phillips_

Fallen Down Under
(Down Under #2)
by S.M. Phillips 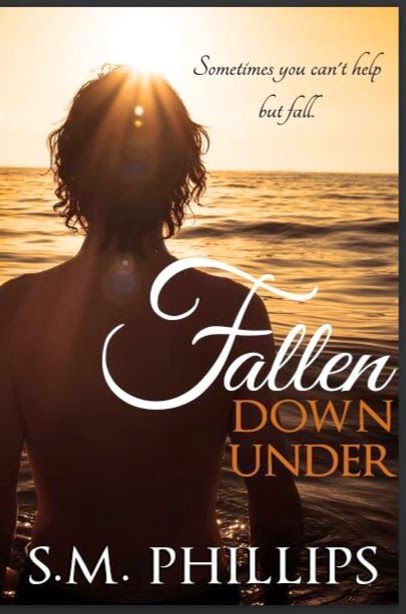 "Fuck." I slam my fist into the desk before me and feel nothing but rage. I need to go after her. I need to explain. "But isn't this what you wanted?" The voice inside my head whispers. "Isn't this a nice easy way out?"

Everything Max has done has always been at a cost to others around him. He wasn't about to make that mistake again. No longer will his selfish ways punish those close to him. Sometimes it's better to have had and lost than to never have had at all.

Finally after what felt like forever, Jess was getting a glimpse of control over her life again and allowed her defences to come crashing down, only to have what it guarded to be crushed once again. Now, on the other side of the world away from her friends, she doesn't know what to do.

Should she stay or should she go?

Is it too late or have they both fallen too far into something that is completely out of their depths? 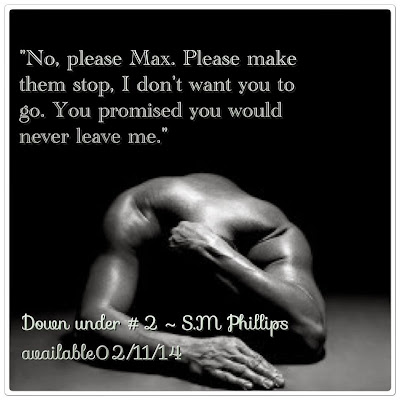 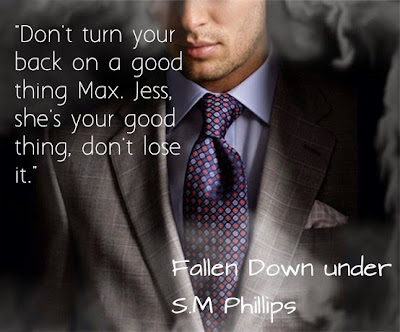 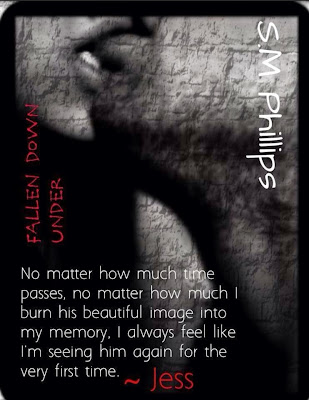 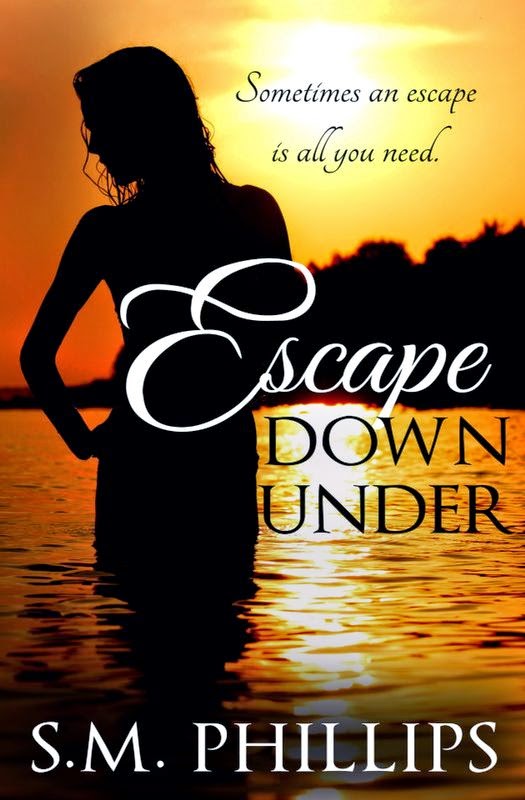 Welcome to the crazy and hectic life that is me... A fun, loving mum of one special little boy, girlfriend (I'm sure it should be wife by now!!) and an overall crazy, happy go lucky girl from England.

I have always had a passion for reading and writing. Wherever I am, my book reader is never far behind along with a mug of coffee.

I found myself wanting to write from a young age, I have quite a few hidden stories on my computer somewhere, maybe I will have to dig them out and play around with them at some point.

S.M. Phillip’s debut Novel Escape Down Under was released in July 2014 with the second instalment Fallen Down Under due for release on November 2nd 2014. 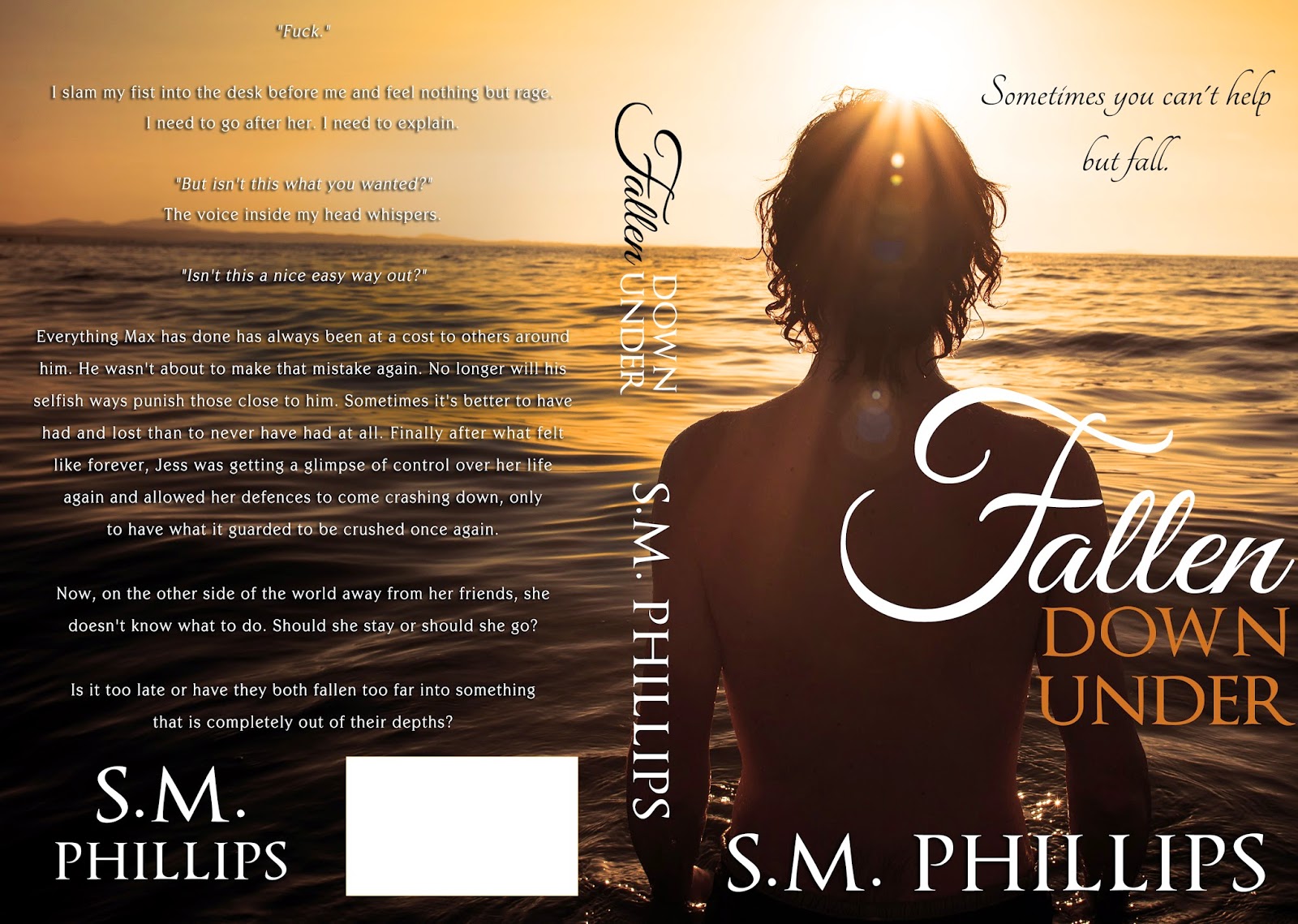 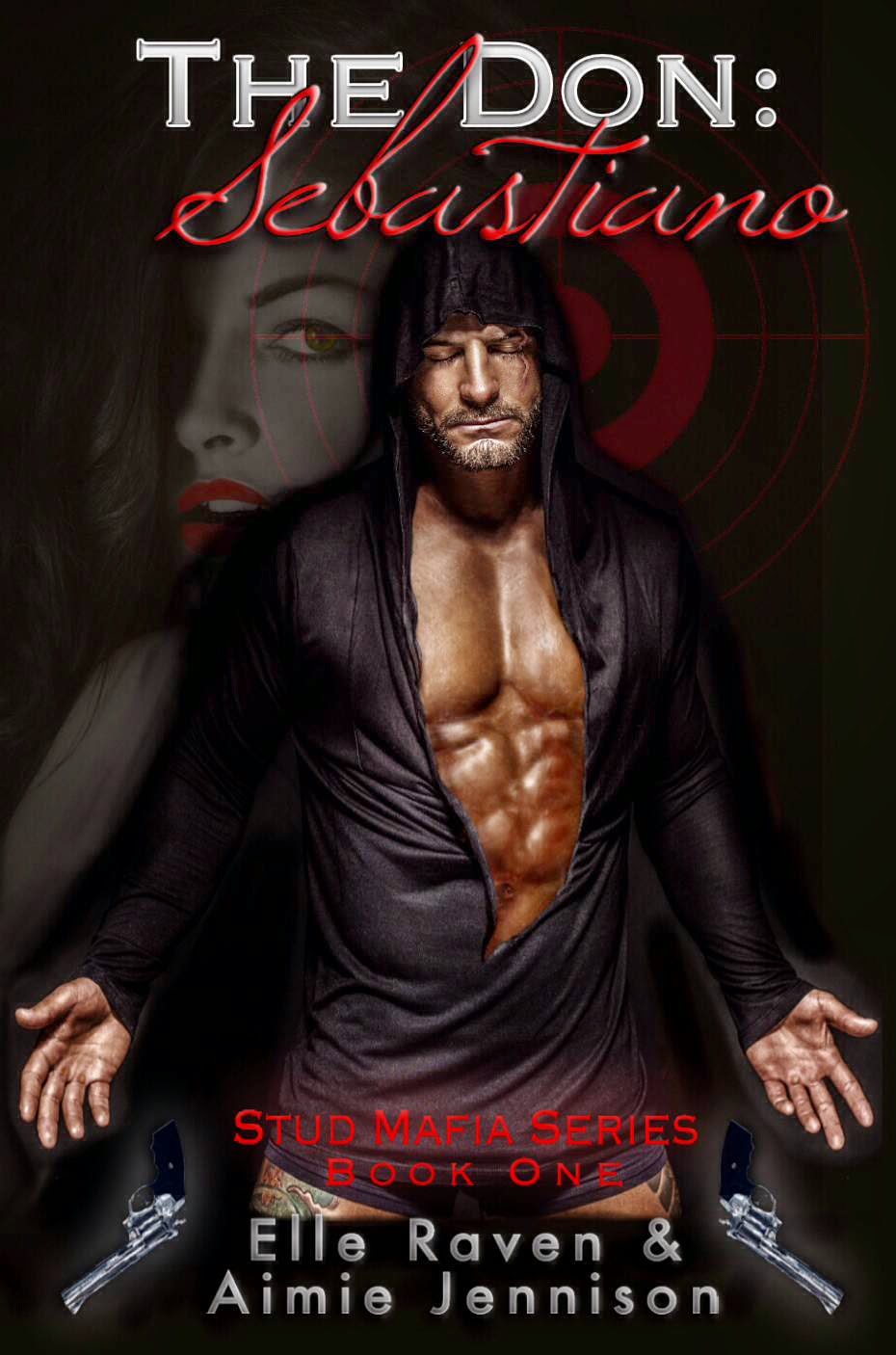 Sierra Winters never planned on falling for the most powerful man in Sydney.

One minute, she's an everyday twenty-eight year old working class office girl the next, she is being blackmailed by Sebastiano Morassi, Sydney's influential crime family boss, to settle her brother's debts.

Sierra knows she should never have gone to him to "save" her brother but she is captivated by him. His monstrous size, his malicious evil glare and more frightening is the scar that marks his left cheek. Never has she never met or seen anyone like him. The more time she spends with this frightening yet captivating man, the harder it becomes to want to escape.

Sebastiano Morassi is pure danger. So why does she crave him? He can make her tremble with fear and make her hairs stand on end but he also has a sweetness to him that tugs at her heart. Sierra soon finds herself merged into his world full of murder, revenge, and deceit.

"Sebastiano, you know no one but you has ever done that to me before," I reassured him.

"That's not what I asked. I don't care about some boy who may have fumbled between your legs a time or two. I want to know if a man has done it to you."

"No. I've told you this so many times before, only you have done that to me." I knew he was playing one of his games to get me even more worked up, and he knew exactly how to play me.

"Done what? You telling me you've never had another guy put his mouth on your pussy and give you an orgasm before, Sierra?"

"Where? Tell me, sweetness."

Removing his hands from between my legs, he cupped my chin with his hand, tilting my face to his so I had no choice but to look him in the eyes. His thumb swept along my bottom lip, and I let out a shuddering breath as he leaned closer, tilting his head as if he was going to kiss me but pausing instead. His gaze burned through me, seeping down into my soul, seizing me like a prisoner.

I am his willing captive.

And I love it.

Elle Raven is a new and upcoming Aussie author who lives in Adelaide, South Australia with her husband and three young children. Elle can usually be found with her iPad or laptop computer permanently glued to her. She began writing from a very young age. In fact Elle used to write plays and musicals when she was in high school. Having such a flamboyant personality she even performed in them herself Always an 'actress' and always the star.

Elle loves reading and writing about an alpha-male hero. If she can't read about one that is alpha enough to suit her she will take it upon herself to write one.

Elle's books will feature an alpha-male hero who will come tumbling to his knees in lust and love when he finally meets the heroine of his dreams. Rest assured that in an Elle Raven book, the hero will never cheat.

Elle would love to hear from you. Please email her or visit her Facebook page. She loves connecting with people and having a chat with the readers about her books or any other books you may have in common.

Aimie is a Yorkshire lass living in Western Australia, with her three boisterous boys and her husband. Aimie loves to people watch; it’s her favourite way to come up with new characters and stories. So next time a stranger is staring at you in the street, don’t panic, it could be an author basing a character on you.

Aimie has always loved to read and write. Her favourite place to listen to her characters is at the beach.

Aimie would love to hear from you. She would be happy to receive an email or post on her Facebook page; she loves chatting with likeminded bookworms. 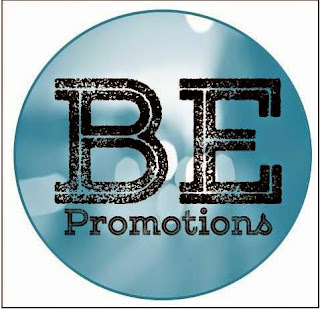