Emily Reynolds, estranged sister to Dane Reynolds, President of the Savage Angels MC, has just lost her father. He was not a caring man and inflicted suffering on his family. Dane abandoned her and her mother years ago, leaving them alone to deal with a brutal man who never showed any love or mercy. Emily wants Dane to feel the pain she felt, she wants him to suffer as she did and decides to make the long drive to see him.

Salvatore Agostino, captain in the Abruzzi crime family is also on his way to see Dane Reynolds. A ruthless businessman, he is fiercely loyal to his family and his men. A chance encounter brings him face to face with Emily.

These two meet and their attraction grows into a love that neither could have anticipated.

Will they be able to overcome the turmoil that awaits them or will their love be destroyed by forces beyond their control? 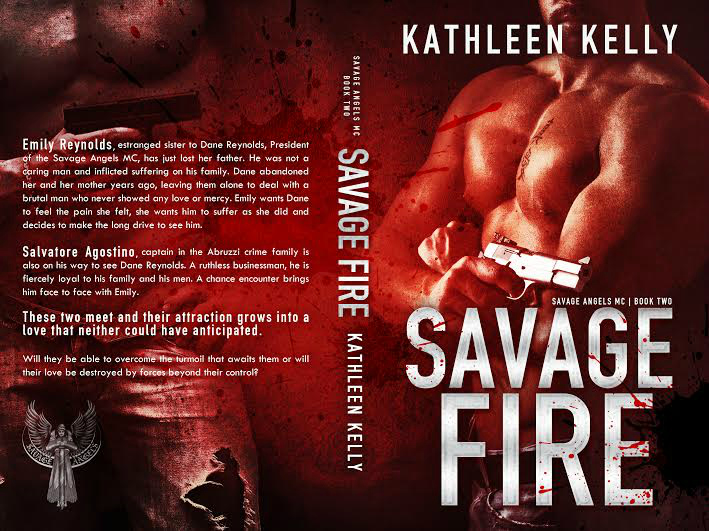 The MC world meets the Mob world in this awesome book by Kathleen Kelly!

Emily Reynolds and Salvatore Agostino meet when he saves her twice. They are both traveling to meet Dane Reynolds, but neither of them know that. Their connection is immediate. When someone uses Emily as a bargain chip, Dane and Salvatore must work together to save her.

Loved Savage Fire! It is an amazing book with an awesome story. It hooked me from the very first page and I couldn't put my Kindle down. It has lots of action, drama, sweet scenes and steamy scenes. It answered a lot of questions left unanswered in Savage Stalker (we finally find out what Kat's mom really did for a living!).
The book is mainly from Emily's and Sal's POV, but, like the first book in the series, it has a few chapters from other characters's POV.

Savage Fire character's are great!
Emily was raised by an abusive and alcoholic father and a mother that chose her drunk and violent husband over the safety of her children. Despite that, Emily grew up a strong woman, knowing what she wants, although she can be a little naive. She doesn't understand how Dane was capable of leaving the family and after their father dies she decides to confront Dane and try to hurt him.
Salvatore is a captain of the Abruzzi family. Like Emily, he has a rough childhood, but he took matters in his own hands and escaped. He doesn't see himself as a man good enough for Emily because of the things he has done for the Abruzzi family. He is very loyal to his man and with Emily he is very sweet, gentle, and kind, but also very protective and possessive.
I loved to see all the characters we met in Savage Stalker! Dane is still very swoon worthy and Kat is a ball of energy that made me laugh.

Once again, Kathleen Kelly wrote an amazing book, flawlessly written, with an awesome story and great characters. Can't wait to read the rest of the Savage Angels MC series and more about Jonas and Truth! I am completely overwhelmed. My core is on fire and I want so much to kiss him, to touch him. I feel sparks of electricity shoot through every fiber in my body and every nerve ending is screaming for release. I want his hands on me, all over me.

I put my hands on his chest and push him away. He's too close, making it hard to form a single thought. I take two steps to the side to put some distance between us so I can speak like a human, not a lust induced zombie. "Yes, they towed my car and it's in their lot. I haven't really spoken to them about it yet. I kind of fell asleep on them..."

His face clouds over and he says, "You kind of fell asleep on them? What. Does. That. Mean?" He pauses between each word and growls them at me.

"Jonas took me to see Doc Jordan and he gave me something for the pain, but because I hadn't slept in days it made me sleepy. I think he ended up carrying me to their clubhouse." I realize how all this must sound. If someone told me that exact same story, I would be thinking the worst.

"Did they touch you, Amare?" he growls at me, his eyes blazing with anger.

"No, no, no! In fact, Jonas put a guard on my door so no one would go near me. Not that they would. I was safe, Sal." Something crosses his face and he stares at me so intently that I look away and stare at the floor.

He moves back into my space and lifts my head up. "Thank you for getting me coffee. Let's go have breakfast and I'm buying. I think I shall keep you in my sights to make sure nothing else happens to you. I have never met a woman who allows herself to get into so many dangerous situations, in such a short space in time. You, my Amare, are a handful." He moves away from me and does up his shirt, then grabs his jacket. He opens the door to his room and extends his arm. "Shall we?" he asks, offering me a smile that reveals his dimple. My core clenches again and I have to fight the urge to throw myself at him. Katarina Saunders. Kat to the world, international rock star. Lead singer for The Grinders. Until an accident that ruins her career and sends her running into the mountains, away from everything and everyone.

He's had his eye on Kat for a while now and has been waiting for her to come to him, but he's had enough of waiting. He's decided it's time to make her his. But so has her stalker, he's been waiting for far too long...

Can Dane save Kat? Or will her savage stalker get to her first? 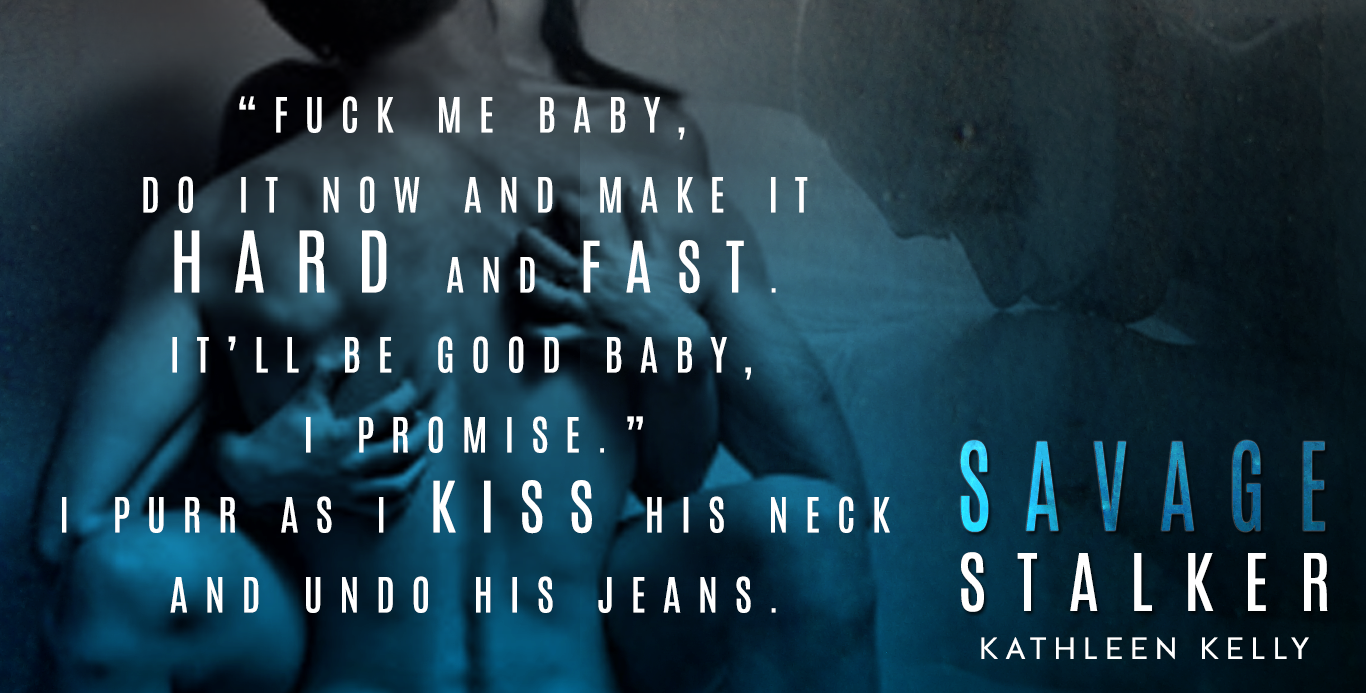 Kathleen Kelly was born in Penrith, NSW, Australia. When she was four her family moved to Brisbane, QLD, Australia. Although born in NSW she considers herself a QUEENSLANDER!!

She married her childhood sweetheart and they live in Brisbane with their two furry kids. A British Short Hair called Grace and a Burmese called Jack.

Kathleen enjoys writing contemporary, romance novels with a little bit of erotica. She draws her inspiration from family, friends and the people around her. She can often be found in cafes writing and observing the locals.

If you have any questions about her novels or would like to ask Kathleen a question she can be contacted via e-mail: kathleenkellyauthor@gmail.com or she can be found on Facebook.