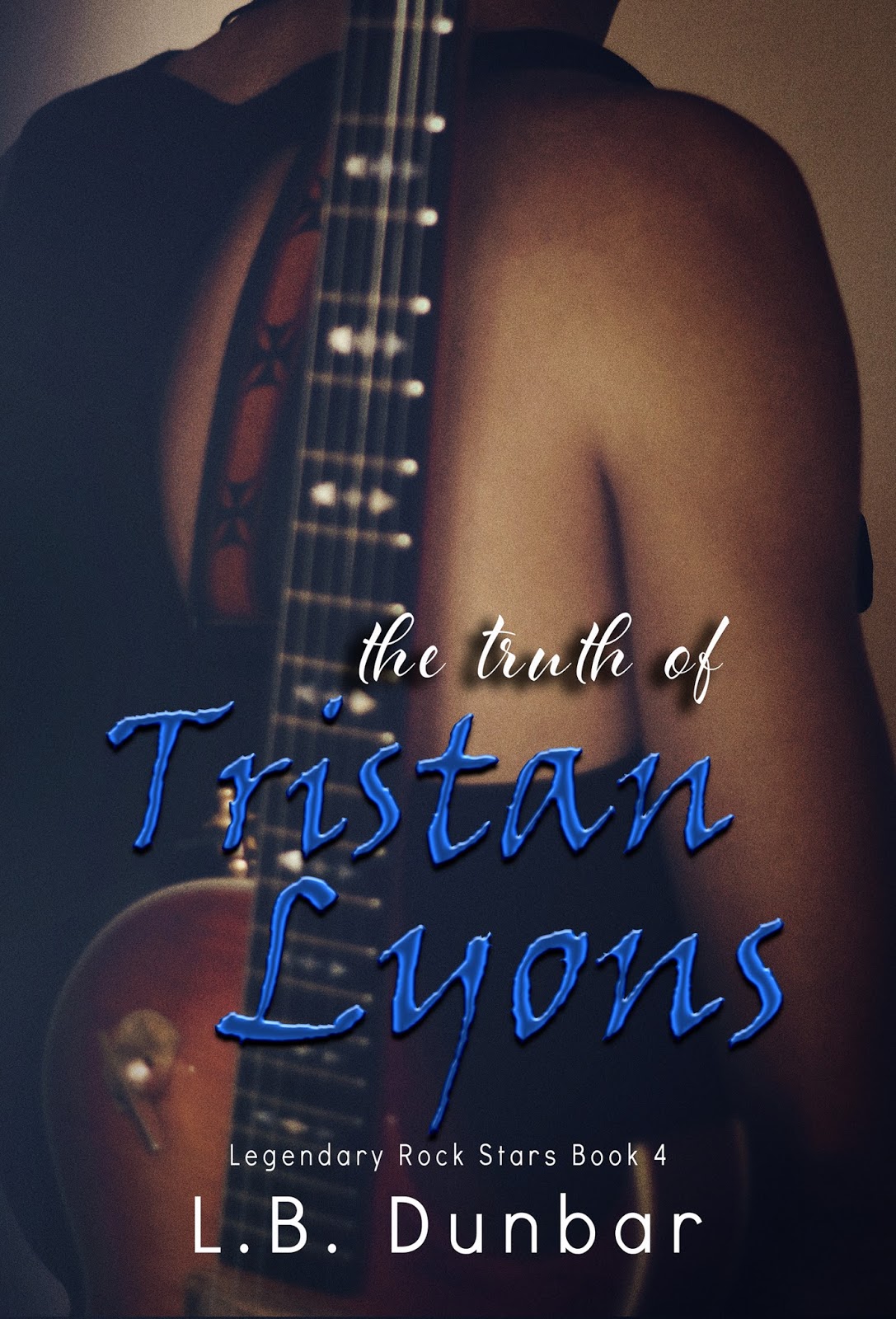 I understand why I have the nickname. Hey, what can I say? I like women. All women. It doesn't matter what shape, size, or color. I'm even into sharing. I've done it all, seen it all, but I'm at an all-time low. Who wouldn't be? My best friend is missing. My uncle's an asshole. I don't know who I am without The Nights. We are a band of brothers, soldiering through the world with our music. Only, our faithful leader is gone, and everyone else in the band is falling for the oldest trap: love. Love is a lie. It is painful. It is hurtful.

I need a break. I want to be alone. I'm not prepared to share the exclusive home on the Island. I'm not prepared for her. I don't know who she is or why she's here. She tells me to call her Ireland. I tell her my first name only. Originally, I don't want to believe she doesn't recognize me. Bass guitarist for The Nights, come on? After a while we both play the game. Secrets are another form of lies, aren't they?

Our fantasy will crash to reality too soon. Secrets catch up to you. The truth has to be told. It confirms what I already know: love is a lie.

"Hey," I said grabbing her upper arm. "How did you get in here?"

She seemed caught unaware of my approach and screamed loudly, pushing at my chest hard enough, the sheer surprise forced me to let go of her.

With her hand on her chest and her breasts rising and falling in great agitation, I was able to see her big blue eyes and the sprinkle of freckles across her nose. Her chin length blonde hair fell forward as she bent to clasp her knees and catch her breath.

Standing up almost as quickly as she bent over, she spoke to me through delicious looking pink lips.

"Who the fuck are you?" she growled.

"You know what, never mind. You need to go," I said, cutting her off and reaching for her upper arm again. "I don't know how you got in here, where you came from, or how you found me, but you need to go."

I began to tug her toward the front entry, her feet sliding in her flip-flops across the tile flooring. She pulled back, and the force made her skid on an angle across the slippery surface as I dragged her. She continued to glare at me quizzically, leaning away from me.

"I don't know what you are talking about?"

"Did you follow me, is that it? See me in the airport?"

"What are you talking about?"

"Don't pretend you don't know who I am?"

I stopped, still holding firmly to her arm. Something in her voice sounded like she was being serious.

She blinked, confusion clearly on her face. I was thoughtful for a moment. It was the innocence in her blue eyes, and the fact she looked like she might cry. Something wasn't right with this scenario.

"Trist – an," I said slowly, as if she had some type of hearing impairment.

I narrowed my eyes at her.

"What kind of music do you listen to?"

"Country," she answered so quickly, she didn't even blink an eye or stop for thought. On top of that, she said it in such a way that showed she was thoroughly confused, and almost disgusted with me, for even asking such a ridiculous question. She wrinkled her nose.

"Look, I know the owner, and you shouldn't be here."

"I know the owner," I repeated, "and you shouldn't be here."

"I'm not leaving," she said, pulling at her own arm again and sticking out a hand to press against my chest as leverage. I had tugged my shirt off at some point while I was passed out, and her warm hand felt good on my air-conditioned cool skin. Her hand was tiny, I noticed. All of her was thin.

"I'm supposed to be here. Alone," I emphasized again.

She didn't respond, so I added, "I think I'll just call the owner myself, to see where the mix up is."

"No," she blurted, stopping in her physical struggle against me. Her eyes opened even wider, if that was possible, and her face was suddenly full of something I couldn’t read. Her blue eyes brightened in a frightening sort of way. Was that fear? Good, she should be afraid.

"Please. I swear. I'm allowed to be here. You don't need to call Isa."

She had me. I didn't really know who Isa was, and the girl sounded confident enough that I let her call my bluff.

"If there is a mistake, and you were scheduled to stay as well, I won't complain. As a matter of fact, I won't even be in your way. You won't even know I'm here. I plan to keep to myself." Her eyes were glassy, and again I worried she was about to cry.

I released her arm and she pulled it back quickly. She fisted the hand of that arm, holding it against her chest. She began rubbing her upper arm with the opposite hand. I noticed again that she was thin, as were her breasts. I didn't care for small chested girls. I didn't care for her.

"Well, I'm Tristan, whom you claim to not know, and you are?"

I shook my head.

"So this is how we're going to play it? Fine, my Irish Isle. What are you doing in the Caymans?"

She looked at me for a moment, then leaned toward me and sniffed. She held the disgusted expression on her face and wrinkled her nose as she pulled back.

"Probably the same thing as you."

"Drinking myself into oblivion?" I laughed, crossing my arms over my bare chest defensively. 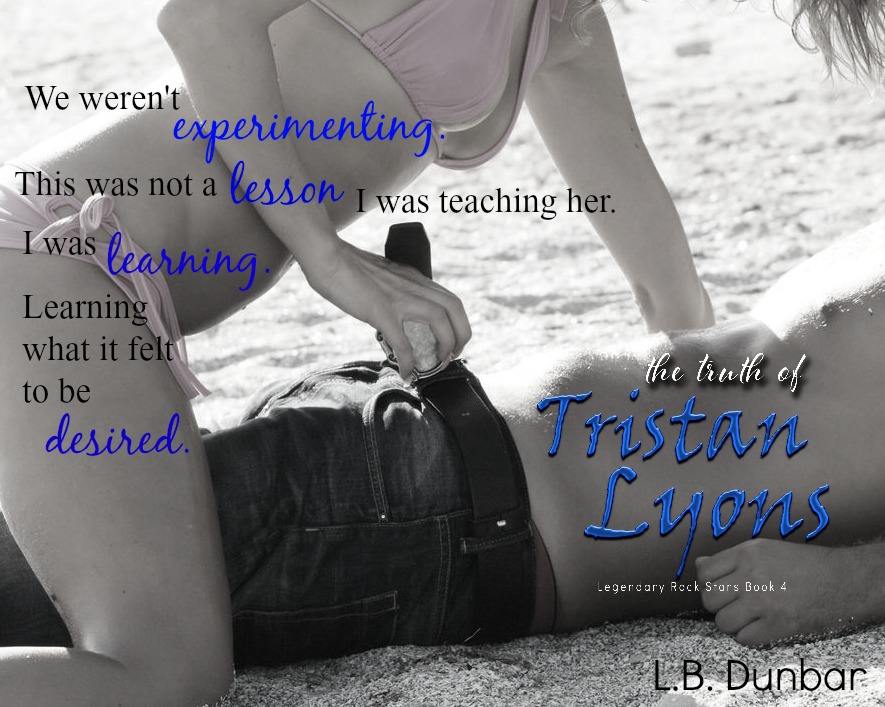 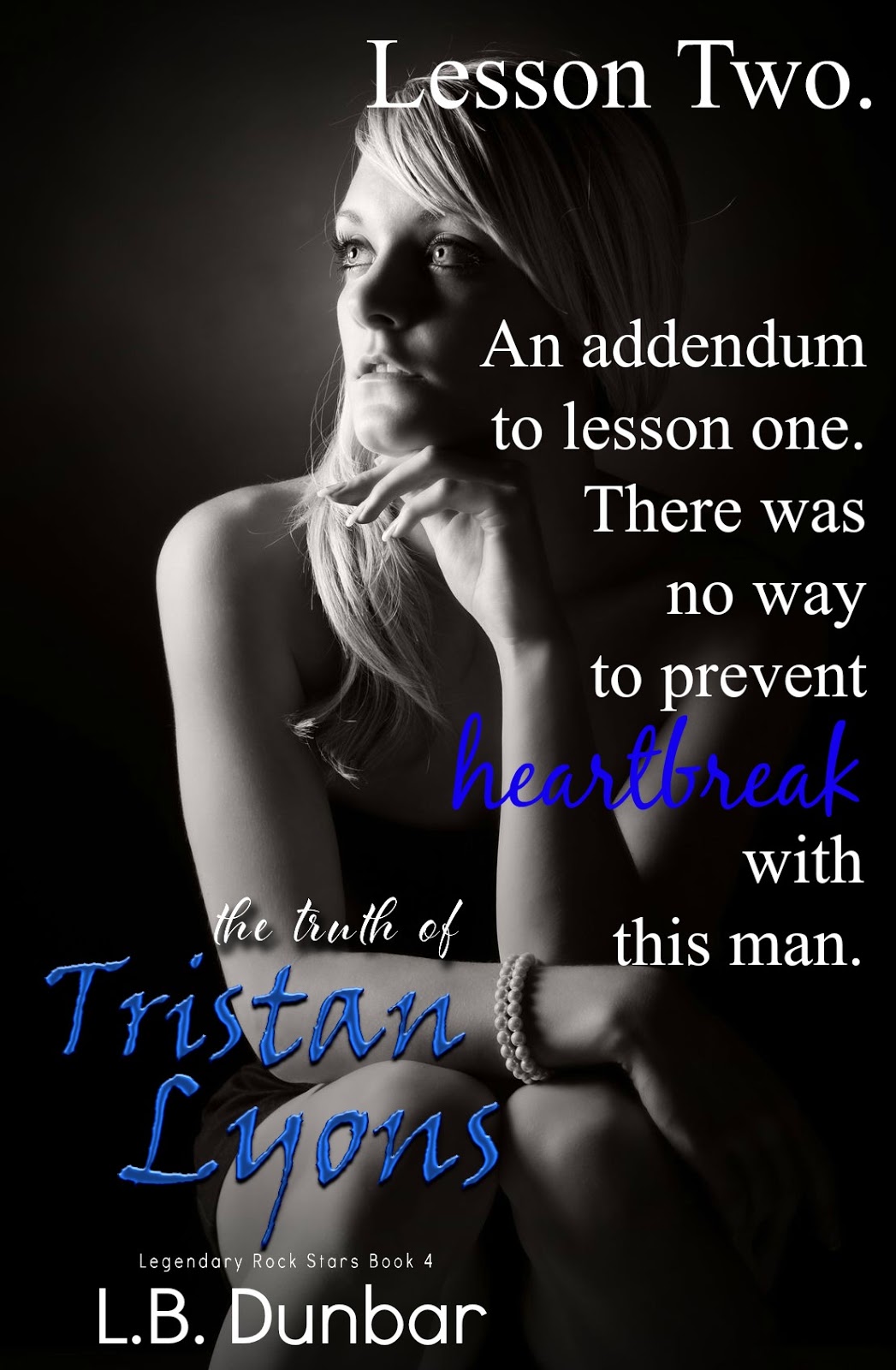 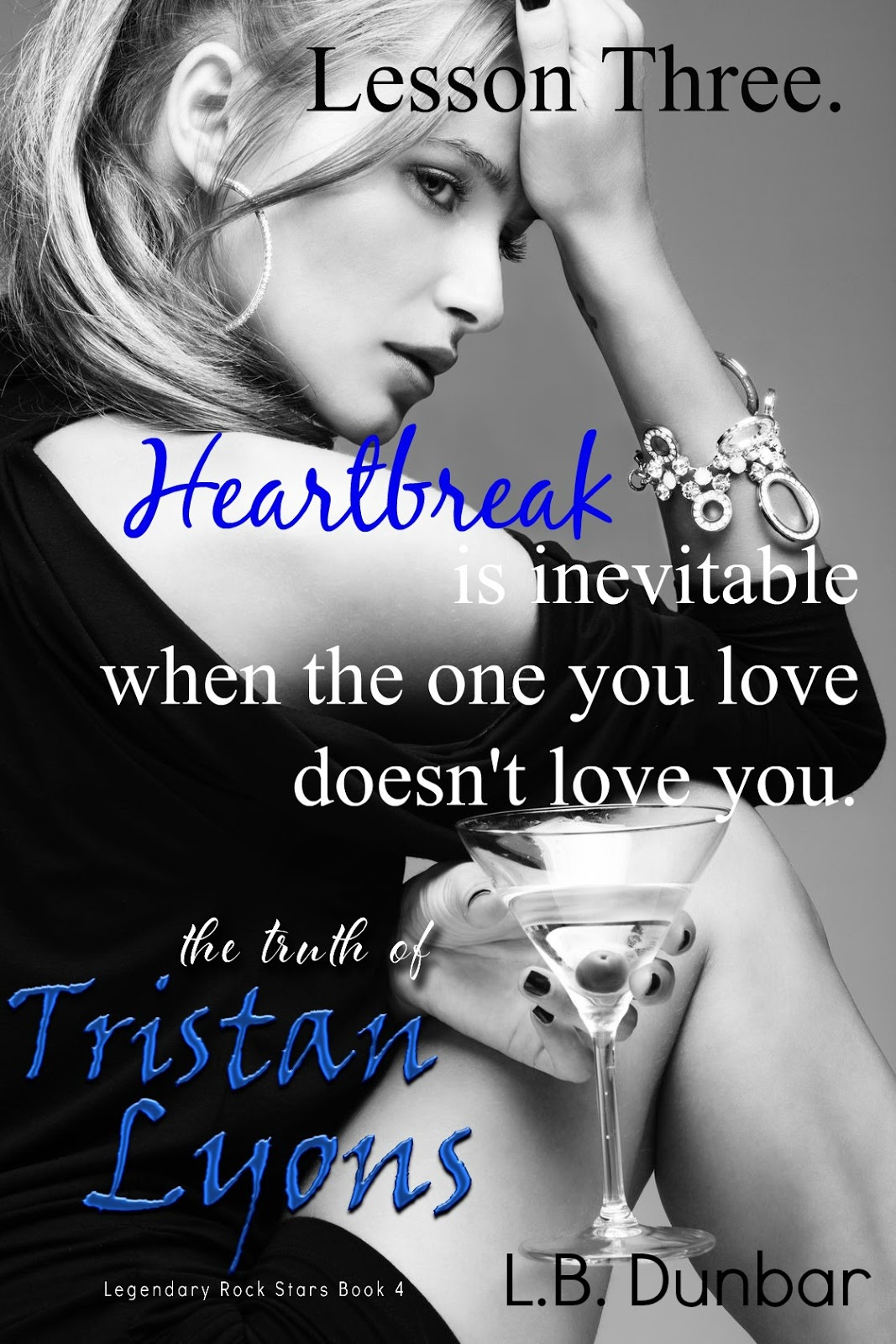 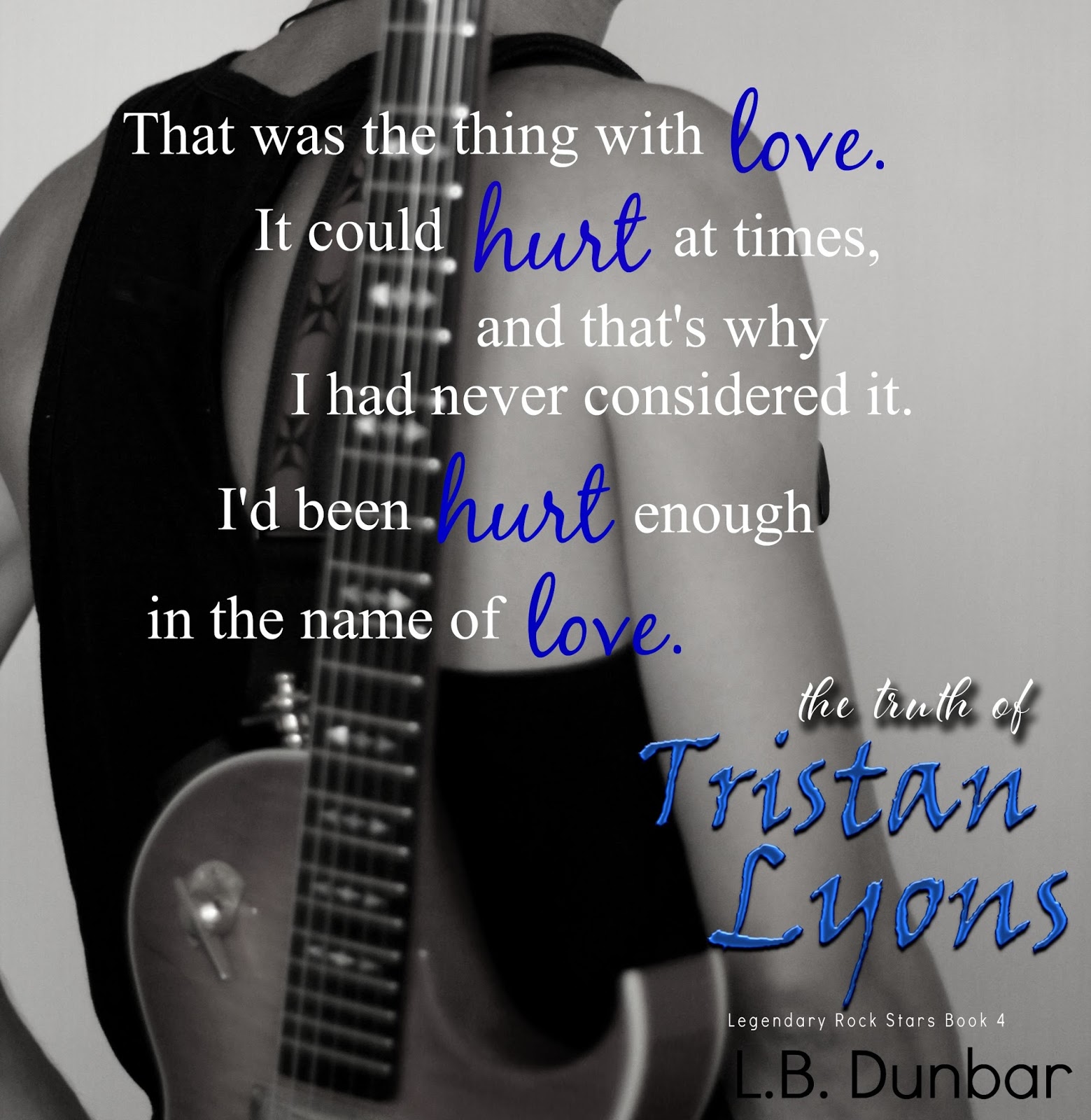 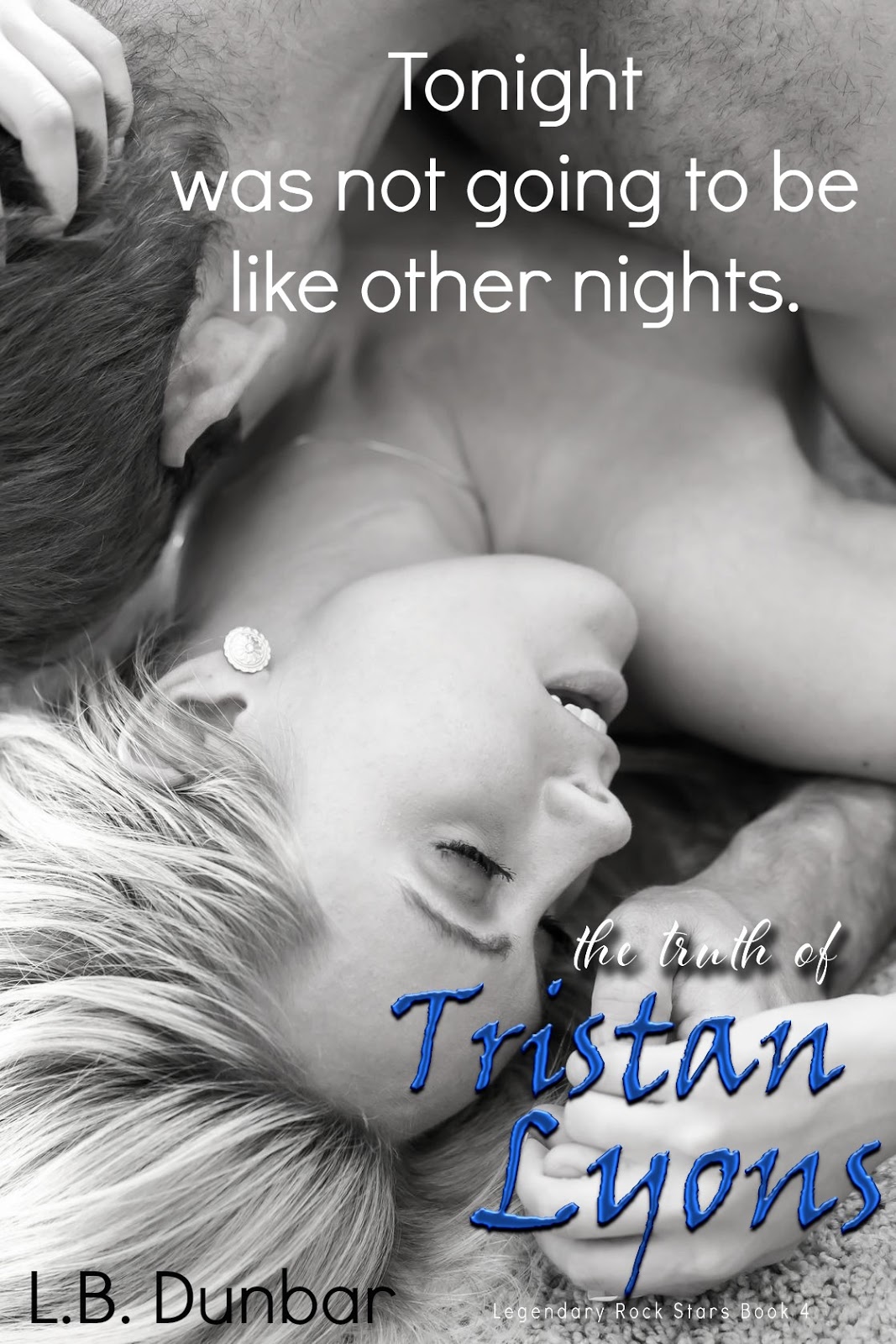 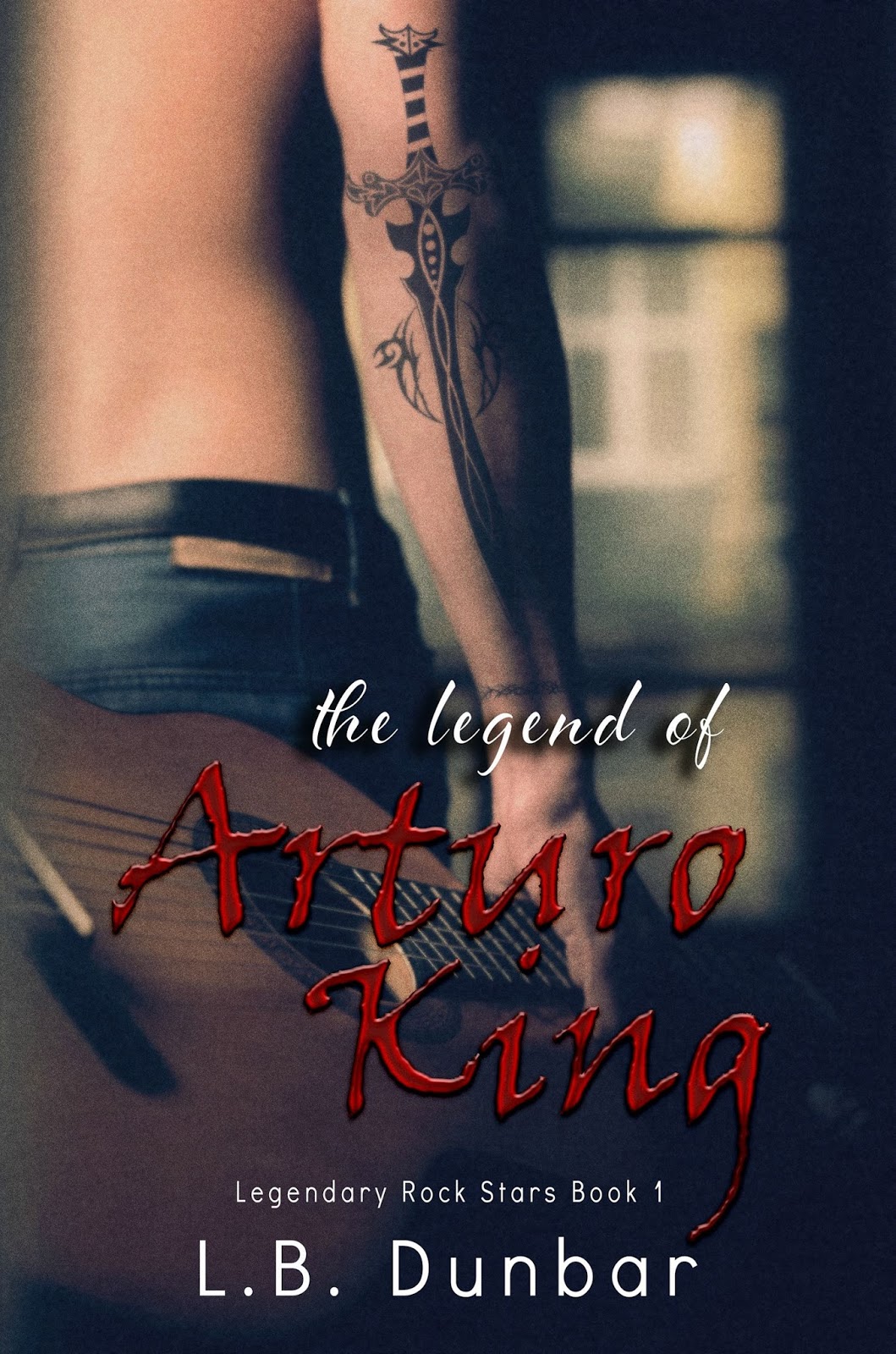 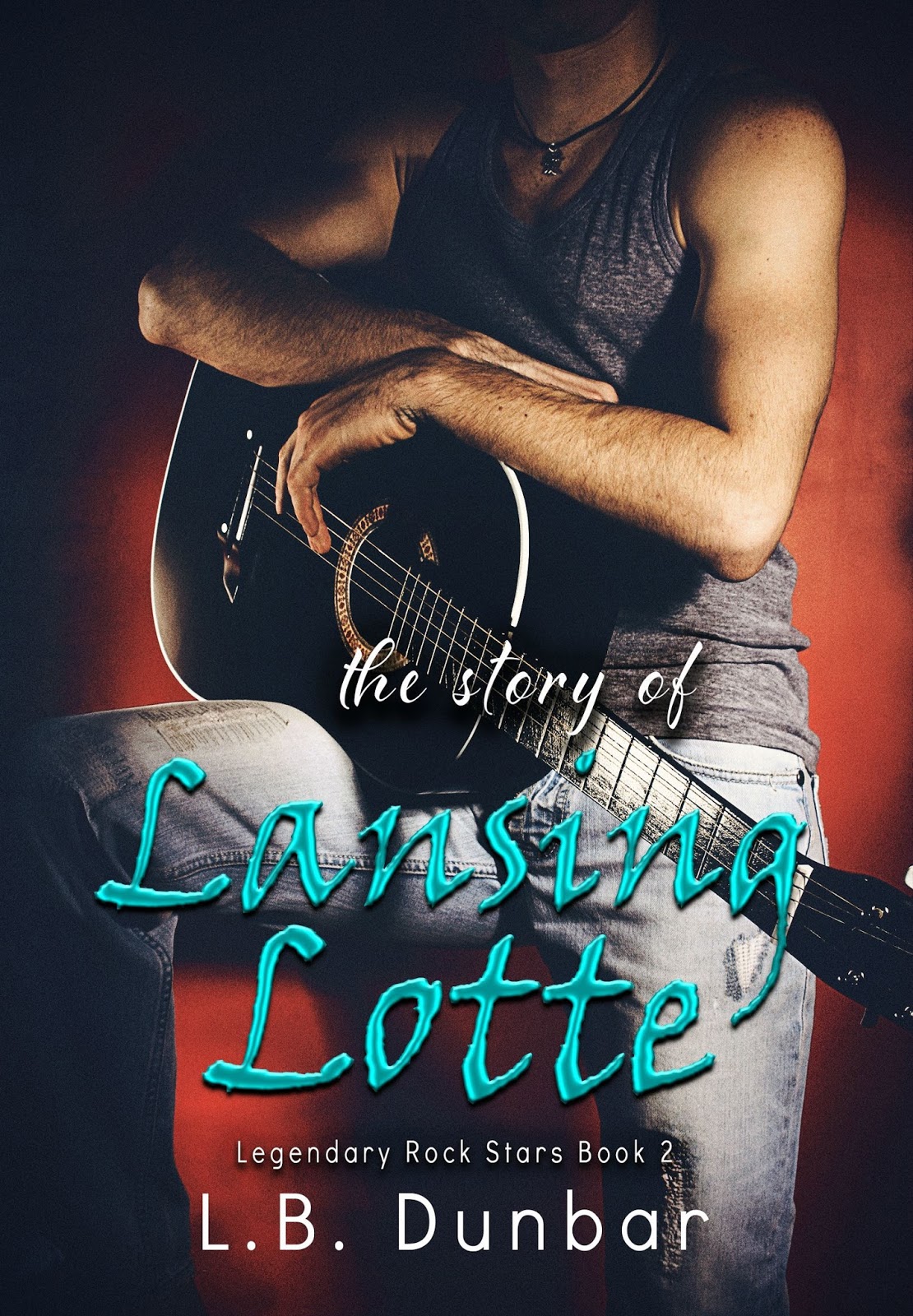 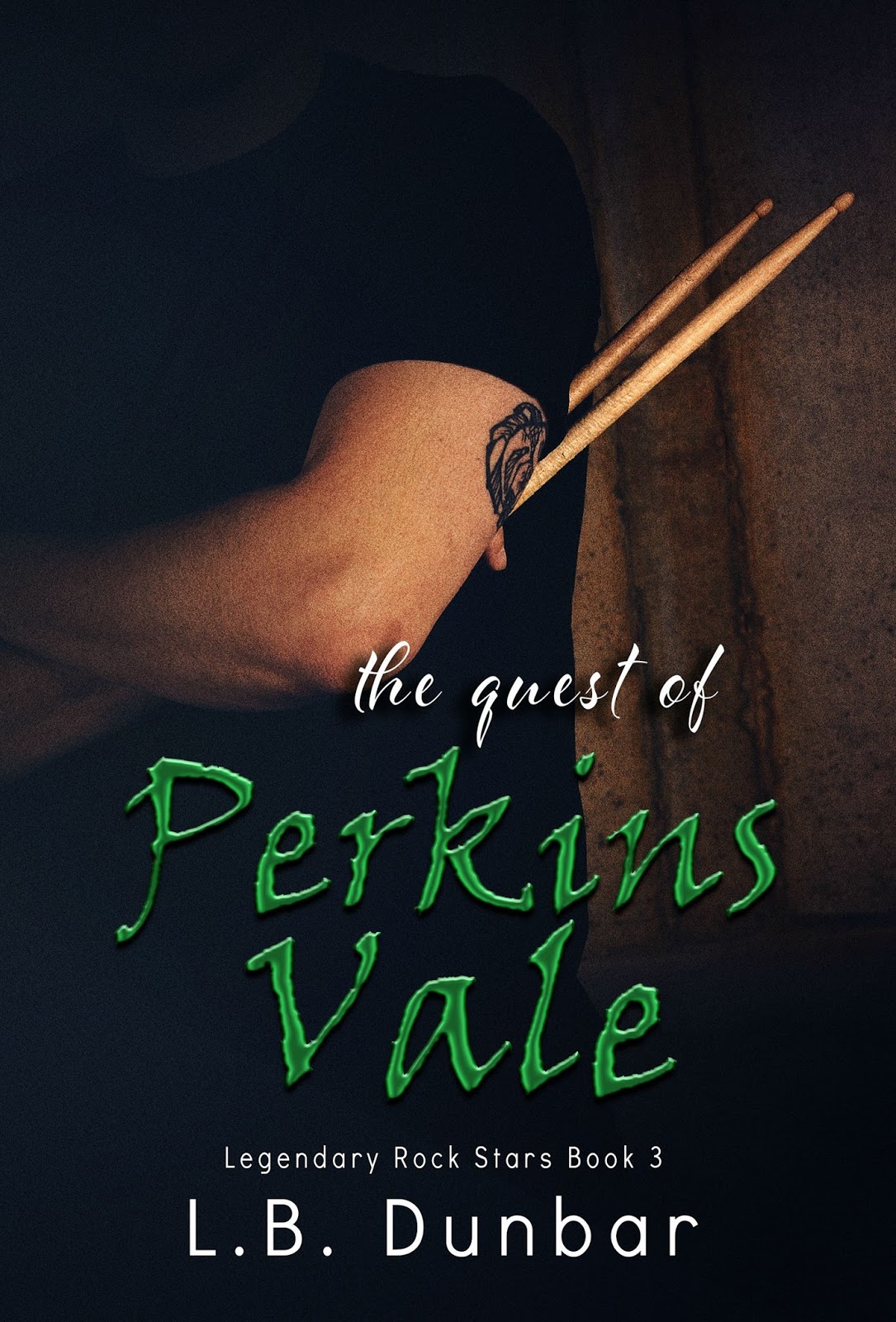 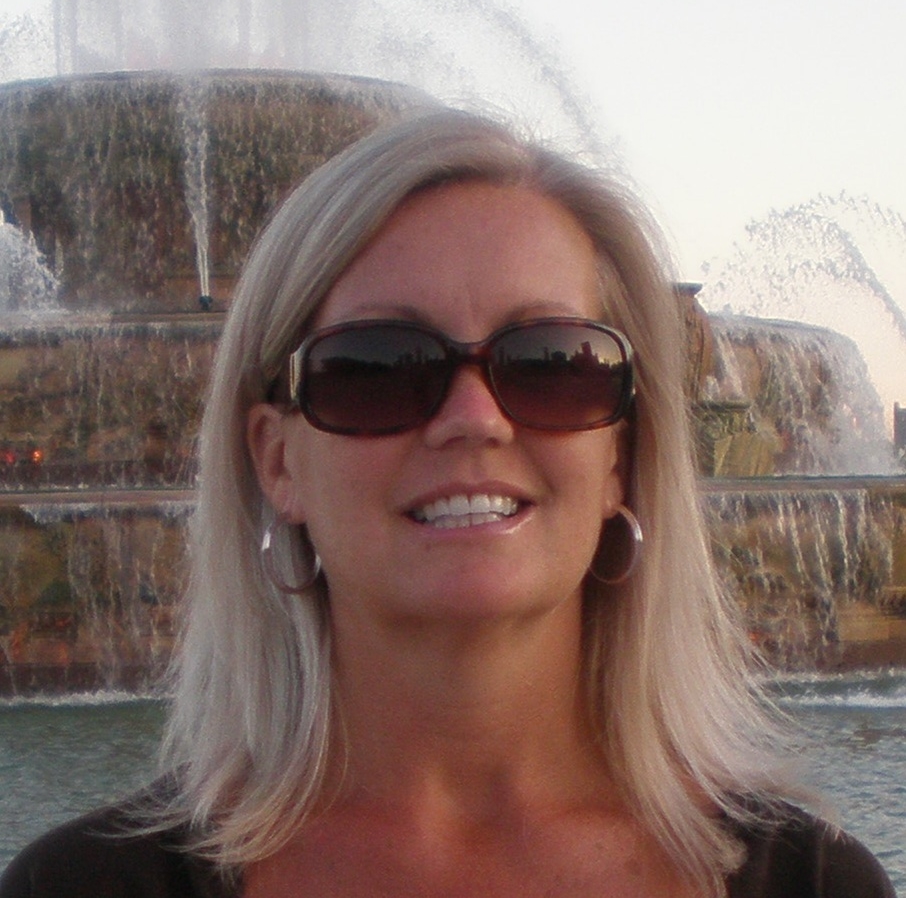 L.B. Dunbar loves to read to the point it might be classified as an addiction. The past few years especially she has relished the many fabulous YA authors, the new genre of New Adult, traditional romances, and historical romances. A romantic at heart, she's been accused of having an overactive imagination, as if that was a bad thing. Author of the Sensations Collection, Sound Advice, Taste Test, Fragrance Free, Touch Screen, and Sight Words, she is also author of the Legendary Rock Star series, beginning with The Legend of Arturo King. She grew up in Michigan, but has lived in Chicago for longer, calling it home with her husband and four children.

I'd like to say I was always a writer. I'd also like to say that I wrote every day of my life since a child. That I took the teaching advice I give my former students because writing every day improves your writing. I'd like to say I have my ten-thousand hours that makes me a proficient writer. But I can't say any of those things. I did dream of writing the "Great American Novel" until one day a friend said: Why does it have to be great? Why can't it just be good and tell a story?

As a teenager, I wrote your typical love-angst poetry that did occasionally win me an award and honor me with addressing my senior high school class at our Baccalaureate Mass. I didn't keep a journal because I was too afraid my mom would find it in the mattress where I kept my copy of Judy Blume's Forever that I wasn' allowed to read as a twelve year old.

I can say that books have been my life. I'm a reader. I loved to read the day I discovered "The Three Bears" as a first grader, and ever since then, the written word has been my friend. Books were an escape for me. An adventure to the unknown. A love affair I'd never know. I could be lost for hours in a book.

So why writing now? I had a story to tell. It haunted me from the moment I decided if I just wrote it down it would go away. But it didn't. Three years after writing the first draft, a sign (yes, I believe in them) told me to fix up that draft and work the process to have it published. That's what I did. But one story let to another, and another, and another. Then a new idea came into my head and a new storyline was created.

I was accused (that's the correct word) of having an overactive imagination as a child, as if that was a bad thing. I've also been accused of having the personality of a Jack Russell terrier, full of energy, unable to relax, and always one step ahead. What can I say other than I have stories to tell and I think you'll like them. If you don't, that's okay. We all have our book boyfriends. We all have our favorites. Whatever you do, though, take time for yourself and read a book.