Today we're having the blog tour for When Fates Collide!!

I am so excited to share this book to you.

Isabelle has shared the playlist with us as well as a giveaway, so be sure to read all the way to the bottom!!

Life can change in the blink of an eye. One moment, Lily is trapped in a loveless marriage. In a split second she is free, but at what cost? Her mundane life is set into a freefall of tragedy and terror. Her husband may be out of her life, but he left a storm of collateral damage behind and the burden is on Lily to sort it out.

Fate connects Lily with Gavin, a charmingly handsome British gentleman that has been drawn into her tangled circumstance. Gavin is everything Lily's husband wasn't and gives her hope that love really does exist. Gavin wants nothing more than to sweep Lily up and carry her off into the sunset, far away from the devastation left behind by her husband. Gavin has been the first breath of fresh air in her life, but she isn't looking to be saved. She needs to clean up her husband's mess and find a way to save herself in the process.

Does she throw caution to the wind and open her heart? Or listen to her head that tells her and go it alone until she's found herself again?

Can a romance that was written in the stars survive real life? Lily Clark and Gavin Edwards met when their lives collided in a crazy twist of fate. Their relationship started amidst chaos, fraught with lust, passion, and love. Building a life together will take more than destiny, especially when ghosts from their past try to tear them apart.

Needing a fresh start, Lily decides to escape her life in Washington, DC to join Gavin in London. Trust and faith have never come easily to Lily. She'll be put to the test now that she and Gavin are living under the same roof.

To make matters worse, trouble finds Lily wherever she goes. She thought she'd rid herself of her late husband's demons, but she soon learns that when you make a deal with the devil, he often comes back to up the ante. Can she learn to let Gavin in or will she continue to fight her battles alone? Find out what happens When Fate Isn't Enough.

Isabelle Richards spent years as a speech writer before tackling fiction. An avid reader of all genres, Isabelle is drawn to romance novels as they provide an escape from daily life. Through her complex cast of characters, Isabelle creates a sanctuary for readers to dive into for a break from reality.

When she is not writing, Isabelle works as an advocate for persons with disabilities in Washington, DC. Her two yellow labs are her writing partners, although they frequently sleep on the job. Losing her was the hardest thing he'd ever endured...

Warrior shifter Aiden's investigation of the trafficking of vampire blood leads to a startling discovery: the beautiful vampire bondmate he thought was dead. Decades ago, they'd defied their powerful families to be together, but then Larissa disappeared without a trace. When their mating link broke, it nearly destroyed Aiden. Now she's back with no memory of where she's been. Even more shattering — Larissa claims she has no idea who Aiden is.

It's a race against time to bring down an operation more evil than his pack ever suspected, and Aiden finds himself working side by side with a mate who no longer trusts him — and she wants out. But he lost her once, and he won't let her go again. Unfortunately, Larissa's blood is the key to a powerful monster's dangerous plan — and he'll stop at nothing to destroy her, sparking off a war between the supernaturals and humans that no one will win.

Under normal circumstances Aiden would be more invested in what was going on, but with Larissa in his arms it was hard to think about anything other than her. When she shifted against him, murmuring something under her breath, he froze.

She was waking up.

One of her elegant hands slid up his chest and wrapped around the back of his neck as she nuzzled the other side of his neck. His entire body shuddered at the contact and he had to force his body under control.

Unfortunately that was impossible.

Her hand slid back down his chest and her fingers curled against his skin when she suddenly froze and pulled her head back. Her indigo eyes met his with pure confusion. She looked at him, then Connor, then back at him. It wasn't overt but she scented the air, as if she was unsure what they were. Which didn't make sense. She knew him.

"Larissa," he whispered. "How are you feeling?"

"Who are you? Where am I?" She spoke in perfect English but with a slight lilting accent that couldn't really be linked to any country.

When he'd met her she'd spoken twelve languages, English being one of them. Hearing her talk had always brought Aiden joy, but now she stared at him as if she didn't know him. And he scented her fear.

True fear. Sharp and pungent. From the one female he'd do anything for. Would die for. And she was afraid of him. There was no acidic stench of a lie followed by her words either. She didn't know who he was. Aiden felt as if he'd been gutted. "You don't know me?"

Watching him warily, she slowly backed up until she was at the SUV door. "Should I?" She seemed to finally register his state of undress. "Why are you naked?" she shouted.

She moved with a wicked fast speed, turning and punching the whole door off the SUV. The metal groaned as it snapped off and slammed against the road with a sickening crunch behind them. Connor slammed on the brakes as Aiden lunged for her. She was too quick, diving out the door while they were still moving. She was a blur of movement, her hair fanning out behind her as she flew across the snowy embankment next to the highway and disappeared into the trees.

Aiden didn't waste time. He dove from the vehicle and had gone wolf before his paws hit the snow. 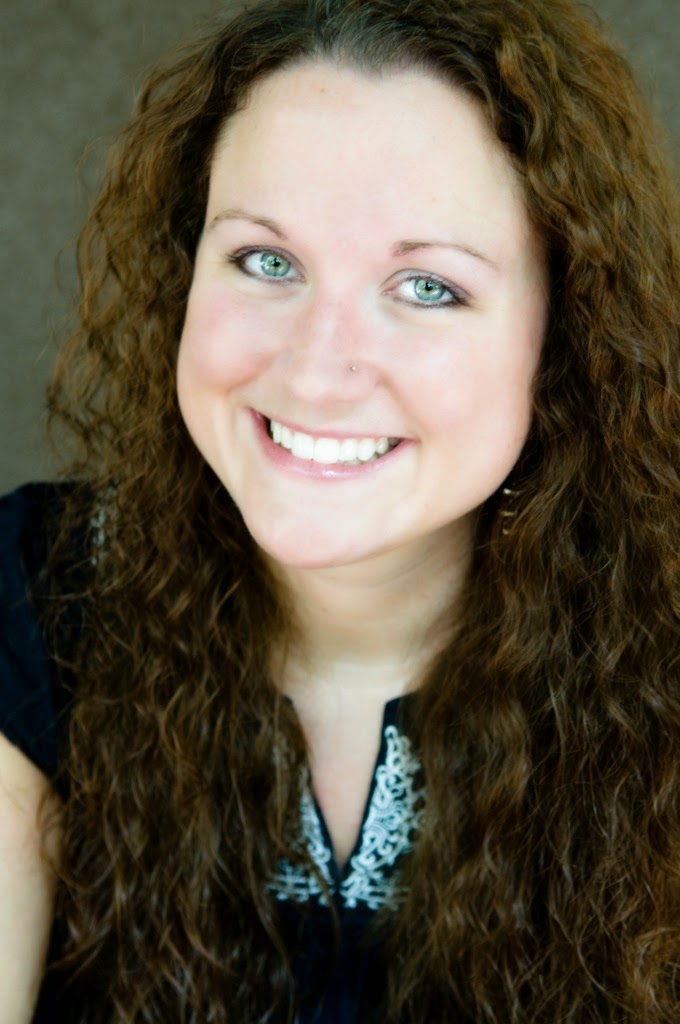 Katie Reus is the New York Times and USA Today bestselling author of the Red Stone Security series, the Moon Shifter series and the Deadly Ops series. She fell in love with romance at a young age thanks to books she pilfered from her mom's stash. Years later she loves reading romance almost as much as she loves writing it. However, she didn't always know she wanted to be a writer. After changing majors many times, she finally graduated with a degree in psychology. Not long after that she discovered a new love. Writing. She now spends her days writing dark paranormal romance and sexy romantic suspense. 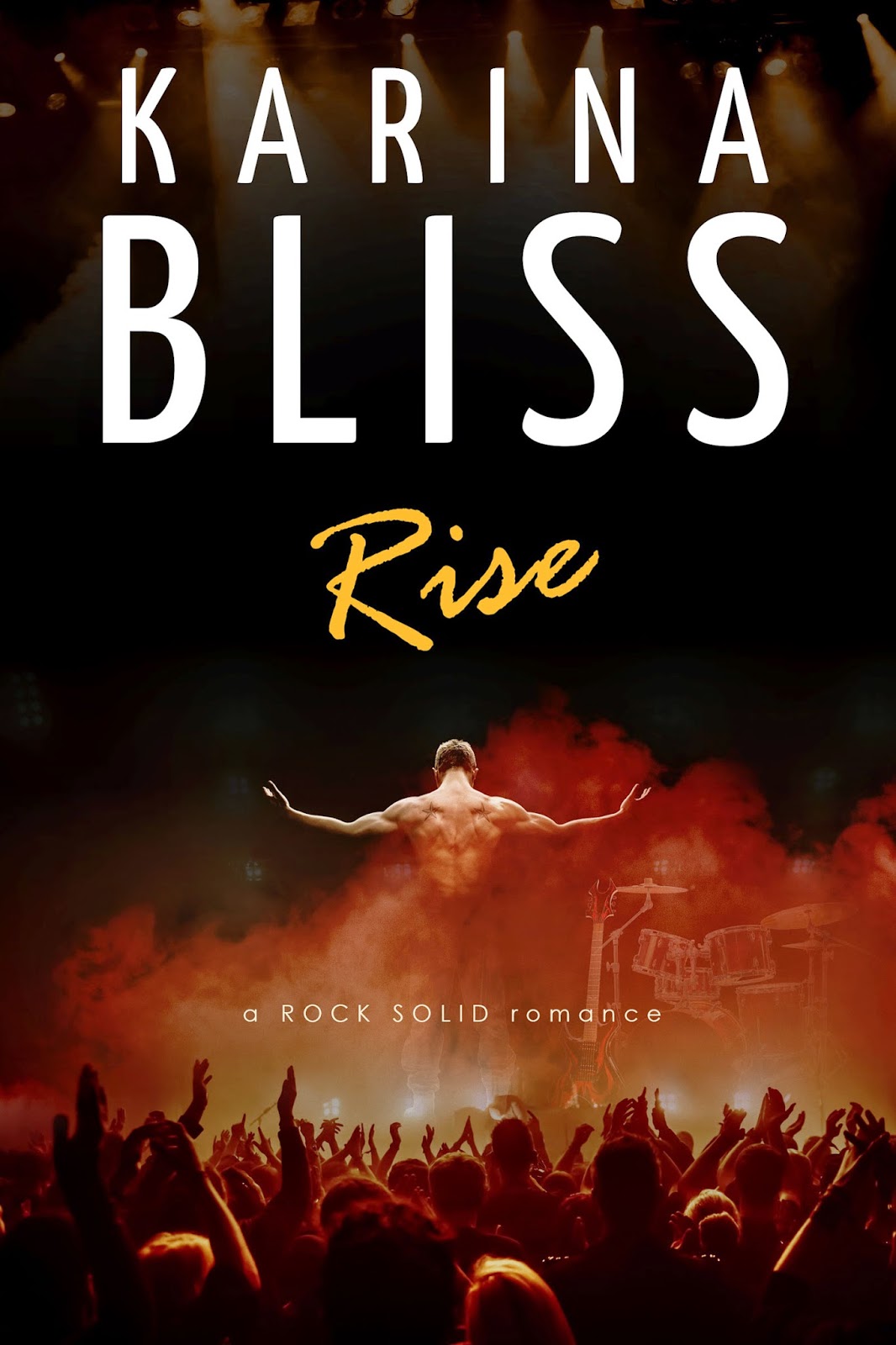 "You have the ability to make controversial characters sympathetic. Maybe I just want to be understood."

In short, everything she sought in a biography subject. When in her life will she get another chance to work with a living legend? But saying yes to one temptation soon leads to another.

Suddenly she's having heated fantasies about her subject, fantasies this blue-eyed-devil is only too willing to stoke. She'd thought self-control was in her DNA, after all she grew up a minister's daughter. She thought wrong.

Outside your comfort zone is the only place worth living...

Zander Freedman has been an outlier - many would say an outcast – for most of his life. But there’s no disaster he can't overcome, from the break-up of his band to the fall-out on his reputation. His Resurrection Tour is shaping up to be his greatest triumph - if his golden voice holds out. Contracting a respected biographer is simply about creating more buzz; Elizabeth's integrity the key to consolidating his legacy as one of rock's greats.

All the damn woman has to do is write down what he tells her. Not make him think.

Or encourage the good guy struggling to get out. And certainly not to fall in love for the first time in his life.

Turns out he is scared of something - being known.

Rise - a redemption story of a rock star going straight(er) through the love of a good(ish) woman. 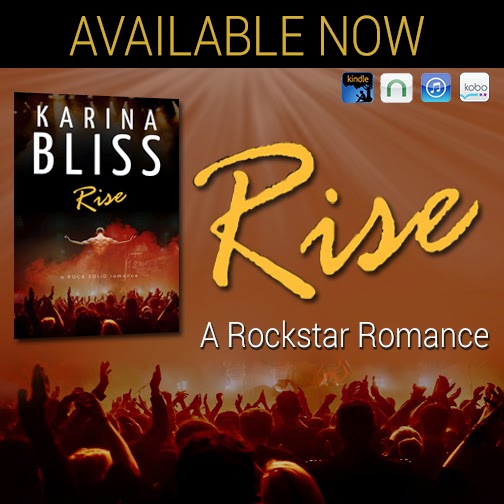 Why are rock stars so popular with readers?
By Karina Bliss


Oh sure, they're sexy, rich and famous but so are a lot of other fictional romance heroes. Here are four traits that distinguish rock stars from other bad-boy heroes:

1. They’re musically gifted, which means they're creative, playful, pre-disposed to sensitivity and have a sense of rhythm. Useful to our heroine in all sorts of ways...

2. They don't have to be alphas. The band dynamics throw up opportunities to write the artistically-sensitive beta. Not every hero has to be a showman, (though the hero of Rise, Zander Freedman, definitely is!). But because of their musical temperament, even the alpha rockers are more emotionally expressive than other hero types like your warrior or chief.

3. They're unobtainable. Every woman wants them but only one – the heroine – can win their heart.

4. They're born rebels. Musicians are genetically pre-disposed to being self-determining, stubborn and interesting individuals because they choose the road less traveled.

Do you agree or do you believe rock stars are the self-indulgent, depraved egotists my heroine expects Zander to be? Enter the Release Giveaway and go into the draw for an e-book of Rise.

New Zealander Karina Bliss's debut, Mr Imperfect, won a Romantic Book of the Year award in Australia, the first of eleven books published through Harlequin SuperRomance. Her most recent release, A Prior Engagement, was a Desert Island Keeper at likesbooks.com. Her next release, Rise, is a single title, self-published contemporary which continues the story of Zander Freedman, who first appeared as a villain in Karina's bestselling title, What the Librarian Did – a book that made DearAuthor's Best of the Year list in 2010. Two of Karina's books have also featured in Sizzling Book Chats at SmartBitchesTrashyBooks. 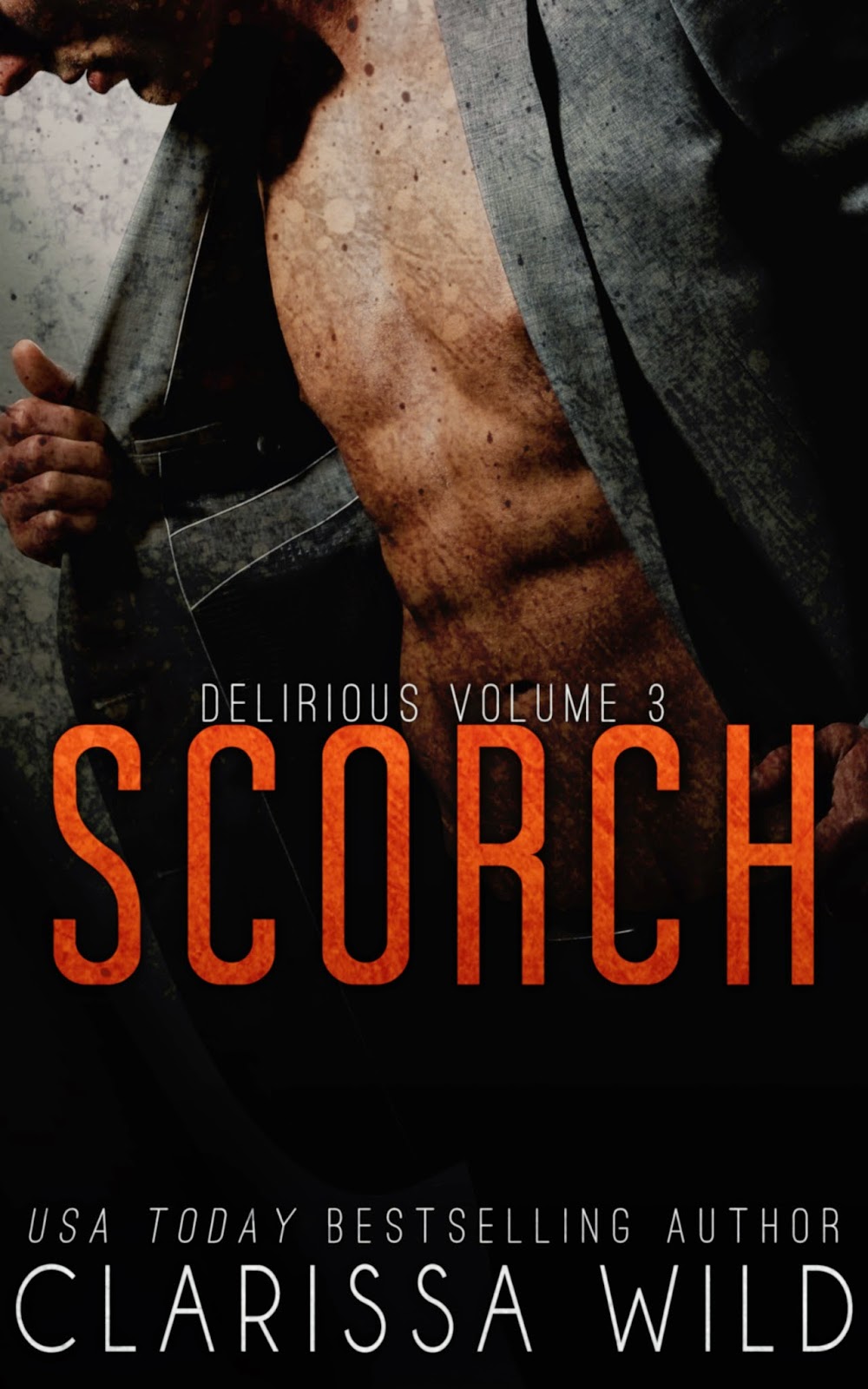 Sweet revenge keeps her alive... and drives her to kill.

I am the forgotten one, the girl who was left for dead.
In this mental hospital I call prison I plot my revenge.
I remember everything.
Their faces. Their touch. Even their smell.
What they did to me was beyond cruel. I'm going to return the favor.
In here I survive by using someone just as they used me. One of them wants to claim me as his own. A man without mercy, without a conscience, craving the wickedness inside me. But I won't be a puppet for his desires. I will play his strings like a puppeteer and use him to escape.
And when I do... I will kill them all.


This is Ashley's story and the final book in the Delirious Series. This is a full-length novel. These books should be read in order. 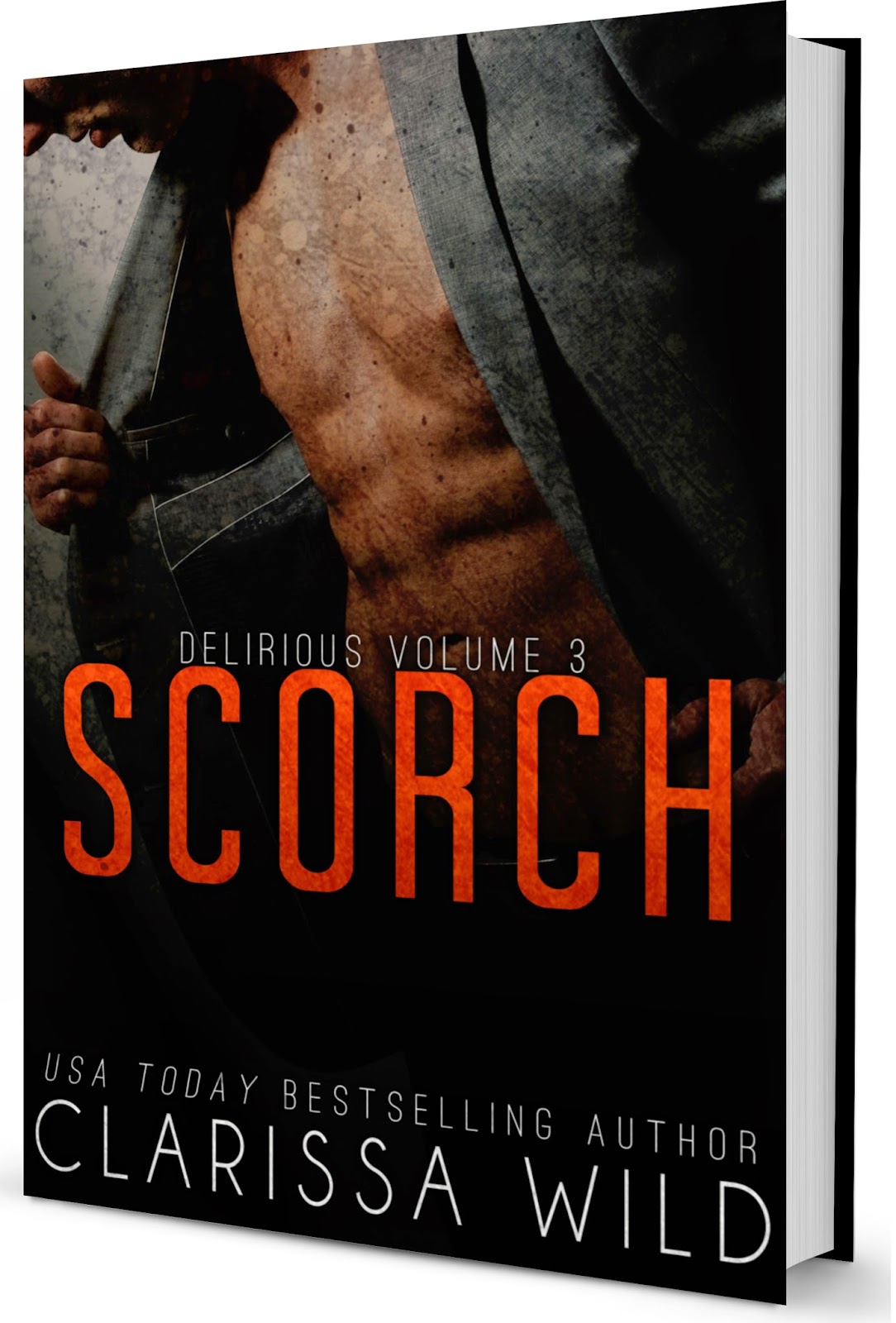 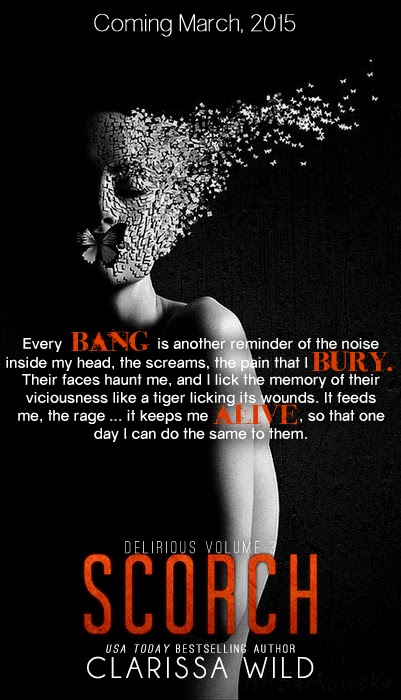 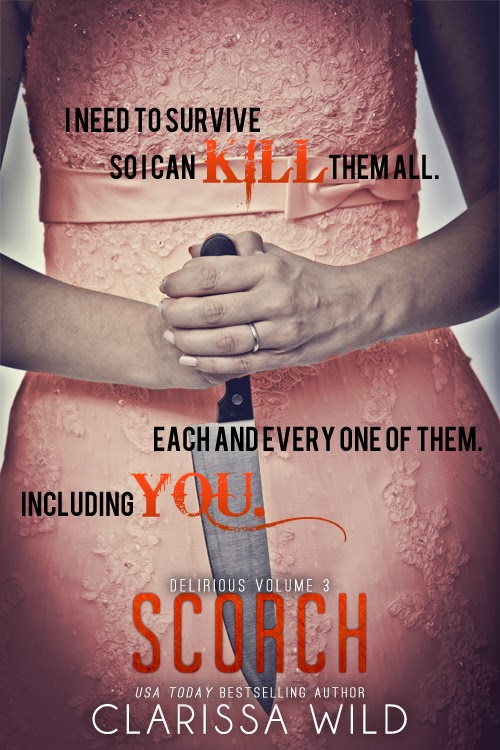 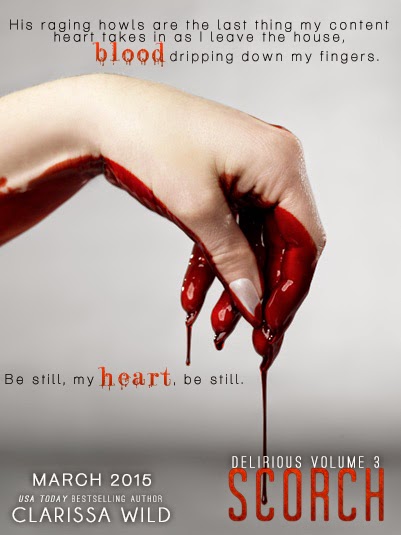 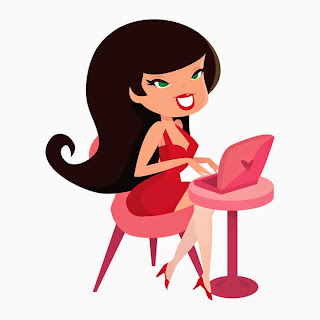 Check out my sexy books: http://smarturl.it/clarissawildbooks