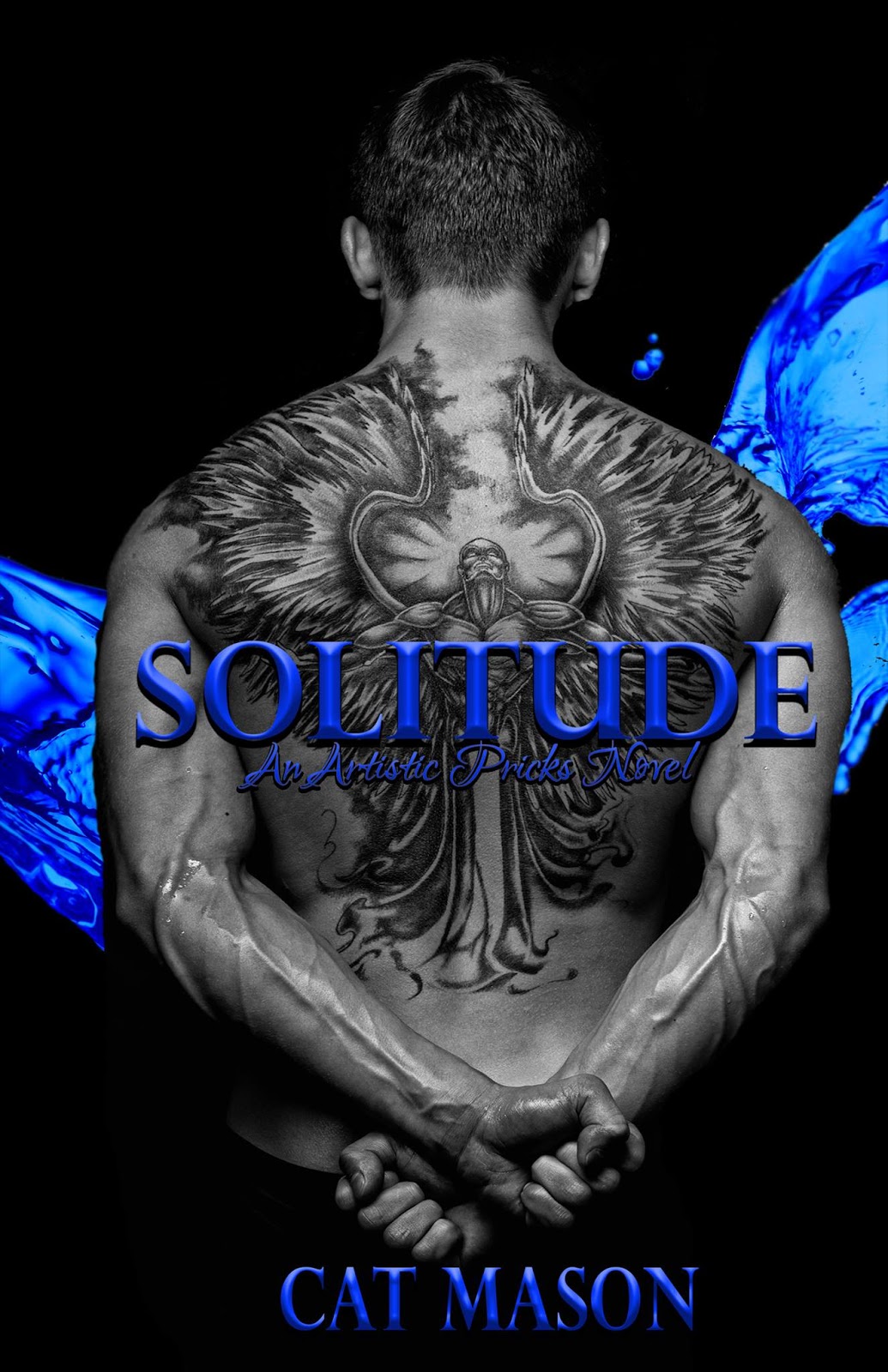 "The most powerful spark is the one that can reignite the fire that has long gone out."

After losing his fiancé, Mitchell Taylor abandoned everything that reminded him of her and retreated home to Las Vegas, Nevada. Now his life consists of three things: drowning his pain in the bottom of a vodka bottle, tattooing bodies in the shop he co-owns with his best friend and pissing off their office manager, Shelby. Not only does she infuriate him by challenging everything he does, but fighting with her pushes back the ghosts that haunt him.

Taking control of her future at a young age, Shelby Winston never let anyone or anything get to her. Until now. Mitch is unpredictable. One minute he is drunk and making her want to pull her hair out, the next he is doing something crazy like saving her life.

While every argument between the two has everyone around them waiting for bloodshed, something else is bubbling beneath the surface. There's no going back once you cross that line, and once the tension erupts into something else, it could change everything forever. 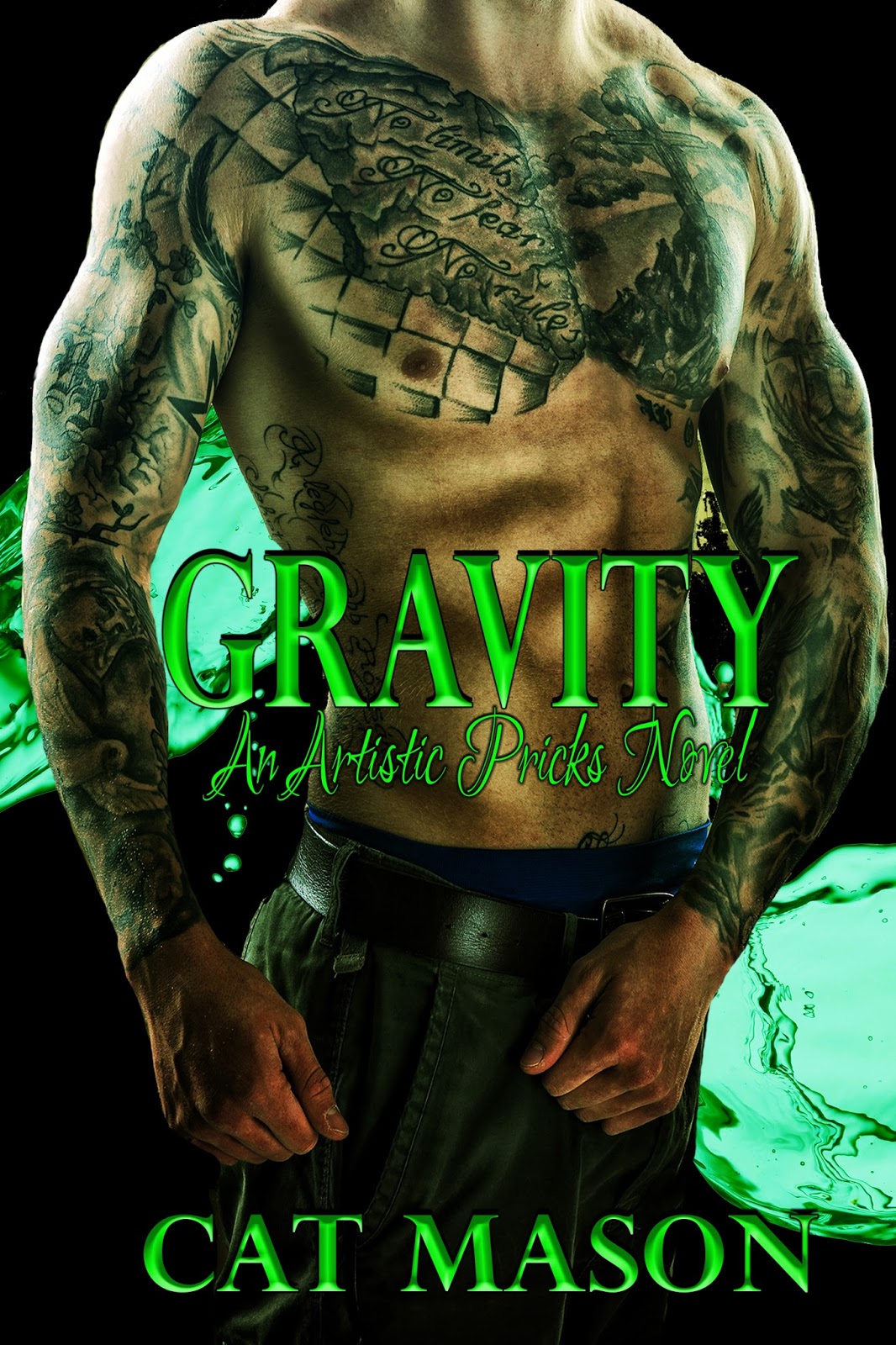 "There has to be something on this Earth that holds you here, other than Gravity."

Luke Hanlon was focused on anything but his own life.The happiness of everyone else came before his own. He worked hard to build Artistic Pricks Ink into the profitable business that it is today and yet, it isn't enough anymore. Something is missing. Someone.

With no one to focus on, but himself, Luke is forced to take a long hard look in the mirror and doesn't like what he sees. Then he meets his mom's neighbor and something clicks into place. But can he handle what comes along with her? Can he let go of the hurt in his past and see what is in front of him?

Kionna Slade is a good girl. She helps her neighbor, she doesn't go wild and crazy. She's independent and doesn't need anyone. After losing her mother and an accident stole her dream of being a Vegas Showgirl, her life took a turn in a direction she never dreamed it would. Now 'Sabrina' runs the show at night, allowing Ki to dance again. Keeping Kionna and Sabrina separate is her main goal, until Luke. Luke Hanlon will throw a wrench in everything she ever thought.

Lives are changed and things explode all around them as they are pulled together. Luke can't stay away, even if his heart and possibly both their lives could be threatened. Can Kionna and Luke find a way to hold onto each other or will they forever be grasping at what they can't have? 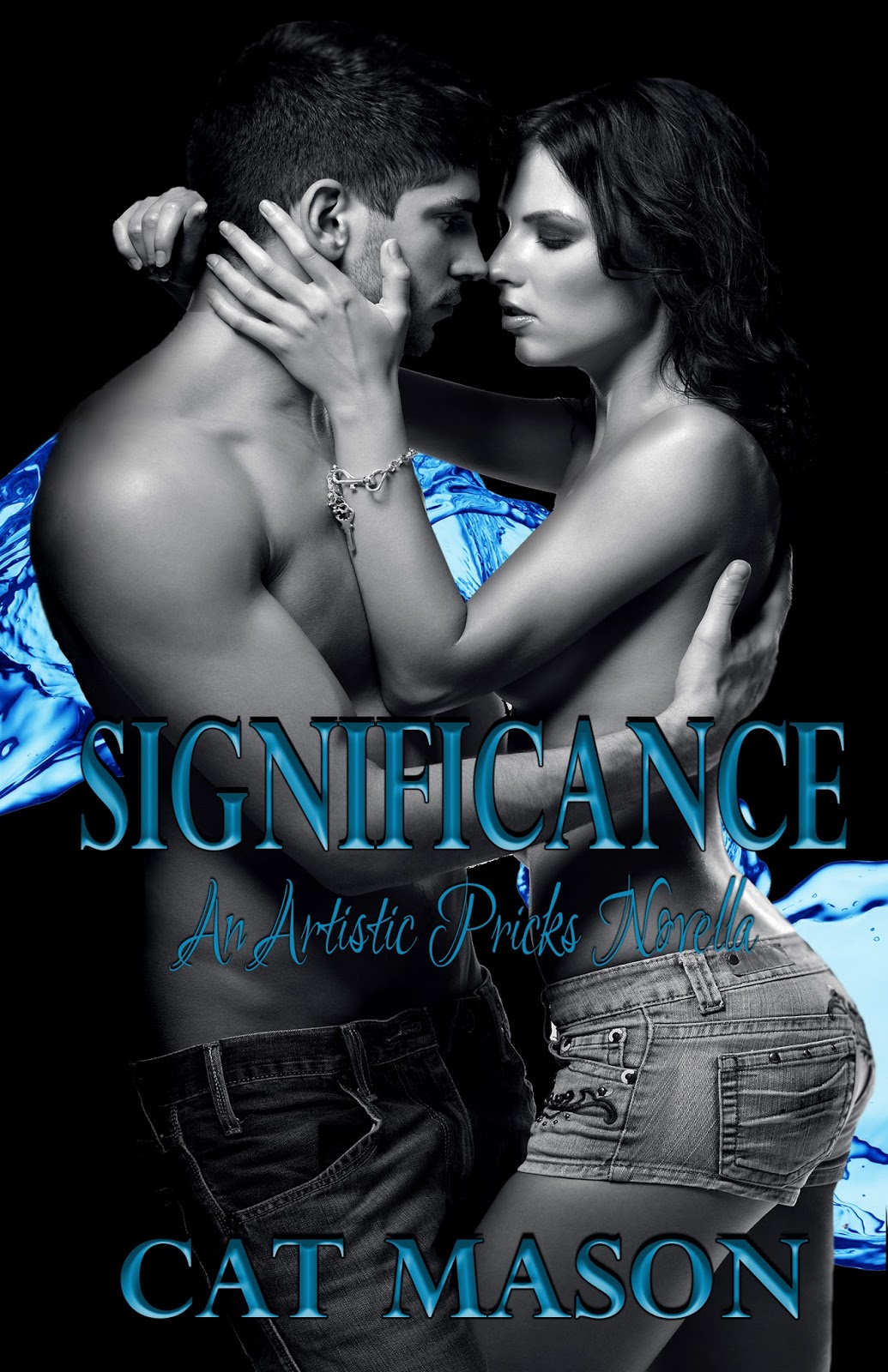 Mitchell Taylor has spent most of the last five years overseas serving his country. Finally home after months of being separated from his longtime girlfriend, Becky, has him ready for change.

Between celebrating and adjusting to him being home, the couple soon learn they aren't on the same page with their relationship. Pain, loss, maddening friends, and fear of the unknown will test them both as they come to terms with what is really important. Love.

Will Becky let fear and doubt rob her of the happily ever after with her sailor? Laughter, tears, triumph, and tragedy are all significant parts of life that we all face whether we like it or not. It's all how we deal with them that make us who we are.

This is their story.

Contains adult content and subject matter. Significance is prequel to Gravity, book one in the Artistic Pricks Ink series and a companion novella to Solitude, book two.

Cat Mason is a thirty year old, married mother of three. When she isn't writing; she is spending time with her kiddos or reading. She was born and raised outside of St. Louis, Missouri, just over the Mississippi River in Granite City, Illinois. Cat writes romance of all kinds with twists of humor.

Somewhere in Between
by
Samatha Harris 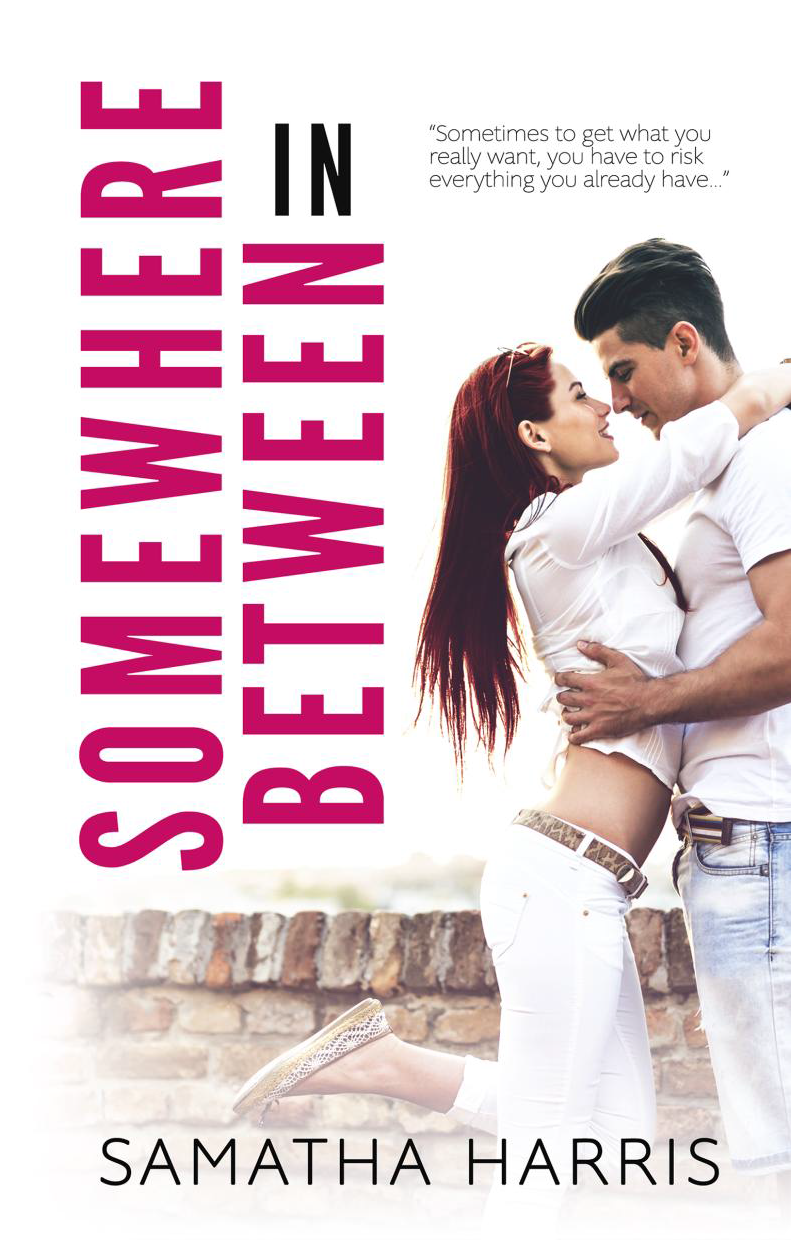 Alexandra McCabe is disconnected from the world, grieving the loss of her parents...

Content with studying and keeping to herself, Alex has no interest in the campus playboy, Drew Collins, trying to get close to her. But even dousing him with beer doesn't deter the easy-going charmer, and against her better judgment, the pair fall into a reluctant friendship.

Drew is bored with college life, and Alex's romantic rejection intrigues him...

Their friendship is good for both of them, but Drew is used to getting what he wants, and he's tired of shallow sorority girls. He's much more interested in the feisty redhead, but despite his growing feeling, Alex keeps him firmly in the friend zone.

Whatever life throws their way, Alex and Drew remain best friends with their own traditions. Drew is Alex's family, her rock, and Alex keeps Drew grounded, always challenging him to better himself.

When years of buried feelings rush to the surface, they threaten to change everything...

Drew promised his mother he'd tell Alex how he feels, when the time is right - but how will he know when that is? Alex is terrified to reveal those 'three little words' certain Drew doesn't feel the same, and she'll lose the only family she has.

Should Alex and Drew open their hearts, and risk being crushed? Should they be satisfied with a deep, lifelong friendship? Or does the only chance for happiness lie... 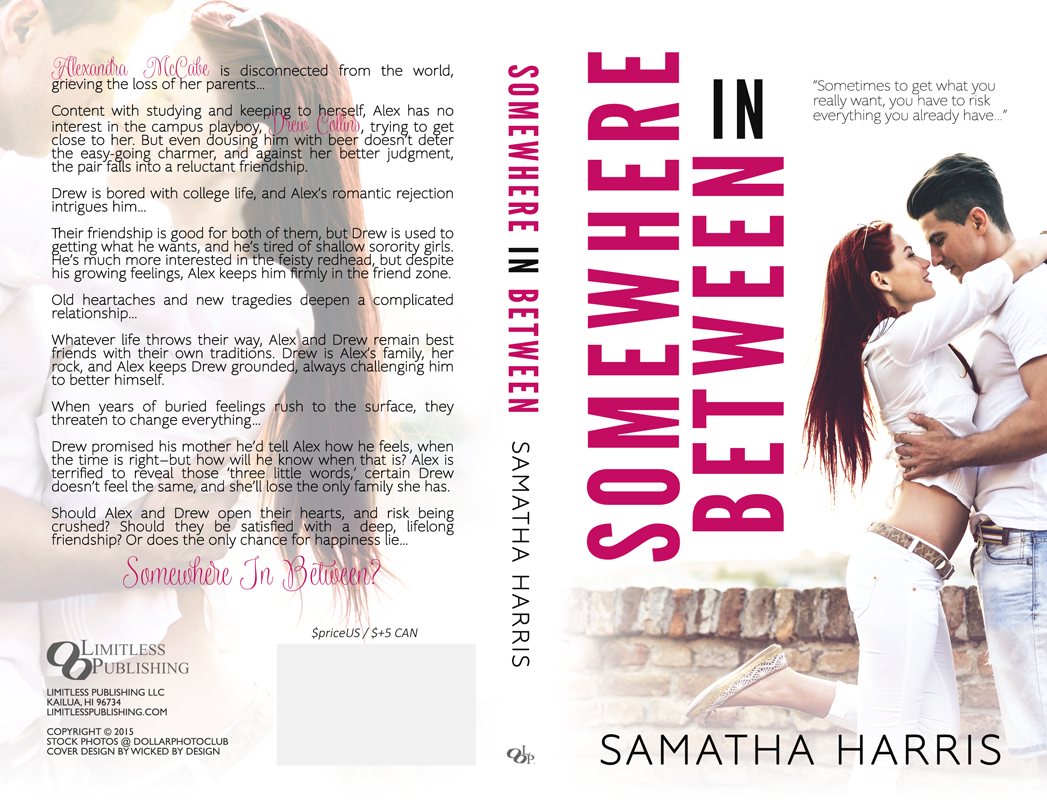 1. What is your favorite word?
Manwhore. It sounds fun.

2. What is your least favorite word?
Pickle. People use it in weird ways, like describing an uncomfortable situation or as an alternative to penis. A pickle is a pickle people. You eat it. Let's leave it at that. Plus the smell is rank.

3. What turn you on creatively, spiritually, or emotionally?
Determination.

4. Whatrns you off?
Timidity. Don't hide. Be who you are and own it.

5. What is your favorite curse word?
Son of a bitch. It just works in so many situations

6. What sound or noise do you love?
My nephew's laugh. He is the coolest kid ever.

7. What sound or noise do you hate?
The slow beep of a heart monitor.

8. What profession other than your own would you like to attempt?
Marriage counselor. Maybe, I can help other people from making the mistake I did.

9. What profession would you not like to do?
High school Teacher. Teenagers are assholes. God knows I was.

10. If Heaven exists, what would you like to hear God say when you arrive at the Pearly Gates?
Liquor in the front poker in the back.

Grab your copy of Somewhere in Between for more from my smartass leading man.

Well Hello Gorgeous. In my debut novel SOMEWHERE IN BETWEEN Alexandra McCabe and Drew Collins are best friends who fall for each other at different times in their lives. In the book these unlikely friends have a movie night ritual which is kicked off by arguing over what they are going to watch. This got me thinking about similar arguments I've had with guy friends about what to watch. So I put together my top 10 list of movies/TV shows to watch with your guy friends. Here we go.

1. Friends with Benefits - starring Justin Timberlake and Mila Kunis
While maybe an obvious choice, Friends with benefits has a little bit of everything for everyone. Comedy, romance, and just the right amount of nudity to keep you and your guy friend intrigued.

2. Grandma's Boy - starring Allen Covert and Nick Swardson
This one is entirely based on your sense of humor. I personally think this is one of the funniest movies I have ever seen. M guy friends love it and quote it constantly. Besides it has a f$@*ing sweet car bed.

3. Scorpion - starring Elyes Gabel and Katherine McPhee
This TV series has it all. It's 60 min jam packed with wit, lots of action, and the constant will they won’t they saga between Walter and Paige.

4. Forgetting Sarah Marshall - starring Jason Segel, Kristen Bell, and Russell Brand
Hilarious movie, once you get past the awkward Jason Segel full frontal. If you are anything like me you and your guy friend will have a lot of fun trading disgusted looks as Jason Segel's penis takes full advantage of its 15 minute of fame.

5. Grease - starring John Travolta and Olivia Newton John
This is a musical guys can get behind. No Idea why. Maybe its, the ramma lamma lamma, or the shoo bop shoo wadda. Either way Grease is one musical enjoyed by all.

6. Grown Ups 2 - starring Adam Sandler, Kevin James, Chris Rock, and David Spade
I love this movie it is by far one of my favorites and a definitely knee slapper. It is chock full of hilarious antics guaranteed to make both you and your guy friends double over with laughter.

7. That Awkward Moment - starring Zac Efron, Michael B Jordan, and Miles Teller
This one leans more toward the guys, but it a great love story too. You get the rare glimpse into the mentality of the confirmed bachelor as he finds the love of his life, and I mean come on Zac Efron

8. Undateable - starring Chris D'Elia and Brent Morin
Best show ever! It's got romance, its got music, its got grown men talking like little bitty Italian mice! What more could too good buddies enjoy more than laughing hysterically as Justin gets slapped by random celebrities for insulting Ed Sheeran

9. Be Cool - starring John Travolta, Uma Thurman, and Dwayne "The Rock" Johnson.
A hidden gem. It's got music, true love and a gunman with a bad toupee. Not to mention the hilarious music video where The rock sings about you not being woman enough to take his man.

10. Gilmore Girls - Starring Lauren Graham and Alexis Bledel
So I know what you are thinking total chick series and this is where you are wrong. Your guy friends may give you a hard time at first, but Lorelei's wit mixed with Luke's grumpy charm. Will quickly win them over.

So there you have it folks- My recommendations for things to watch with your guy friends. Don't forget you pick up your copy of SOMEWHERE IN BETWEEN to read about the craziness that comes with falling in love with your best friend.

Samatha "Sam" Harris lives near Baltimore, Maryland with her husband David and daughter Ava. Born in Florida, she migrated north which most people agree was a little backwards. She has been an artist all of her life, a Tattoo Artist for more than ten years, and a storyteller since she was a kid.

Sam has a slightly unhealthy love for Frank Sinatra, classic movies, and Jazz and Blues music, but her first love will always be reading. From Romance, to Thrillers, to Historical Fiction and everything in between, she loves to become a part of the story. As a writer she tells the stories that she would want to read.

♡ Hottie of The Day ♡ Thomas Beaudoin