I've come undone. For years I thought the world looked at my family and saw perfection. I was a busy surgeon and my wife was devoted to our two boys. But her devotion crumbled as her alcoholism took over. The outside world saw all too well what I wanted to deny.

Ten months ago she filed for divorce, packed up and moved away. To where – I don't know. Nor do I care. But my boys do. And they're left with me, a man who never learned how to be the dad they deserve.

Just when I'm starting to pick up the pieces, my world is rocked again by the last woman I'd expect. Given her past with my family, she's a bad idea. But I'm drawn like a moth to a flame. I can't stay away, even though I know this, too, will eventually crumble around me.

Drawn Deeper is the third book in the Lockhart Brothers series by Brenda Rothert, but can be read as a standalone.

Almost a decade ago, Meredith Hobbs left Reed Lockart at the altar. After that, she became a pariah. She lives for her father and for her job.
A year ago, Kyle Lockhart's wife left him and their kids. A workaholic, he had to balance is job as a doctor and raising his kids alone.
A chance encounter brings Meredith and Kyle together. As she helps him by tutoring his children, Kyle develops feelings for Meredith. When he realizes that she feels the same way, they start dating each other.
But Kyle is afraid that Meredith will leave him like his ex-wife did. And Meredith doesn't believe she deserves a man as wonderful as Kyle and fears his family's reaction.
Will they find their happy ending?

I loved Drawn Deeper!
The story is amazing and I couldn't stop reading. It took me in a rollercoaster ride of emotions with its laughter, drama, and hot steamy scenes.
I love that Drawn Deeper has a dual POV and I could enter Kyle's and Meredith's minds.

Meredith Hobbs is a pariah in Lovely, even if it has passed almost a decade since she left Reed at the altar. She feels lonely, with no one to confide. She gave up her dream of becoming a teacher so she could help her father and work for him. In the beginning of the book, Meredith is an insecure and lonely woman. But throughout the book, she changes a lot. I loved seeing her grow!
Kyle Lockhart is now a single father of two boys. He used to be an workaholic and didn't notice that his marriage and his wife were falling apart, until his wife left him. He is a very sweet and kind guy that made me swoon a lot. But when he let his alpha side come out? Oh my god! He had me drooling. So hot! He is perfect!

Brenda Rothert gives us a fantastic book, flawlessly written, making it easy to connect with the incredible story and the great characters she created.
Can't wait to read more about the Lockhart brothers! 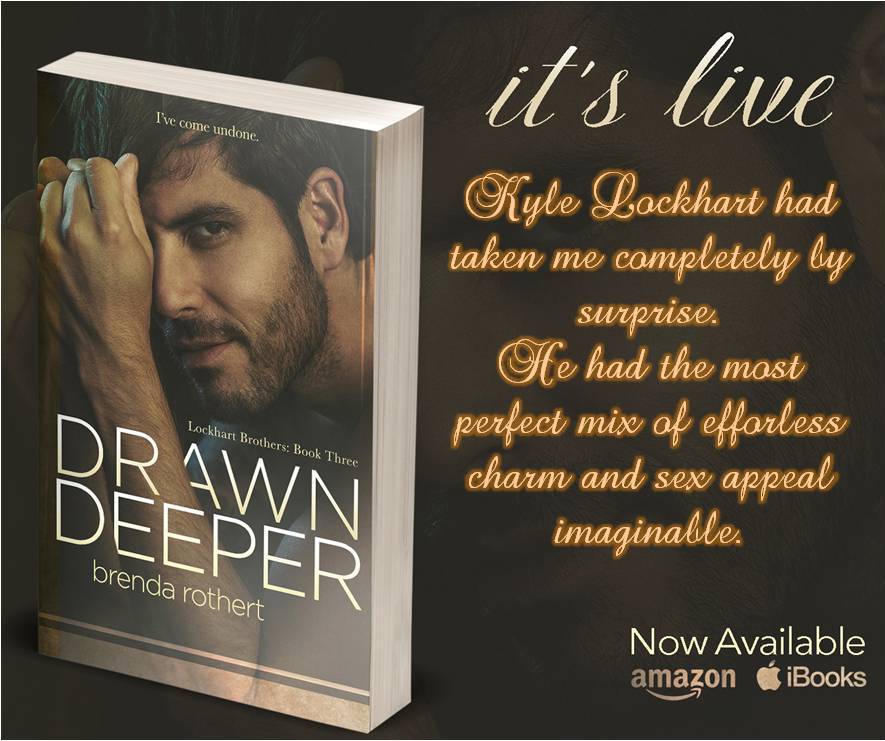