THE ROCK FALLS SERIES IS BACK!!
The 5th installment, SAVING STEELE, is now available for purchase! Kennedy Cross had her heart broken early in life. It wasn't someone or something who betrayed her — it was her own body. Despite it being all she's ever wanted, Kennedy will never know what it feels like to feel her baby's feet kick from the inside out. Having been pronounced infertile at only eighteen, she redirected her life the best way she could.

Eight years and a degree later, Kennedy is one of the most well-loved first-grade teachers at Rock Falls Elementary School. It doesn't matter that her college boyfriend left her because he wanted children of his own. She has twenty-two of the most gorgeous six-year-olds who adore her and she wouldn't have it any other way.

Jackson Steele deals only in extremes. He falls victim to manic episodes lasting for days, sometimes weeks at a time, sending him reeling from volatile highs to devastating lows. It's a living hell just being inside his own mind, and that hell has taken everything he's ever loved away from him. But what if, this time, it gives him something? An untimely gift from God and a brunette with legs eight miles long will bring him the most unforeseen joy but also his most challenging of tests. 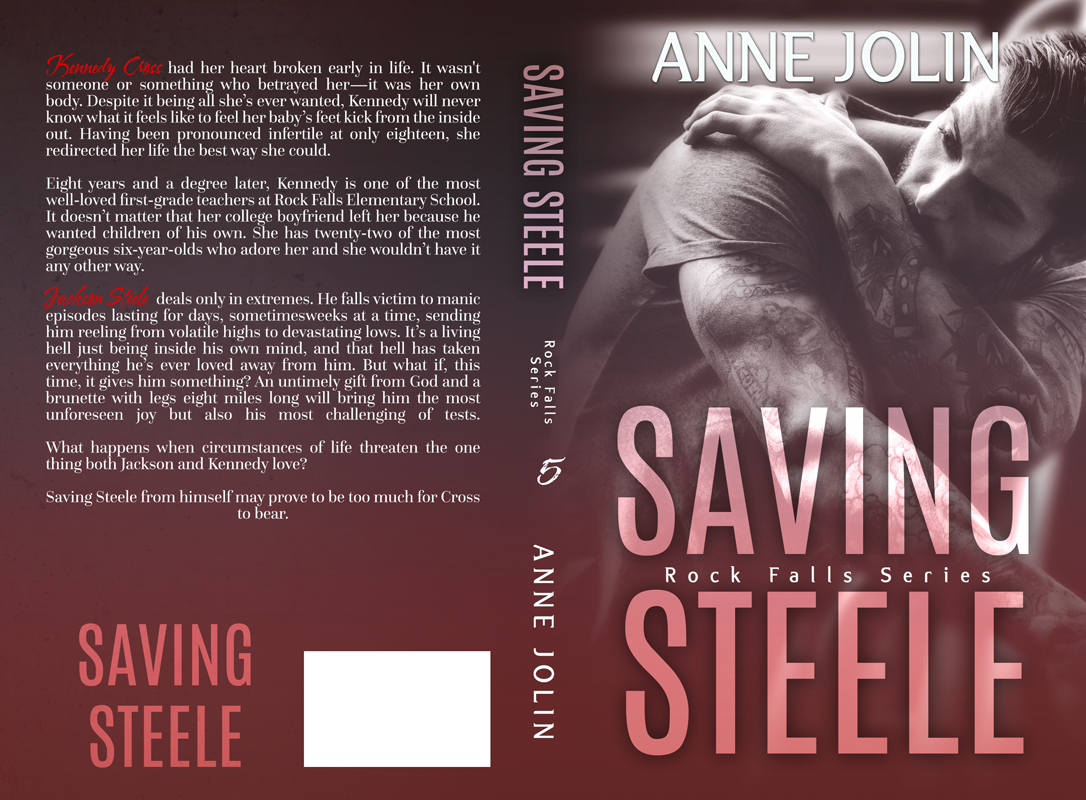 So that brings me to now, turning off my ignition and willing my body to move from the safety of my driver's seat and up to his front door.

It's okay though. I've come prepared. I'd written a list of things not to do when I arrived at the house on a yellow Post-it note.

1. Don't hyperventilate
2. Don't sweat
3. Don't touch him
4. Don't say the word "penis" or any of its synonyms or any parts of the male anatomy in general
5. Don't drool

Putting force behind the fist I'd raised to knock on the door I immediately begin to fall forward as the offending panel of wood swings inward and I face plant directly into a hard male chest.

Rats! There goes rule number three and quickly too.

Mmm. But he sure smells nice.

"Easy, babe," his voice is a deep manly chuckle, large hands settling on my waist.

I feel that "babe", that chuckle and that contact in all the right places, even a tingle or two in some wrong ones if I'm being honest.

Considering I'm relatively close to the brink of insanity this morning, it isn't all that surprising that in that second, instead of pulling away, I take the opportunity to tilt my head back and look at him, really look at him, for the second time since we'd met.

Should have added a sixth rule. Don't look at him either. Hannah Rhodes has just gotten out of a long term relationship, and she isn't looking for a new man in her life. But after a night out with the girls and one too many tequila shots, her plans to stay man free are blown all to hell. She finds herself in bed with the smoldering stranger from a party six months back and immediately knows she's in trouble, big trouble. And the last thing Hannah needs is more trouble.

Her last relationship took her out like an emotional freight train, and she's trying to piece back the stability her life once had.

Greyson Holt's biggest fear in life is to end up like his father, like the man who left him as a child, and broke his mother's heart. He vowed to never be responsible for that kind of carnage. Men could be cruel and that kind of brutality was in his blood. He never allows himself to get too close to anyone, until he meets Hannah.

Something about her makes him want to try, but a man can't change overnight.

Will Holt be able to catch Rhodes every time he lets her go? Or will their chase end in heartbreak? 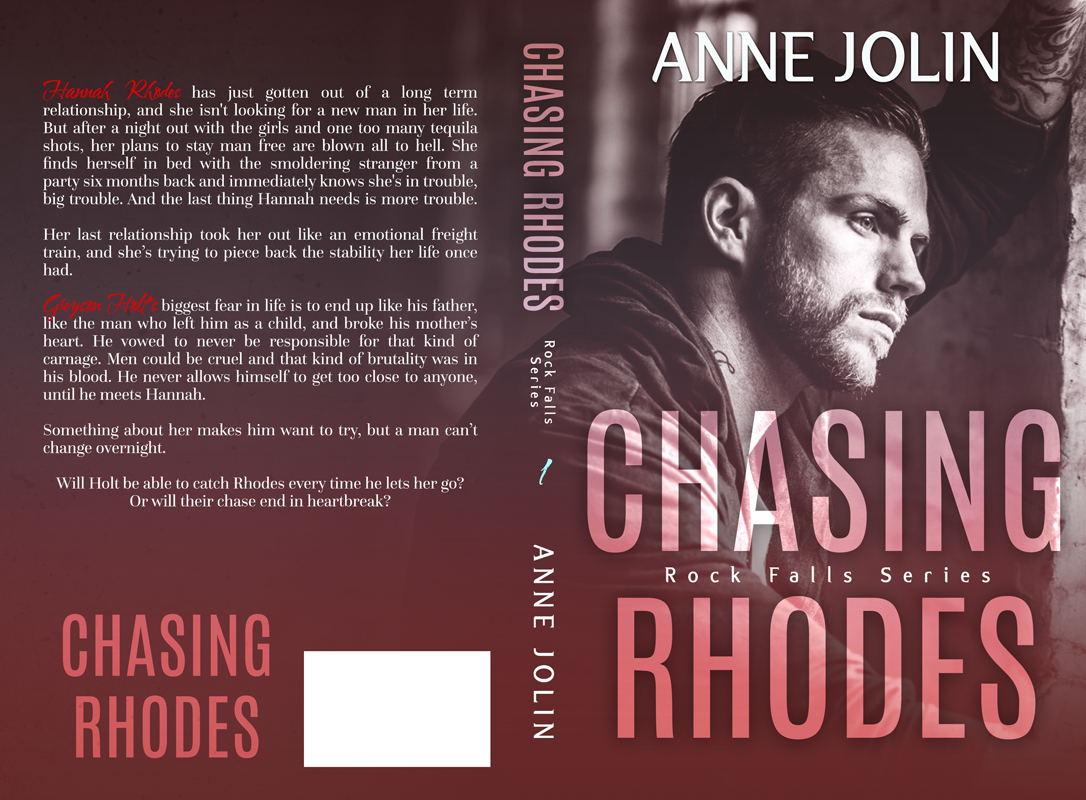 When the floor fell out from underneath her perfect childhood, it shattered her ability to trust. The one man in her life who was genetically programmed to love her left her. Since then, she's allowed men into her bed and even into her life, but never into her heart.

Jamison Henley has never wanted a woman for longer than it takes him to make a guitar. He's content living his life and loving only three things: making guitars, cooking great food, and Martha, his black pit bull. He never chases women, and he's never had to.

One night together changes everything. There's no going back to the way it was before.

She doesn't want to want him, but she does.

He knows he wants her, but he can't have her.

Will Montgomery take the leap of faith in choosing Henley? Or will her fear cripple their chance at a happily ever after? 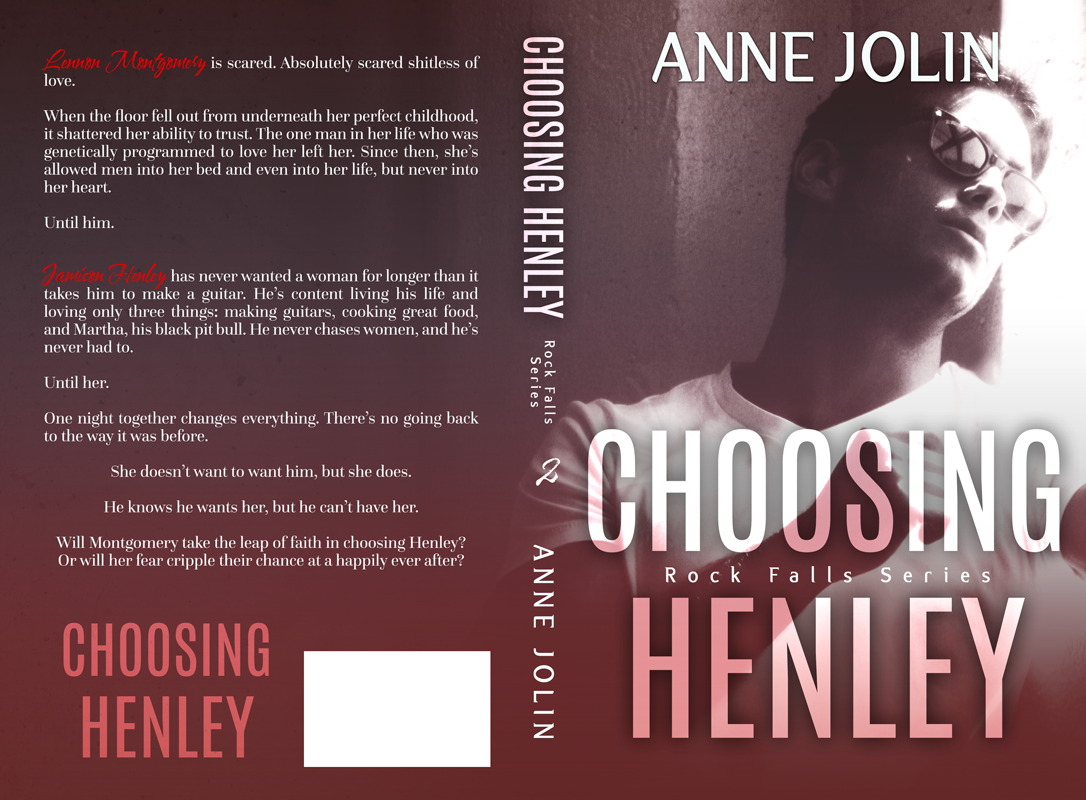 Beth Rhodes has always had a game plan. Go to college. Get the perfect job. Get the perfect guy. Get the happily ever after she's always wanted. It is just her luck that everything falls into its precise place in her life. At least it seems that way until her blueprints go up in smoke. She loses the job she loves and her prince charming is turning out to be the villain of her fairytale instead. With failures and mistakes piling up on her doorstep, she knows something has to give — or she could very well end up paying for those mistakes with her life.

Braxton Bennett is lethal, both in the courtroom and in the ring. Two sides of him constantly wage war against one another, and to keep the internal bloodshed at bay, he allows himself to indulge in his violent vice. Suit by day and brawler by night aren't easy dual lives to manage for a man of his status. The only way to do so is by following a strict set of rules — rules he won't break for anyone. But what if he already has?

On a summer night in the depths of the city, a chance encounter will turn both of their perfectly constructed worlds upside down.

Will they battle together against all odds to break Bennett’s rules? Or will Rhodes tap out to save herself before the fight is over? 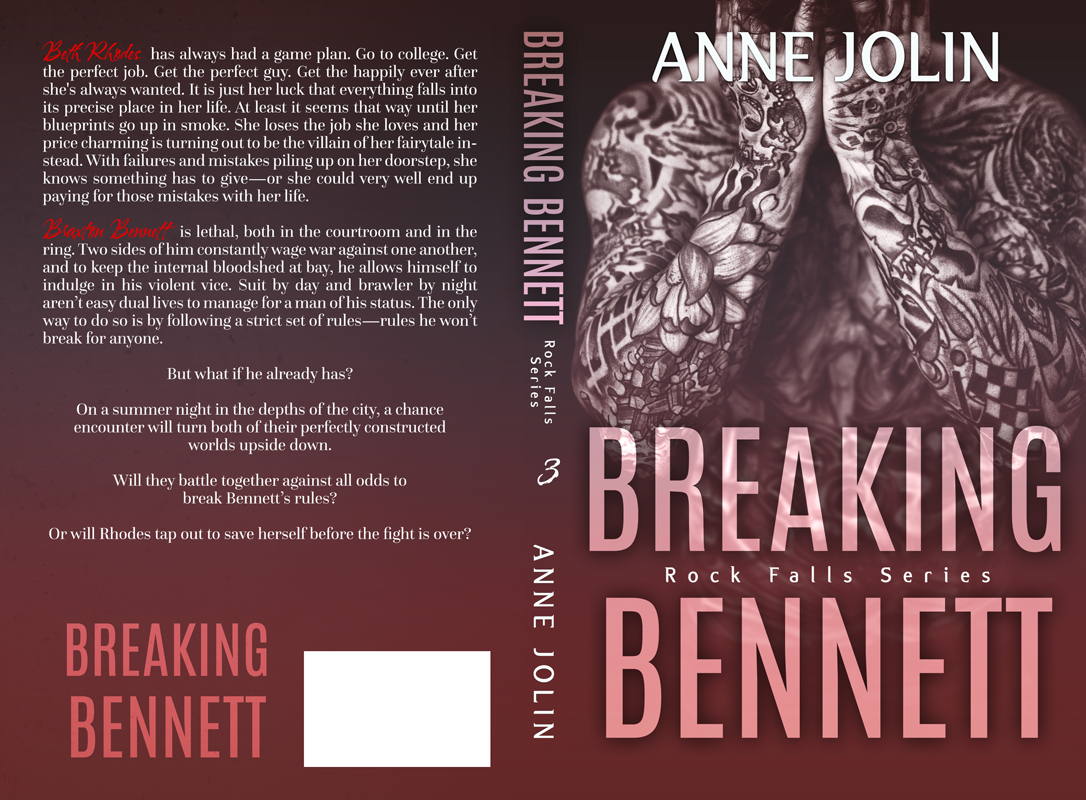 Peyton Callaghan is a fighter, a survivor, a warrior. When it was kill or be killed, she didn't hesitate. Now, she's the only one left standing, haunted by the ghost of a dead man and plagued with the guilt of having taken another person's life. The upheaval of her life to start over in Rock Falls has been rocky at best, her worst nightmares and wildest desires colliding with each other. Terror tortures her nightly, breeding fear inside her dreams, and in every waking moment, she fights against the lust that threatens to drown her.

Jayden King harbors secrets beneath his outward playboy demeanor. The women who warm his bed lay claim to nothing — you can't lay claim to someone who doesn't have a heart. His wit and charm are exquisite means of deflection and distraction from the turmoil roaring inside him. He's hidden in plain sight, a mask of humor keeping the sadness at bay. The only real reflections of his soul are in the artwork he creates, pieces of him muraled on the skin of others. If tattoo artists could have a calling card, the etch of pain and suffering in each design would be his. Because when the lights go out and the women he's satisfied have gone home, he's alone with every fear he refuses to face.

After suffering from a brutal attack at the hands of her roommate's stalker, Peyton is forced to live with the object of her affection. Without intention, she breathes love into his starved heart, and although the mere thought of that terrifies him, Jayden would burn the city down to keep her safe, causalities be damned.

She can have him. She can hold him. But can she keep King? Or is it impossible for Callaghan to keep something that was never really hers to begin with? 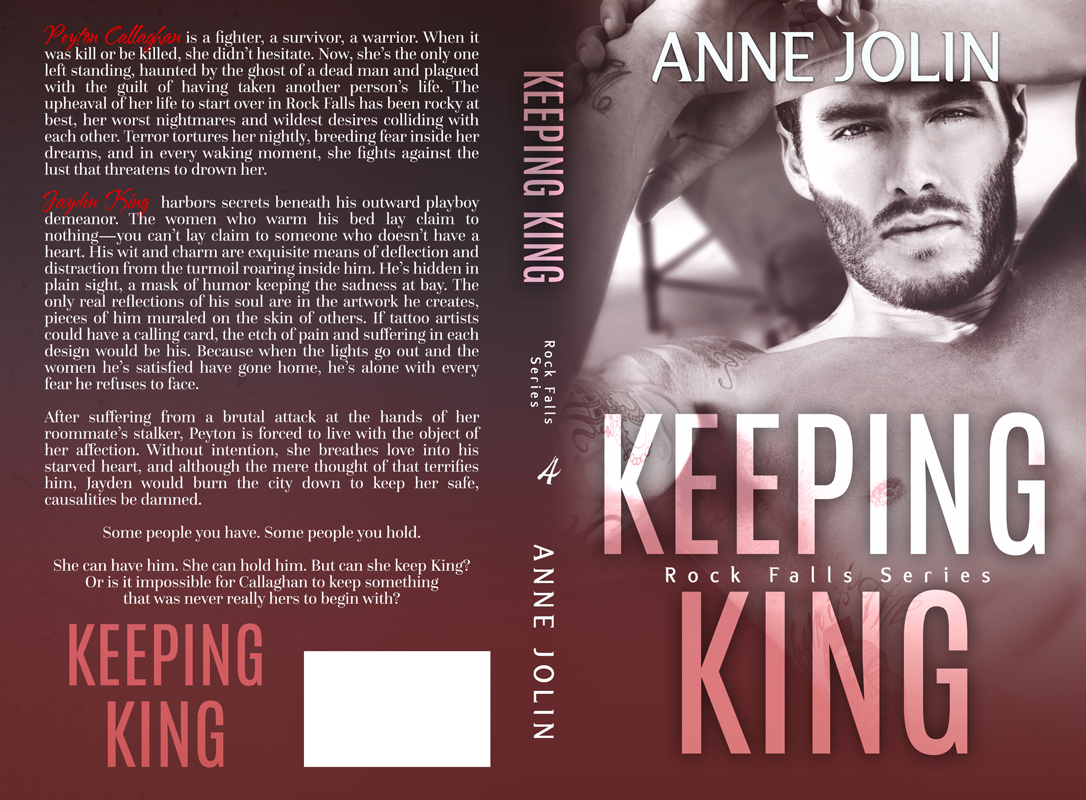 I was born and raised in Ladner, a small farm town just outside Vancouver, Canada. I grew up riding horses, shooting guns, and driving in trucks.

I never expected to be an author. A massage therapist? Yes. Take over the family construction company? Yes. But an author? No. Writing was something that snuck up on me and rooted itself into my life. It was beautiful to discover that love, and I'm truly grateful to say I've found my passion.

Since I've always been a creative person, it feels amazing to harness all of that energy and use it to tell a story I love. I enjoy incorporating bits of my real life into the stories I write. What parts are true? Hah. I'll never tell — what would be the fun in that?

If I could leave y'all with one thing, it's that life's far too short to not live it out loud. Drown in your passions, hold on tight to the things that inspire you, and chase your dreams relentlessly. I can promise you without a doubt that you won't regret it. I know I don't.

♡ Hottie of The Day ♡ Joshua Steigerwald