When I Lied
by
Michelle Kemper Brownlow 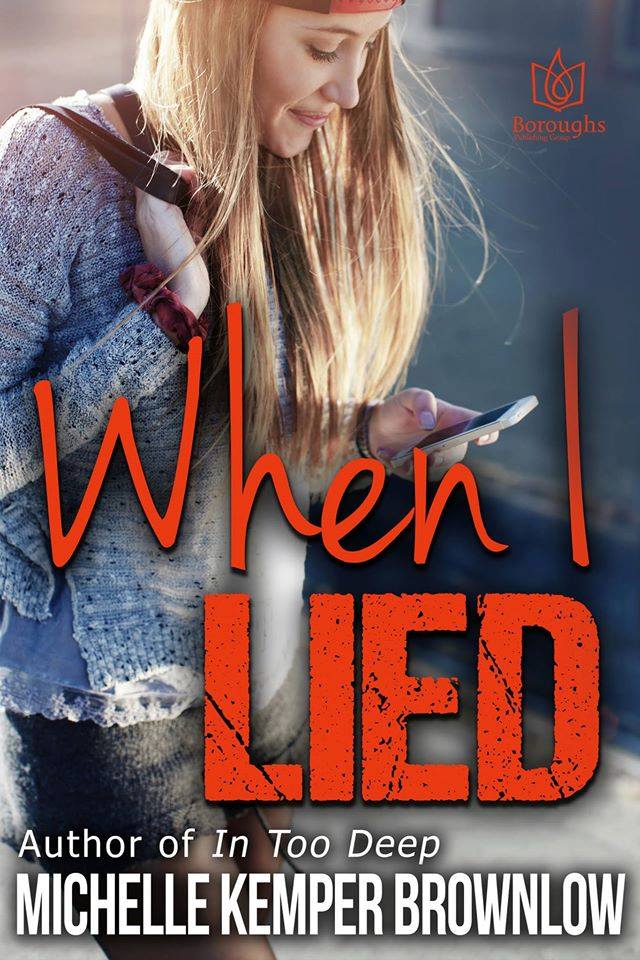 When Kate created her sexy online persona, "Lexi", she never expected the lies to spin so far out of control. But now one of the biggest rock stars in the world, the brilliant but damaged Oliver Walt, is in love with her, and revealing the truth means not only breaking her own heart but sending the musician into a tailspin from which he might never recover.

Lexi is just the sort of girl a dark and brooding rockstar like Oliver Walt would fall for. Beautiful. Wild. Fun. The only problem?


LEXI IS A LIE

Bookish Kate Green knew she needed to brush up on her social skills before her first year of college, so she created an online persona to chat and flirt. And who better to practice on than talented and tormented rock frontman Oliver Walt? After all, the lead singer of her favorite band would hardly notice one more adoring fan. Except... he does. And with a single private message, Kate's world changes forever.

Then Oliver wants to meet in person. Kate knows she has to come clean, but things are never that easy, so instead she enlists the aid of her beautiful and calculating study partner... which turns out just the way you might expect. Now, with Gretchen refusing to stop being Lexi, the lies grow bigger by the hour — and so do the stakes. Kate's heart and Oliver's life. 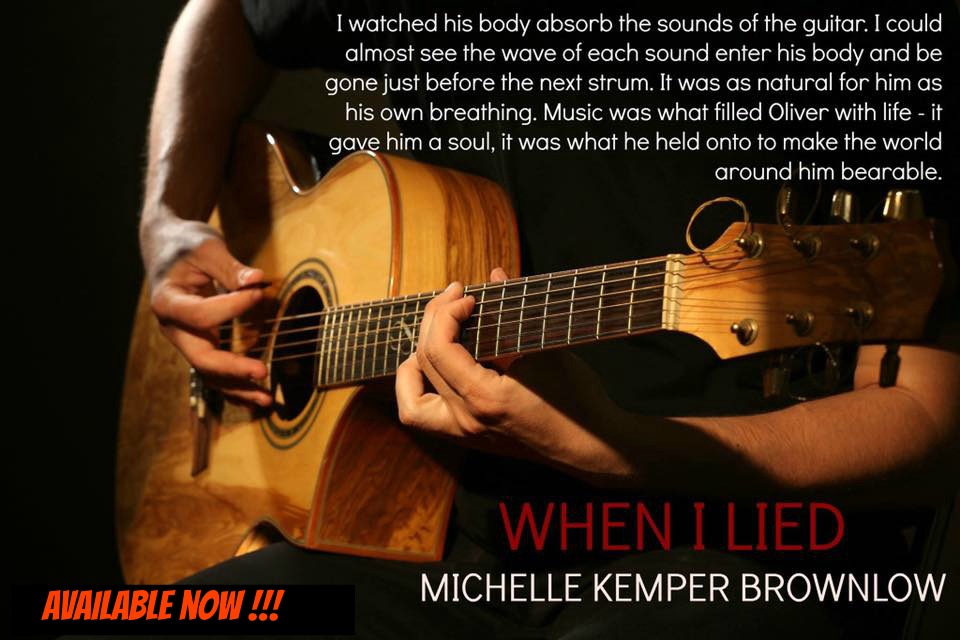 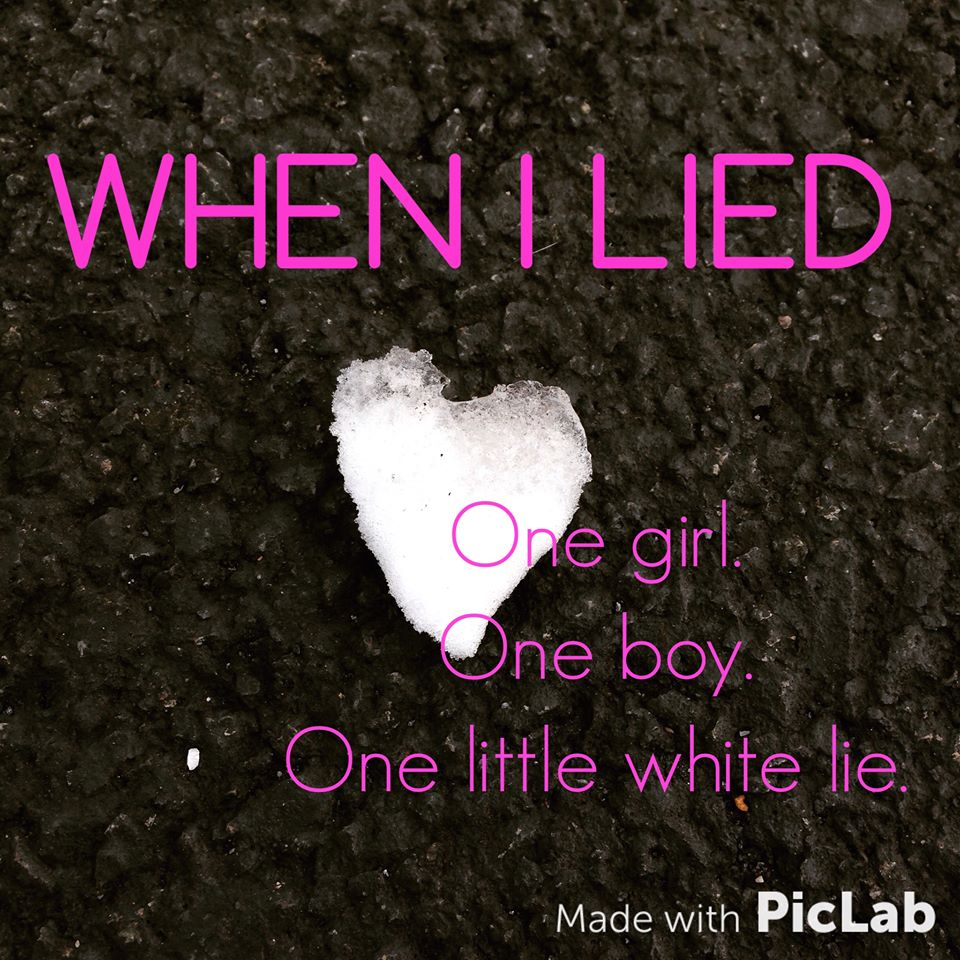 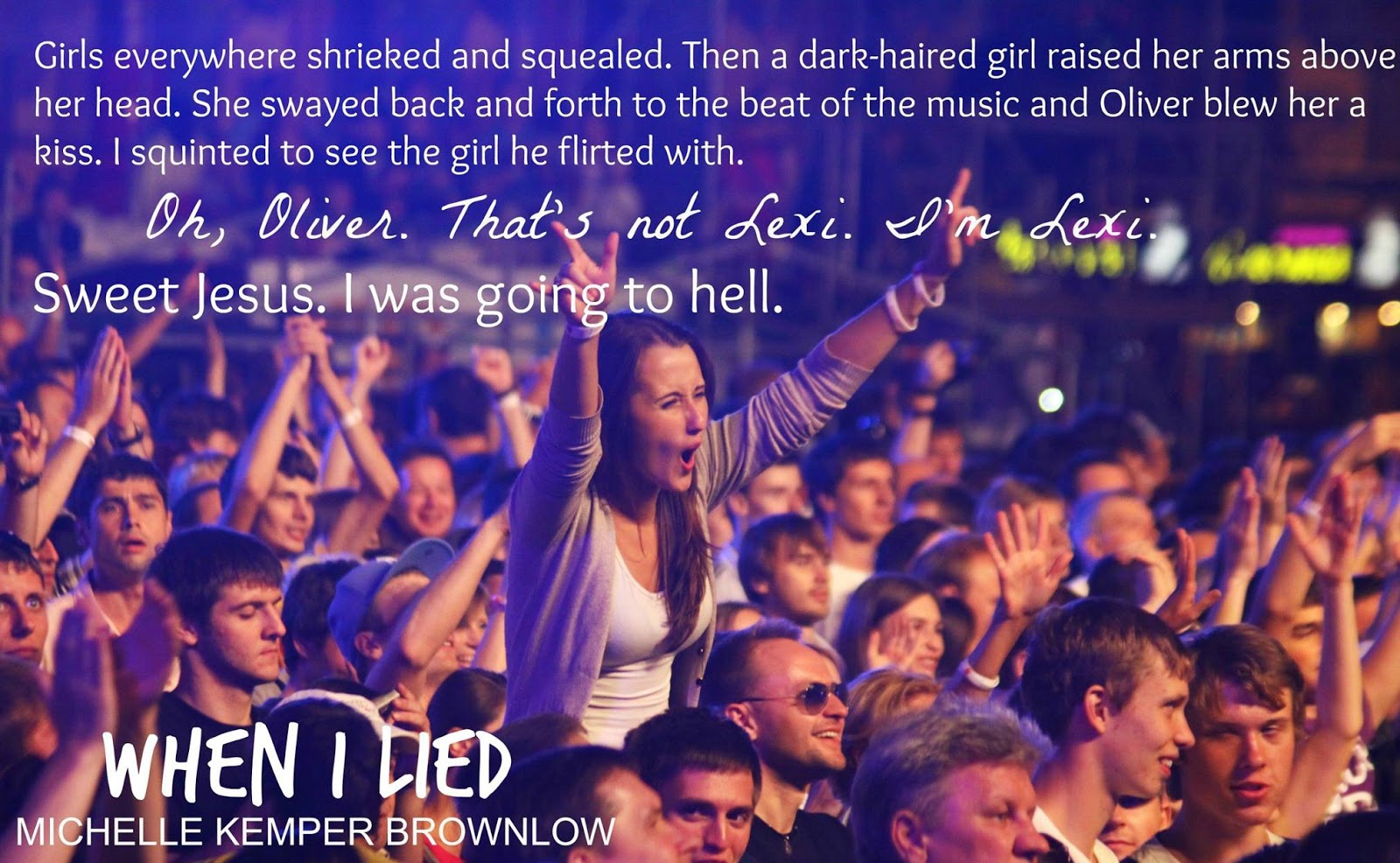 "Oliver, I don't know if it's my place to say anything..." I stammered a little as I tried to find the right words.

"It's okay, Kate. You can say anything to me. What is it? What's bothering you?" He tilted his head like he always did. It melted me each time he did it.

"Oliver, just know that you have blessed my heart and my soul with who you are and the words you bring to life. Be careful not to cut your time short inspiring the world with your genius, too." I didn't know what else to say and worried I'd said too much. Tears pricked behind my eyes, still being held back from earlier in the evening.

"Kate! Why are you crying?" Oliver's other hand lifted to my other cheek and he held my face close to his.

"Oliver, there's something I have to tell you." Tears streamed from the corners of my eyes. The time had come. It needed to be done. It would break him but hopefully he could heal knowing I'd voluntarily set him free from the lie I'd created.

The limo's horn blared and we both jumped. I sucked in a deep breath and wiped my face. Oliver's hands gripped my bare arms.

"Come ON! Say good night already!" Gretchen's voice had become like nails on a chalkboard and I'd have gotten great pleasure in ripping her throat wide open so I'd never have to hear it again.

"Lexi, you're being rude. Please give us a moment." Oliver actually rolled his eyes then turned back to me. I knew I didn't have enough time to unleash the backstory of my lie before Gretchen would catapult herself from the limo and drag Oliver back inside.

"It's okay. I'm sorry, Oliver. I get weepy when I drink too much. It's nothing. Go ahead. I don't want you to have to deal with Lexi being pissed off for the rest of your evening."

"You sure you're okay?" He placed his hands on my bare neck and goose bumps rose across every square inch of me.

"Promise, I'm fine. Champagne makes me really intense." I winked and turned and slid my ID through the security lock. The door clicked and I pulled it open. I wanted him to walk inside with me and not leave until morning. 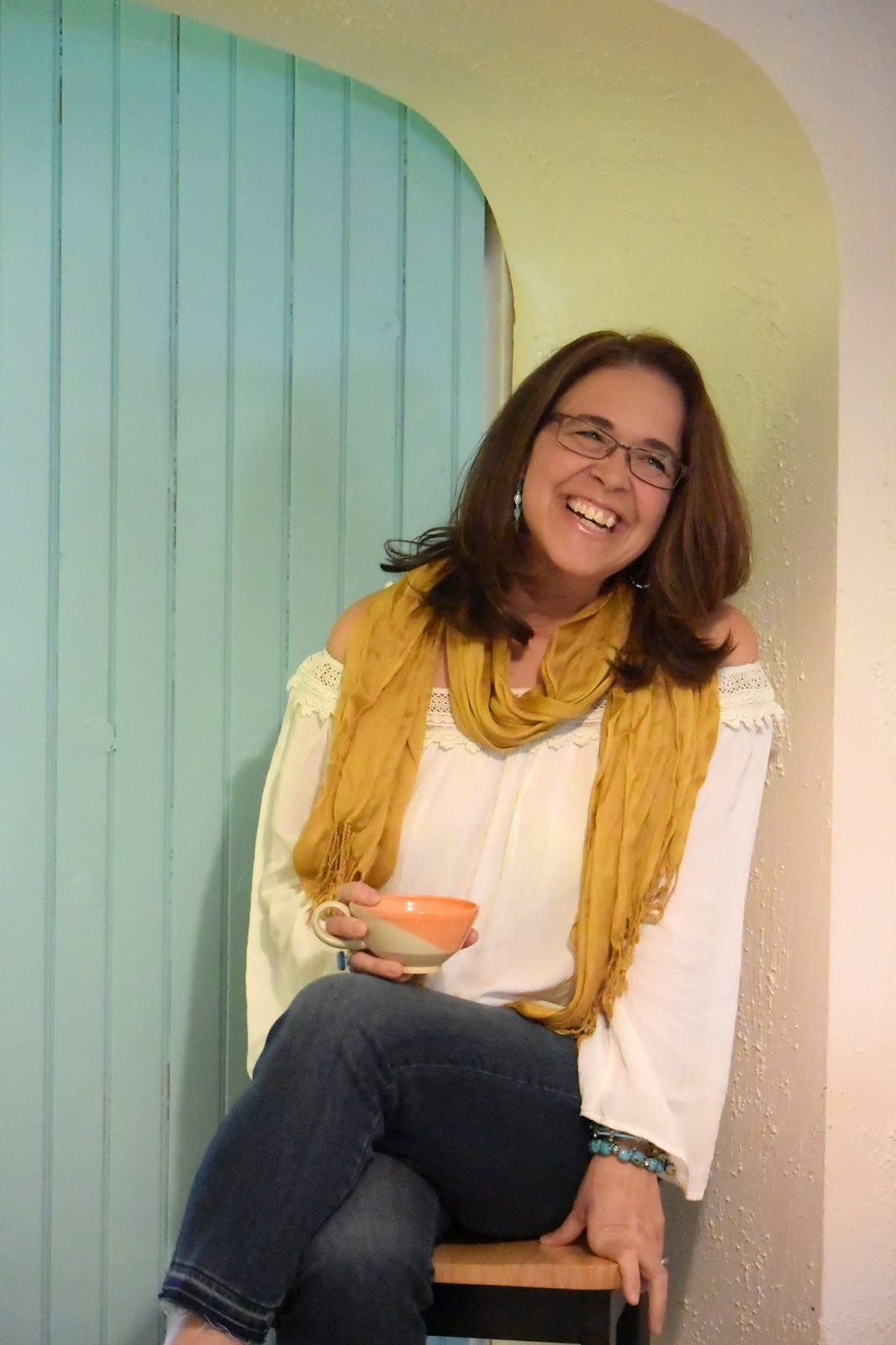 Michelle Kemper Brownlow likes her music loud and prefers live concerts but will happily settle for the eclectic playlists on her iPhone. This Penn State grad and former high school art teacher is easily distracted by colorful art supplies and Eddie Vedder's voice. When she's not in her studio writing, she can be found putting off housework for a good romance novel that has her heart pounding and tears flowing. She is married to her college sweetheart and is mom to three fantastic humans, a black lab, a tabby cat and a Chinchilla named Wodney.

East of Redemption
Love on the Edge #2
by
Molly E. Lee

Easton Wells has spent years burying his guilt by digging up some of the world's most renowned treasures while surviving the dangerous terrains in which they're located — all captured for television. When his producers threaten to axe the show, he has no choice but to turn to the last person he still trusts — the girl he left behind.

Rain Walker has made a name for herself documenting wild and endangered animals, and the last voice she expects to hear while shooting in South Africa is Easton's. He's more gorgeous than she remembers, but the pain in her heart is as fresh as ever. They'd once planned on spending the rest of their lives together, but after her father's tragic death while on expedition in Israel with him, Easton bailed on their future together without an explanation. It's been nine years, and yet the intense love they shared seems only a moment ago.

When he asks her to film his latest treasure hunt, Rain wants to turn him down instantly. But when he explains it's to the same cave that swallowed her father, she can't say no. She wants to experience the last place her father was alive, and she's beyond curious about what happened to the boy she used to love.

They've got two weeks to locate a treasure that's been lost for centuries, or Easton will lose the one thing in his life he's come to depend on. As their old passion is reignited — and dark secrets uncovered — they face the extreme terrain of the mountain range that threatens them at every turn. As more than the wildlife and sharp drop-offs tries to kill them, Rain starts to question if the legendary treasure they seek — the same one her father had died trying to unearth — is truly meant to be found, or if some things, including their feelings for each other, are better left buried. Edge of Chaos
Love on the Edge #1
by
Molly E. Lee

Blake Caster has been in an emotionally abusive relationship with Justin for so long, she can't tell what is normal anymore, and so she clings to the one thing that is solidly hers — her passion for extreme weather.

Three years into her Meteorology degree, Blake meets professional storm chaser, Dash Lexington, who is as gorgeous as he is daring. Instantly recognizing her passion and skills in analyzing weather data, he makes a spot for her on his tight-knit storm chasing team. Dash and Blake form a fast friendship and it forces her to realize just how toxic her relationship with Justin is. She can't deny the lightning-worthy chemistry she has with Dash or how her heart stalls every time he gets too close to a tornado.

With each chase and the cherished moments with Dash, Blake discovers her own self-worth and gains the strength to end things with Justin for good. But he won't go easily. As Blake tries to sever ties with one man, she fears she'll lose the other to his dangerous obsession — and she doesn't know if she'll be enough to save him from the impending storm that could end them all.

Molly Lee is an author, editor, and mentor best known from Pitch Wars, a program that connects promising writers to established authors in the community. She writes NA contemporary and YA urban fantasy with strong heroines who are unafraid to challenge their male counterparts, yet still vulnerable enough to have love sneak up on them. Throw in high-octane action or any kind of supernatural element and she'll be hooked. A military spouse with two children and one stubborn english bulldog, Molly enjoys watching storms from the back porch of her Midwest home and digging for treasures at local antique shops.

♡ Hottie of The Day ♡ Joseph Weir