In places where the sun can hide, the darkest betrayals are made.

Violet Gallucci and Kazimir Markovic have grown up in the same city, but on opposite sides of the game they call life — Violet, an Italian principessa della mafia, and Kaz, a Russian Bratva heir. Lines have been drawn, and they know not to cross them.

Their paths crossed once, a long time ago, but when they meet again, the territory and rules set out by their families that have kept them separated seem to bleed away.

She's more than her last name...

He's more than a Russian...

But secrets from the past — and the people determined to keep them hidden — have other plans for Violet and Kaz.

They should be enemies.

It could mean war.

This is just the beginning...

From authors Bethany-Kris (The Chicago War) and London Miller (Volkov Bratva) comes a thrilling, sexy new series — Seasons of Betrayal. Where the Russians and Italians clash in culture, mafia... and love. 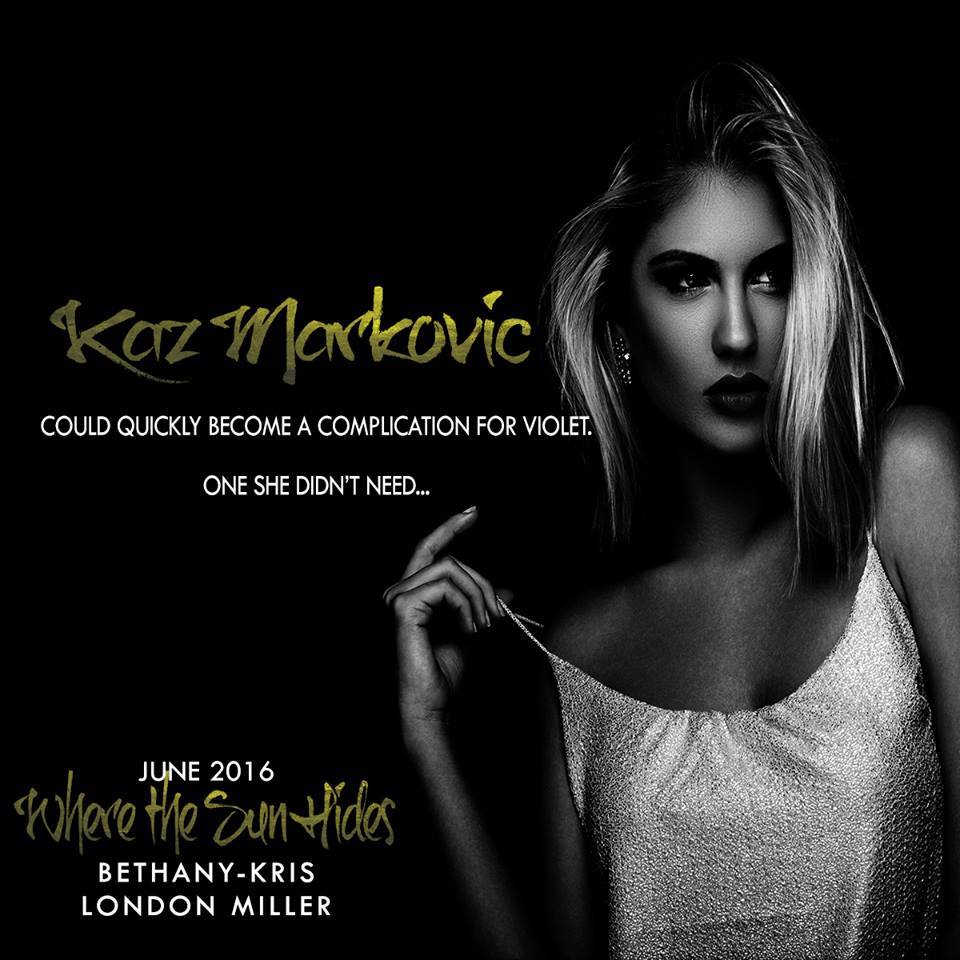 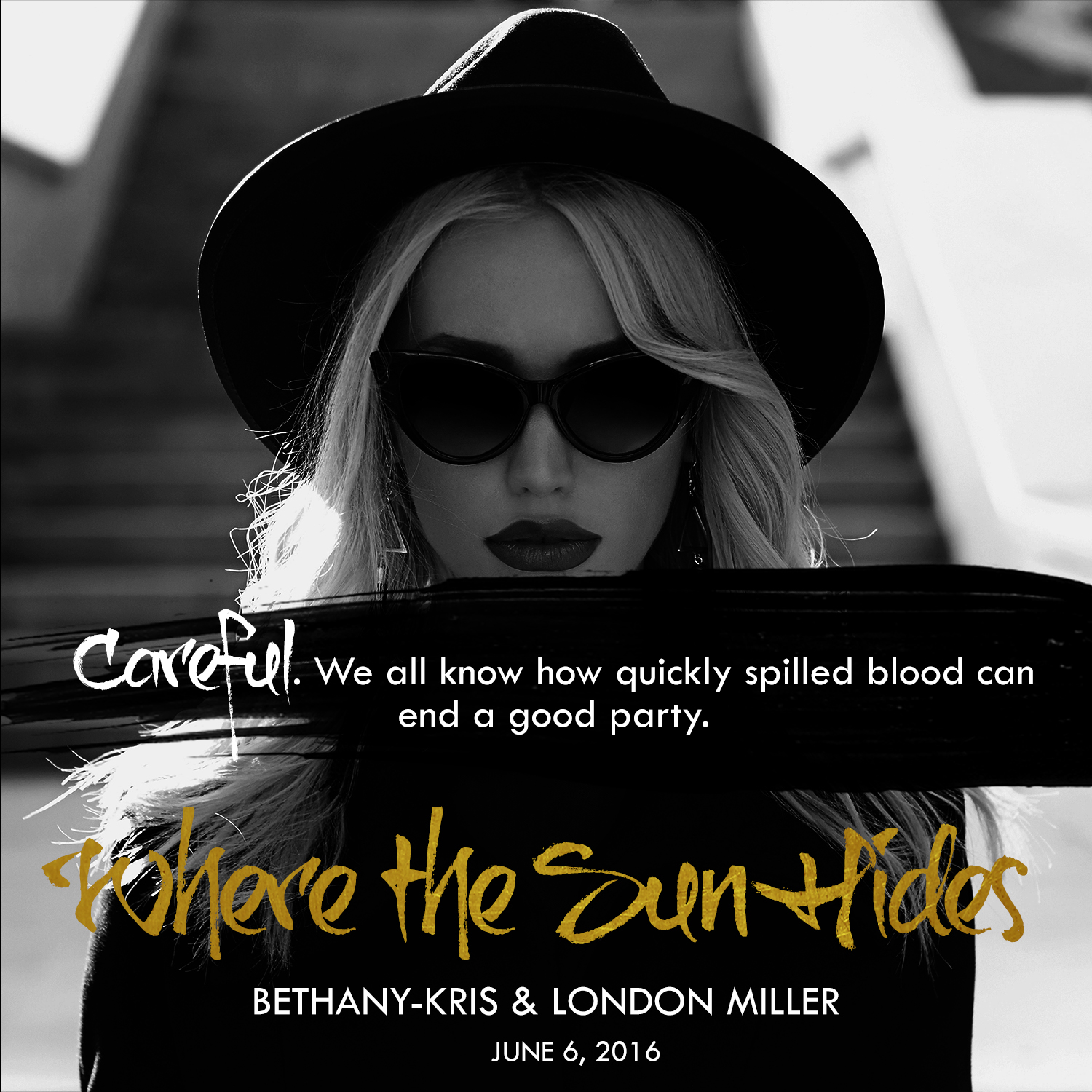 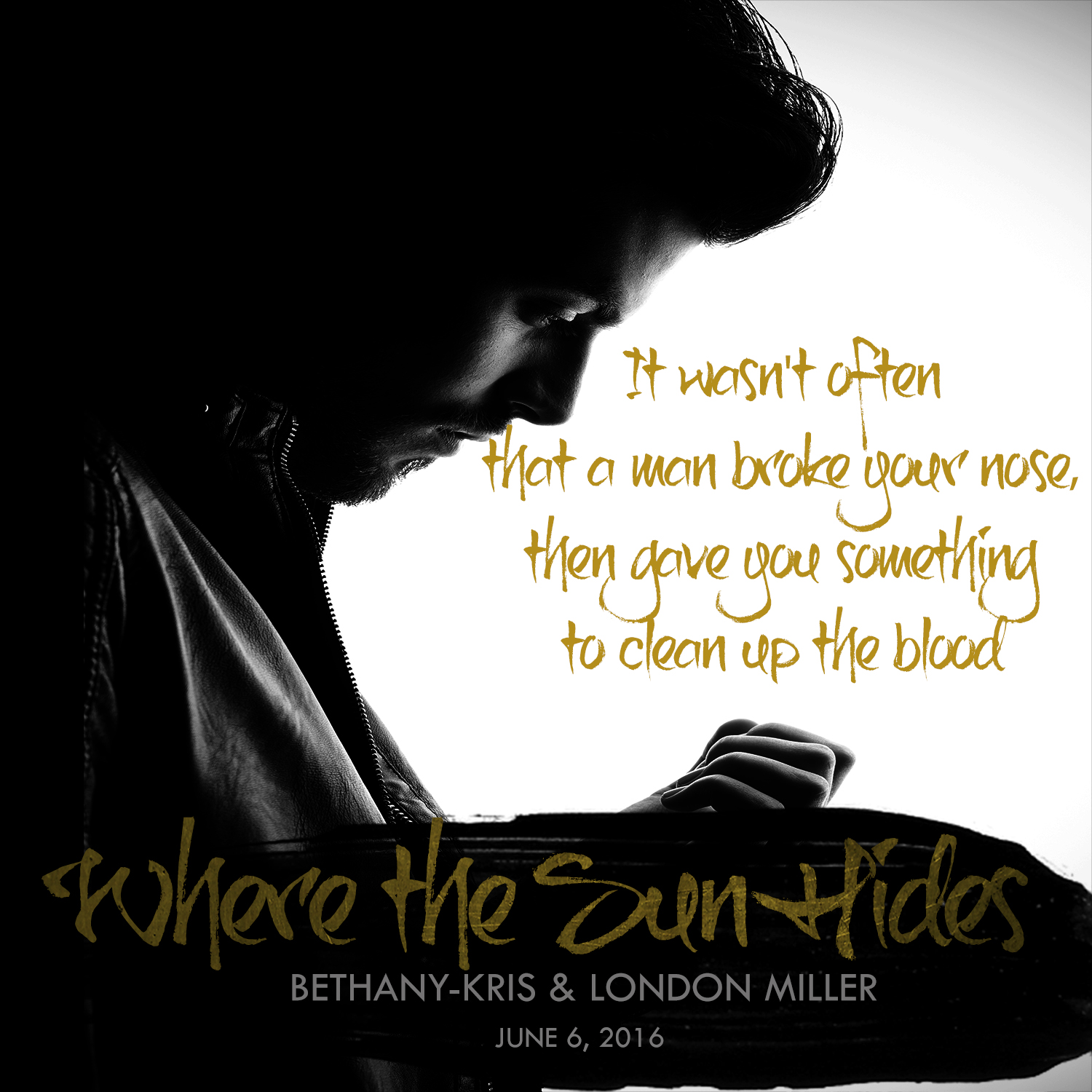 He didn't know her.

He knew nothing about her.

And his words ached.

Reaction from pure fury alone was the only excuse Violet had for her next actions. With her hand free, he had left himself exposed. Before she could properly think over what she was doing, she smacked his hand out of her face with a huff.

Kaz dropped her other hand, surprised.

She was raising it just as fast.

When it cracked across his cheek, the sound reverberated in the condo.

Nothing else made a noise.

He didn't even breathe as he took a single step back, his thumb stroking his jaw as his stare focused in on her again.

She didn't move an inch.

Violet knew better than to hit a man when he was in a rage. A normal man would walk away, but a man prone to violence might not.

She opened her mouth to speak — not to apologize, but to tell him to leave — but she didn't get the chance to say a thing. Kaz was on her before she had even blinked.

His hands were at the top of her throat, forcing her head up as he crowded her to the wall again. Violet's eyes widened, her heart racing as she felt his long fingers tighten just enough to scare her.

Violet tensed as his hands began to move down her throat with a slowness that made her shudder. Maybe it was the roughness of his skin, or the heat of his palms dragging down the column of her neck, but his touch didn't quite feel threatening like it first had.

She sucked in a deep breath when his thumbs rested against the hollow of her throat. He didn't press to cut off her windpipe, but rather, just let his thumbs rest there like they could hurt her with her next blink.

Kaz's gray stare never wavered from hers. "It's easier for me to believe otherwise."

"That's something you'll have to deal with, I guess."

Her words were bravado, and very little else. It was getting more difficult by the second to ignore the shake in her hands or the pulsing ache between her thighs.

This was not good at all.

"This could be so easy," Kaz said, still watching her in that way of his. "Just a little press of my fingers right here, and then what you did is answered for."

His lips parted to speak again, but he hesitated.

"I didn't," she repeated. "And you won't hurt me for not doing anything at all."

Kaz's mouth curled at the corners, and he flashed his white teeth in a mix between a sneer and a grimace. She felt his fingers tighten to her throat and his thumbs press against the hollow just enough to make her stand a little straighter, freeze under his hands, and wait.

She didn't have to wait for long, but his next move was not what she was expecting.

Violet blinked and Kaz's mouth was crushing down on hers rough, hard, and demanding. 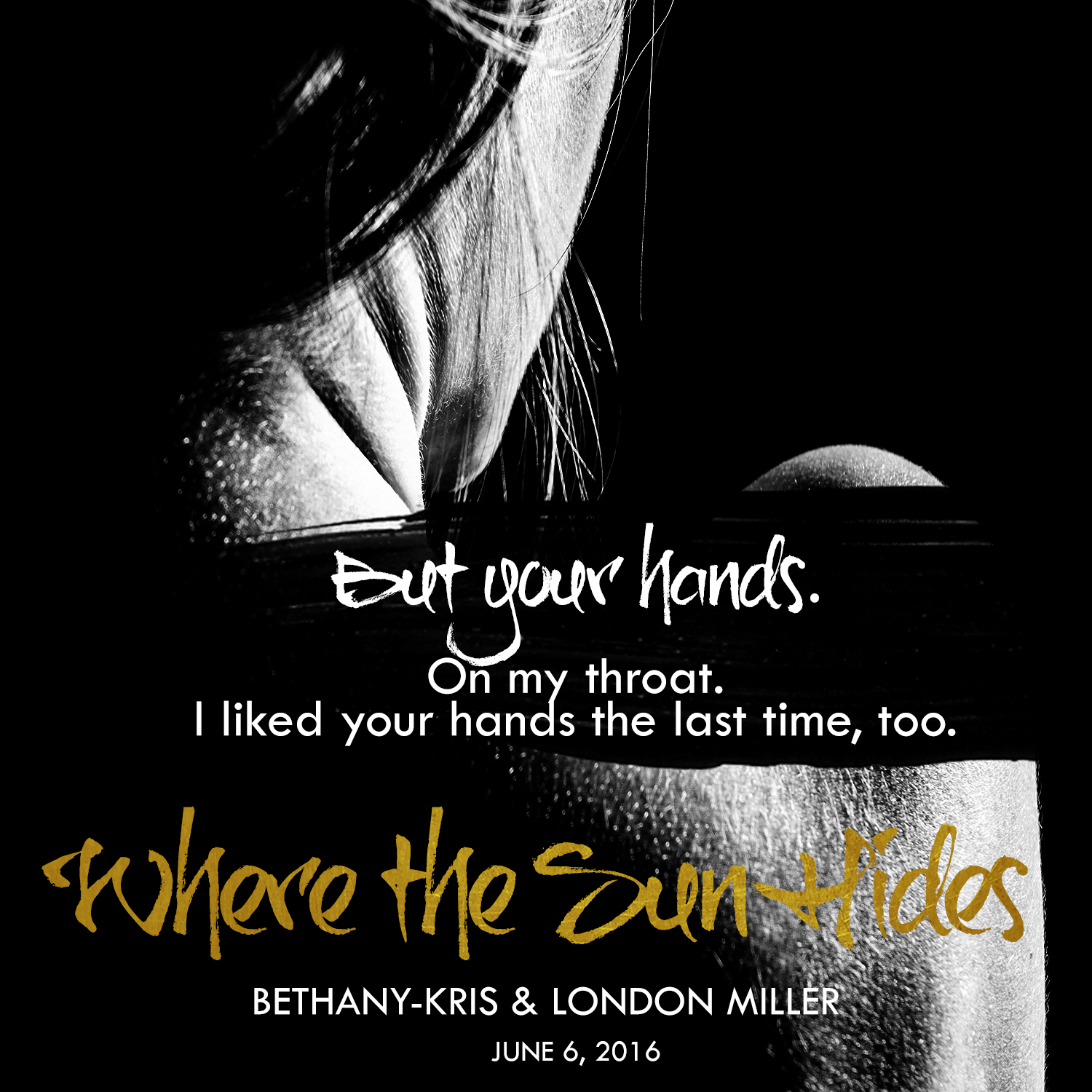 Bethany-Kris is a Canadian author, lover of much, and mother to three young sons, one cat, and two dogs. A small town in Eastern Canada where she was born and raised is where she has always called home. With her boys under her feet, snuggling cat, barking dogs, and a hubby calling over his shoulder, she is nearly always writing something... when she can find the time.

To keep up-to-date with new releases from Bethany-Kris, sign up to her New Release Newsletter.

With a degree in Creative Writing, London Miller has turned pen to paper, creating riveting fictional worlds where the bad guys are sometimes the good guys. Her debut novel, In the Beginning, is the first in the Volkov Bratva Series. She currently resides in Atlanta, Georgia with her husband and two puppies, where she drinks far too much Sprite, and spends her nights writing.

Charity For Nothing
The Virtues Trilogy #3
by
A.J. Downey 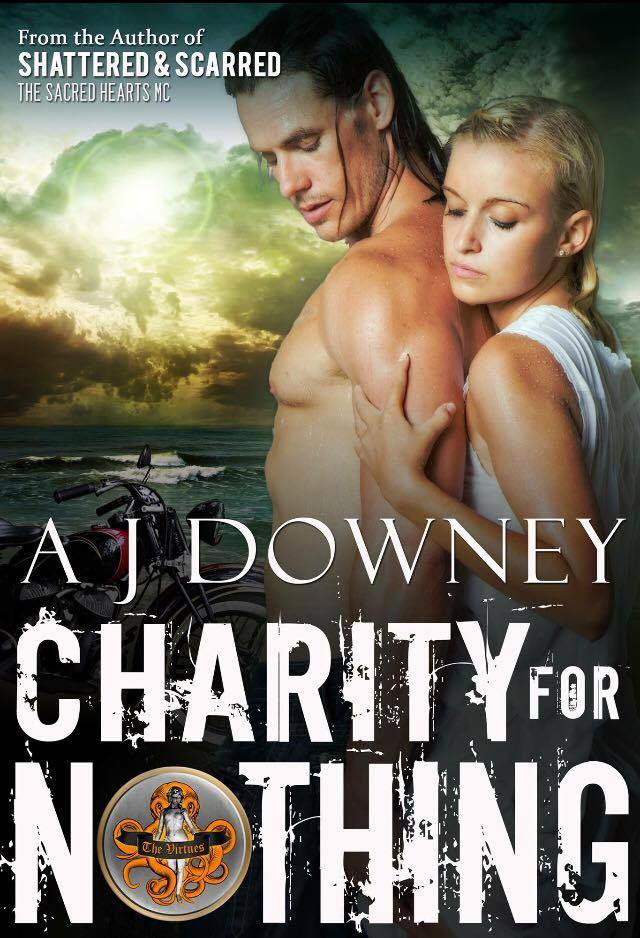 Charity is home free: her degree under her belt and making a beeline, straight for sunny Ft. Royal, and her sisters, Hope and Faith. Excited to see them, yet having been warned by Hope to watch herself when it came to the disarmingly charming ways of The Kraken, Charity never expected to walk right into the one man to flip all of her switches to the 'on' position before she'd even taken a dozen steps into town.

Nothing was everything she liked. Tall, handsome, with a pair of eyes that any woman should swoon over. Just the right mix of tortured bad boy to pique all of her healer's instincts. Charity knew that the men of The Kraken played for keeps; all except, it seemed, for this one. Too bad no one told The Kraken that she played for keeps, too. 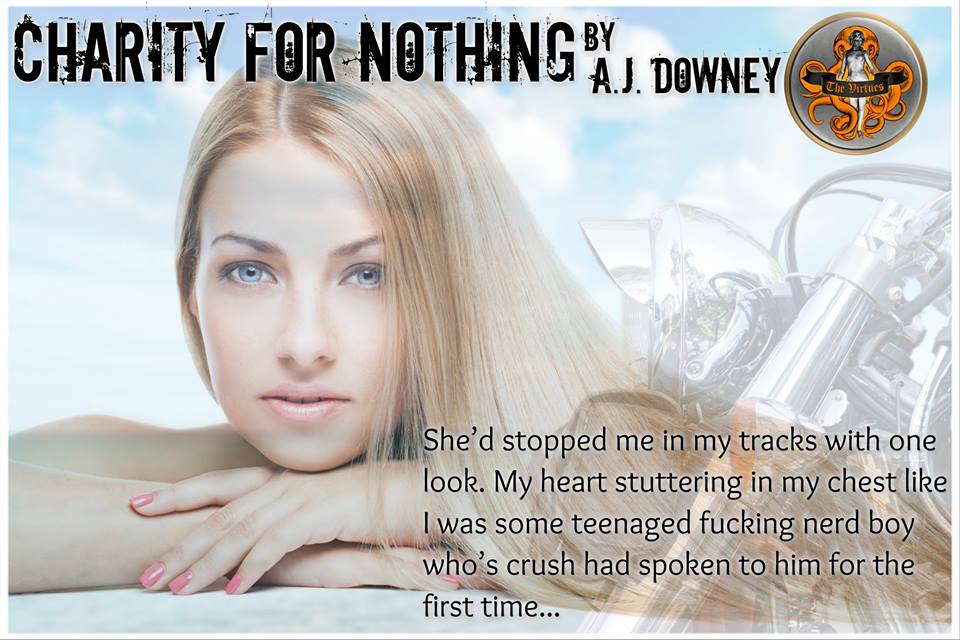 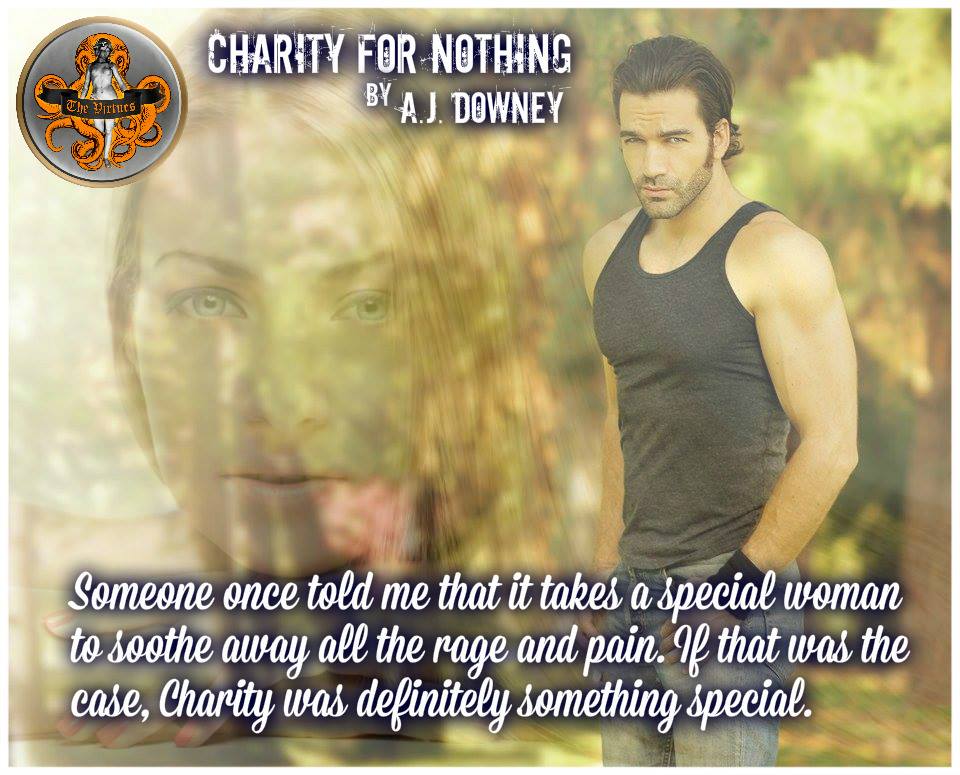 Shit. Charity dropped onto the barstool beside mine and dropped her keys on the scarred wood surface of The Plank's bar. She raised an eyebrow at me.

"It's raining again, figured I could offer you a ride home, seeing as your bike is in the shop and Marlin has your car."

"I'm good," I said and downed the shot of Crown in front of me. Lightning took the shot glass off the bar and sighed.

"You're done, Bro. I ain't going to watch you do this to yourself all over again."

"Let me take you home?" she asked gently. I shook my head and ran a hand over my hair.

"Okay, fine. Then I'll sit right here until you are."

"Fuck, really? Go find someone else to take care of," she flinched at my tone but I didn't apologize or back down. I was bad news, she didn’t need any of what I had to offer. She was a nice girl... Corrine had been a nice girl, too. Corrine and I had made the sweetest little girl together... Fuck. Fuck, fuck, fuck, fuck, fuck.

"It's the time of year, Honey. It's not you," Hossler said at my elbow.

"You're drunk and acting like an asshole; Charity's a guest. Take your sorry ass home, Nothing. People are sick of your fucking pity party for one."

I stood up abruptly and staggered, definitely unsteady on my feet. Charity reached out and put a hand on my arm but I jerked away from her.

"Just fucking stay out of it, all of you!" I barked and headed for the door.

I saw Radar get up out of the corner of my eye and I didn't want to deal with him, or anyone, so before he could get to me I went out the door and into the pouring rain outside. He caught up to me, grabbed my elbow and I was in the mood to force the issue. I turned and raised my fist but was cold cocked by Charity's glacial stare before I could swing.

"I could ask you the same thing, except I'm done asking. Get your ass in the Jeep."

I blinked and opened my mouth to reject the notion but before I could, she was speaking again, tone full of consternation.

"You can either, get your ass in the Jeep and let me drive you home, or I can tell your leader how you almost cold cocked his woman's sister in the face." She arched a light brow, her face set in stone and I shut my gob and looked this way and that, striking out in the direction of her white Jeep Wrangler.

Text Copyright © 2015 A.J. Downey
This is a work of fiction. Names, characters, businesses, places, events and incidents are either the products of the author’s imagination or used in a fictitious manner. Any resemblance to actual persons, living or dead, or actual events is purely coincidental.
All Rights Reserved 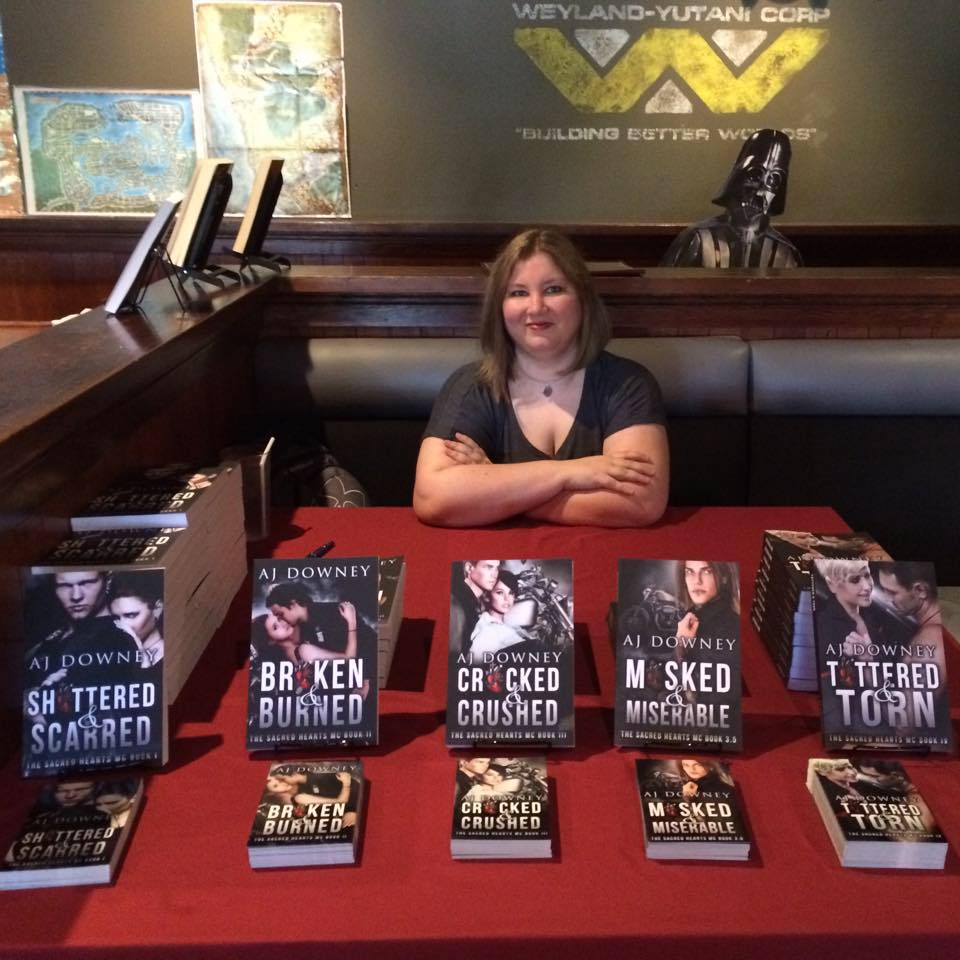 A.J. Downey is a born and raised Seattle, WA Native. She finds inspiration from her surroundings, through the people she meets and likely as a byproduct of way too much caffeine.

She has lived many places and done many things though mostly through her own imagination... An avid reader all of her life it's now her turn to try and give back a little, entertaining as she has been entertained. She lives in a small house in a small neighborhood with a larger than life fiancé and one cat. 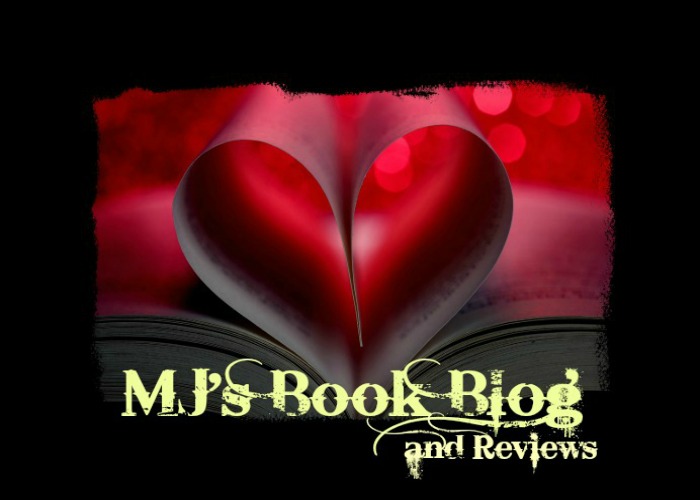 ♡ Hottie of The Day ♡ Ricky Whittle