From authors Chelle Bliss and Brenda Rothert comes a smoldering standalone enemies to lovers romance that will, ahem... check all your boxes.

Reagan
I hate him. Jude Titan is everything that's wrong with the male sex: cocky, domineering and loaded with swagger. Oh, and did I mention he's a Republican? Yeah, the guy's so conservative he leans to the right when walking. And lucky me, I'm running against him for Senate. But I've got plenty of fight in me. A golden boy war hero opponent with a smile that leaves melted panties in its wake? Bring. It. On.

Jude
Damn, she's sexy. Reagan Preston intrigues me from the moment I lay eyes on her. And speaking of laying... I want between those thighs. But I want to make her burn for me first. Every debate and stolen moment is foreplay for us. She claims she hates me, but her body tells a different story. I plan to win this election, but I also want to win the sharp, fiery Democrat who captures my attention like no woman ever has. Politics is filthy, just like all the things I want to do to Reagan Preston.

My hands are covering my face, and I crack two fingers open to make a "V" I can see the TV screen through.

"He definitely does," my friend and campaign manager, Alexis, says.

I close my fingers and go back to the blissful blackness of not seeing my new opponent, Jude Titan. "Why does he have to be so damned attractive? And…heroic? Attractive or heroic, I think I could handle, but both?"

"Sorry." She turns to me and takes my wrists, easing my hands down. "Look, we'll find his weak spot. I mean, the guy's never run for any office. Your political experience started in the womb."

I roll my eyes. "Lex, being from a family with a history in politics is good and bad. It's mostly bad against Jude Titan. He's a war hero, returning home to shake up the establishment. No baggage. Just a chiseled jawline and a huge smile and a Medal of Honor around his neck."

Lexi gets a dreamy look on her face, and I shove her. "Stop picturing him wearing nothing but the medal."

"I wasn't," she says, her fair cheeks darkening.

"I may have been," she admits.

"I am so fucked." I lean back against the thinly upholstered bench at the fold-down kitchen table of my campaign bus.

"Game face," Lexi reminds me. "You were fine the first time we watched this announcement."

"It's different when the entire staff is in here. With you, I can be myself."

"Yeah, I know." She glances at her wristwatch. "Hey, you want me to reschedule your stuff for the rest of the day, and we can wallow? I'll allow you six hours to wallow before we put our big-girl panties back on."

I smile. "Thanks, but no. I need to do those interviews and that speech to put on a good face about running against Titan." I shake my head. "Ugh, even his name reeks of power and capability. I've really got my work cut out for me."

"I'll be right beside you. And your father will be, too."

"You unseated Paul Hawthorne after he«d served five terms in the state house," Lexi reminds me. "Your approval rating is strong. And since when do you back down from a fight?"

She's getting animated now — her short red corkscrew curls are bouncing as she talks. I love this girl. She's been by my side since we met as college sophomores a little more than ten years ago.

Lex snorts and laughs. She covers her mouth with her hand. "Sorry. Maybe he will." She clears her throat and tries to stop smiling but just ends up laughing again.

Brenda Rothert is an Illinois native who was a print journalist for nine years. She made the jump from fact to fiction in 2013 and never looked back. From new adult to steamy contemporary romance, Brenda creates fresh characters in every story she tells. She’s a lover of Diet Coke, chocolate, lazy weekends and happily ever afters.

Chelle Bliss, USA Today Bestselling author, currently lives in a small town near the Gulf of Mexico. She's a full-time writer, time-waster extraordinaire, social media addict, and coffee fiend. She's written over thirteen books and has three series available. She loves spending her free time with her boyfriend, 2 cats, and her hamster.

Before becoming a writer, Chelle taught high school history for over ten years. She holds a master's degree in Instructional Technology and a bachelor's in history. Although history is her first love, writing has become her dream job and she can't imagine doing anything else.

Stay the Night
A Day of Pleasure #3
by
Cora Cade 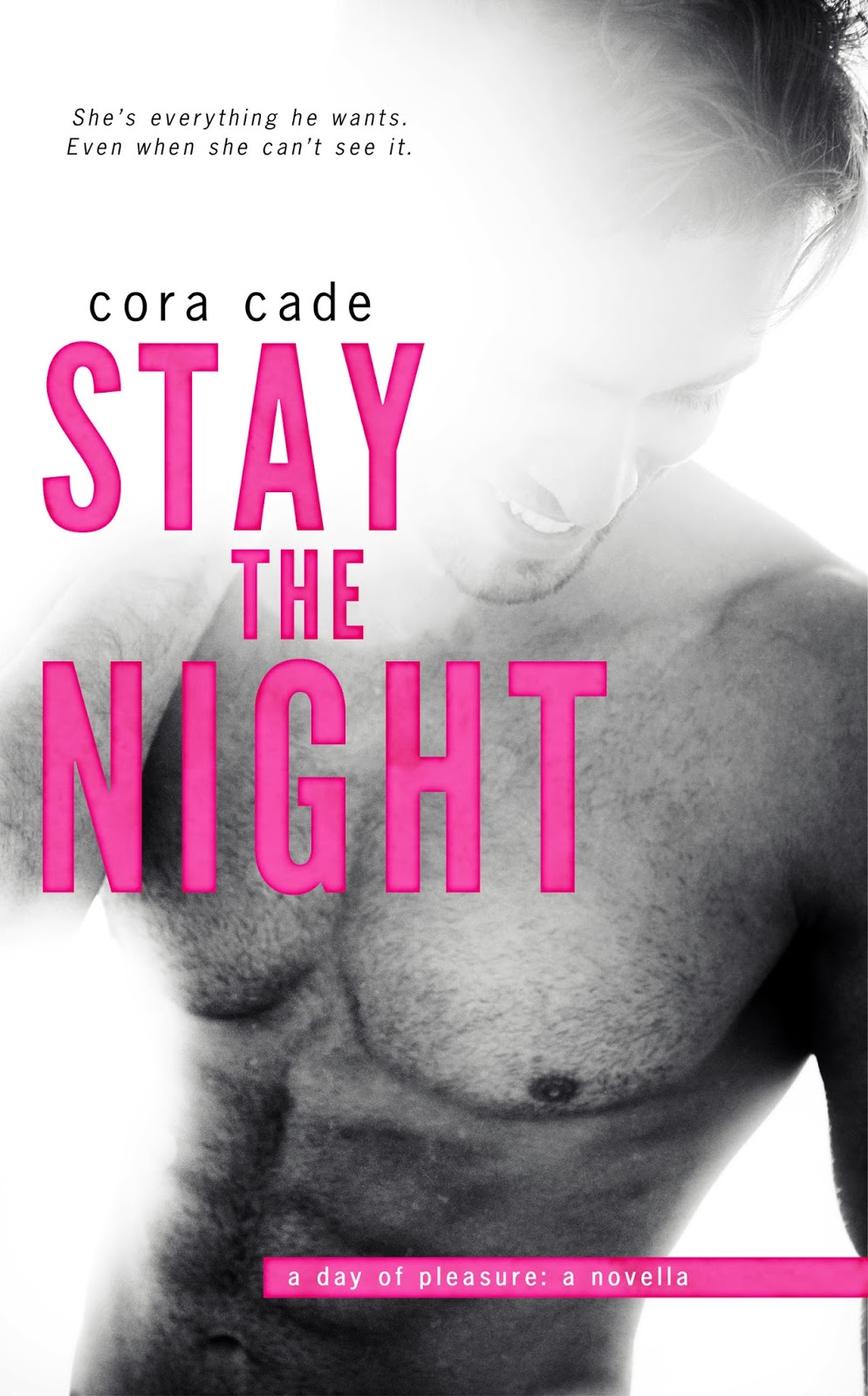 She's everything he wants. Even when she can't see it.

After her last relationship ended in the hospital, Lainey Eversman ditched Ohio to start fresh in a sleepy North Carolina town. Her tiny apartment above the Drunken Duck may be cramped, but she's ready to let her big dreams erase those bad memories.

When she sprains her ankle, she reluctantly accepts Chris Harper's help to cut her last few ties to Ohio, though she dares not accept anything else from the sexy architect. The last thing she can trust is her instincts when it comes to men.

Chris knew the fiery Lainey was his one and only the moment he set eyes on her. If only she'd let him get closer than arm's length. But their trip to Ohio cracks the walls shielding her vulnerability, and she finally, hesitantly, takes that last step into his arms.

It' still going to be tough to convince her to give love a fighting chance — especially with an ex who won't take "go away" for an answer.


Warning: Contains a small-town hero who'll do anything to convince a skittish big-city girl that he's a safe bet. Expect loyal friendships, sweet kisses, and hot, dirty sex in the great outdoors.

The idyllic countryside of Lainey Eversman's new home left a lot to be desired when you were under attack by mutant country spiders. Four weeks ago she'd purchased ten lakeside acres in the lush mountains of North Carolina. Currently she was standing on a rickety kitchen chair swatting at a horde of massive spiders crawling through a crack in her cabin's ceiling. All the while wishing desperately she'd never left the confines of city life.

She was trying admirably to not freak out like a total pansy, but when a shower of leggy spiders fell in her hair she gave up the fight. Giving a little squeak she launched herself from the old wooden chair and began to dance around like a lunatic while brushing her hands madly through her hair.

After a brief tussle with her own ego, she finally gave up and headed for a real shower. The kind with water and soap. No one had to know she'd nearly had a meltdown over a few spiders. Those ten acres, so happily purchased a few weeks ago, had come with a tiny hunting cabin. One room encompassing a very small and formerly very dirty shower, a toilet, a kitchen sink the size of her favorite pair of shoes, and a mini fridge fresh out of the box, all in a twelve-by-twelve room.

At the time it had seemed like the perfect place to hang tight while she had a place built. In retrospect she should have taken her brother and his girlfriend up on the offer to make use of their guest room until the build was completed. She loved both Cal and Molly, but she had little interest in finding them in compromising positions all over the apartment. Given the pair of them, it would be near impossible to catch them doing anything but getting frisky.

The creepy cabin in the middle of nowhere was her home for the duration. It wasn't so bad, aside from the bugs, the smothering summer heat, and the incessant nature noise. No one ever told her living in the sticks was loud. Since her first week in the cabin she'd been serenaded nightly by an orchestra of bullfrogs, crickets, and assorted evening critters. Every morning the birds woke her at first light. Eventually she'd adjust to the nature sounds, but to date she'd been averaging about six hours a night; not really enough to feel rested. Altogether leaving her just a little bit cranky from lack of sleep.

In theory living alone surrounded by nature was an amazing retreat, but in reality it was quite the adjustment for a city girl leaping into the next stage of her life.

After scrubbing all the spider particles from every square inch of her body she exited the shower and tossed on a pair of simple cotton panties and the thinnest tank top she could find. It was a beautiful August evening, but the heat of the day hadn't dissipated enough to leave Lainey comfortable. The heat and humidity left her feeling sticky the moment she toweled off from the shower.

Being a half-mile down a winding lane in the middle of nowhere had its perks. Sitting on her miniscule porch in her underwear with her feet propped up was definitely one of them.

Well, until she saw a car's lights turn off the main road and make its way toward the cabin. It could only be a handful of people. Her brother Cal, Cal's girlfriend Molly, or more likely Chris. Chris the hottie architect that she'd met through Cal and Molly, who was contracted to redesign the coffee shop she'd purchased.

Given the light glow of a near full moon, Lainey guessed it to be nearly ten. Rather late for a business meeting. Finally, she determined it was Chris, as his sleek black car eased slowly closer until it was nearly ready to park next to her own car on the far side of the porch. Lost in her own thoughts, she was about to greet the hottie architect in her panties.

Launching herself to her feet in an effort to reach the front door of the cabin before Chris cleared the porch was easier said than done. In her rush she almost crushed a cricket with a poorly placed foot. Attempting to save the cricket's life, Lainey lurched to the left and managed to trip over her own feet. Landing in an inelegant pile, she watched the cricket hop away unharmed.

As she was attempting to right herself Chris stepped into view and halted his progress at the foot of the porch.

Morning Light
A Day of Pleasure #1
by
Cora Cade 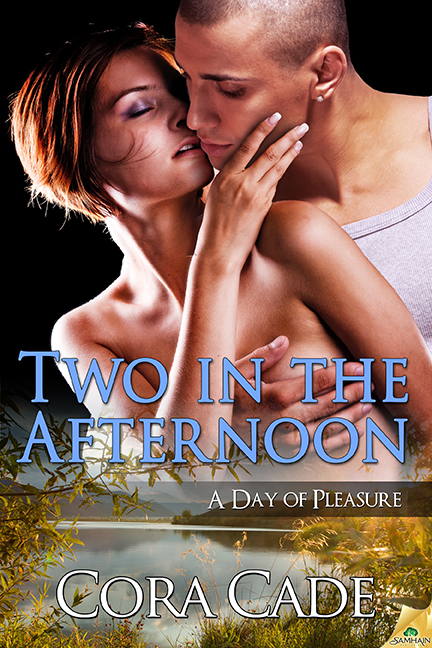 Nestled away in a small town in Ohio, I spend my days adding delicious books to my library, snuggling with my three rotten dogs, and debating the finer points of life with the dear husband. When I'm not tucked away with a book you can be find me tapping away at my laptop. With coffee. And my playlist.

♡ Hottie of The Day ♡ Marlon Teixeira