For the first time ever, all five stories in the Explosive series have been packaged into one hot box set and will only be available for a limited time. Pre-Order for just 99 cents! The price will increase on release day, so don't miss out on the sale!

Fall in love with the entire gang in the Explosive series! Each standalone romance contains saucy heroines, sexy heroes, and a whole lot of love between the pages. Enjoy five incredible stories whose pages are loaded with passionate love, burning desire, and a whole lot of steam! Second chance romance, friends with benefits, surprise pregnancy, marriage of convenience, and laugh out loud friends to lovers, what more could you want?

Ignite, #1
Alexa Sullivan-Tate, a young widow, and Jace McAllister, her first love, reconnect in this passionate second-chance romance. But when love has slipped through your fingertips before, how can you trust it will once again remain? They loved and lost before, but can they dispel the ghosts of the past and discover a new future?

Incinerate, #2
Sparks fly and tempers flare when Charlie Davenport, a feisty brunette, crosses paths with wounded warrior, Knox Wellington. Their chemistry is undeniable, but the chip on his shoulder threatens to destroy any hope of him wooing the sweet, southern volunteer send to help with his rehabilitation. Head butts, patience is tested, and flames of passion ignite as they dance around their mutual attraction, both jaded from broken pasts. Will they finally be able to get over the pain of the past or will their relationship be reduced to ashes before it can actually begin?

Inflame, #3
For sexy soldier Kale Montgomery and sweet, sassy schoolteacher Lucy Dawson, love was never in the cards. Their relationship, though unconventional, is mutually beneficial. One fateful night changes their lives forever in ways they could never imagine, giving them the push to admit that maybe, just maybe, they want more than they let on. Will Kale and Lucy realize what they've been waiting for is each other, or will the whirlwind of their romance cause the passion to burn out too quickly, causing it all to go up in smoke?

Intoxicate, #4
Kalli Montgomery never expected to propose to Xavier Cruz, even though she's been in love with the sexy, single father for as long as she can remember. He never expected to accept, but when circumstance threatens to take his daughter from him, he'll do whatever it takes, even if it means marrying a woman he doesn0t love. This marriage of convenience has one rule: absolutely no falling in love. Easier said than done. Throw together a girl who believes rules are meant to be broken, and a man whose entire career revolves around following orders, you get a recipe for disaster. What could possibly go wrong?

Fusion, #5
Where do babies come from? The question every parent dreads hearing has finally fallen from the lips of six-year-old Ava Banks, the curious, precocious daughter of high school sweethearts, Jeremy and Sierra. Normally blunt as can be, they find themselves struggling to find the right words to answer her. So instead, they rewind sixteen years to that one fateful day where a game of Seven Minutes in Heaven inevitably led to life-long romance filled with laughter, love, and many, many mishaps along the way.

Falling in love with your best friend? It's the most incredible thing in the world. As long as it lasts. When the world comes crashing down around you, can even the strongest relationship withstand great tragedy? 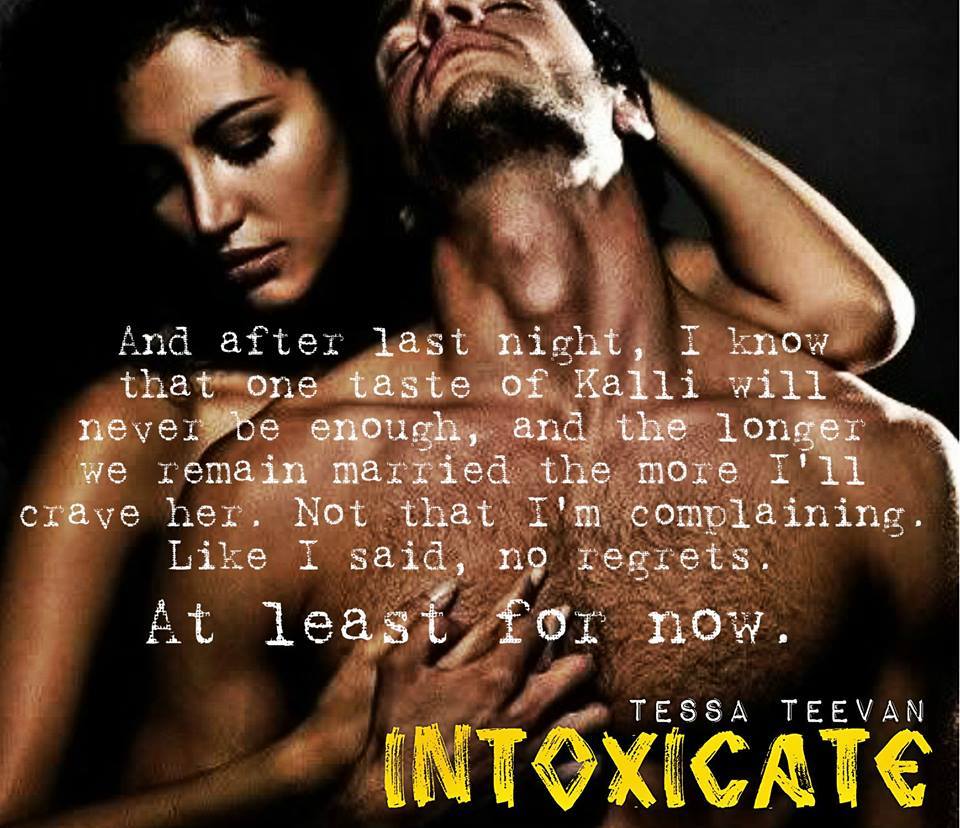 Tessa is a twenty-something book junkie who's obsessed with sports and cycling. She's been married to her own book boyfriend for nearly ten years whose traits often show up in her books. If she's not writing or looking through tons of photos of hot men, all in the name of research, then you can probably find her curled up with my Kindle, ignoring the rest of the world. She loves my sports almost as much as she loves her books. Her other obsessions include red wine, hot men, country music, and all things Grace Potter. 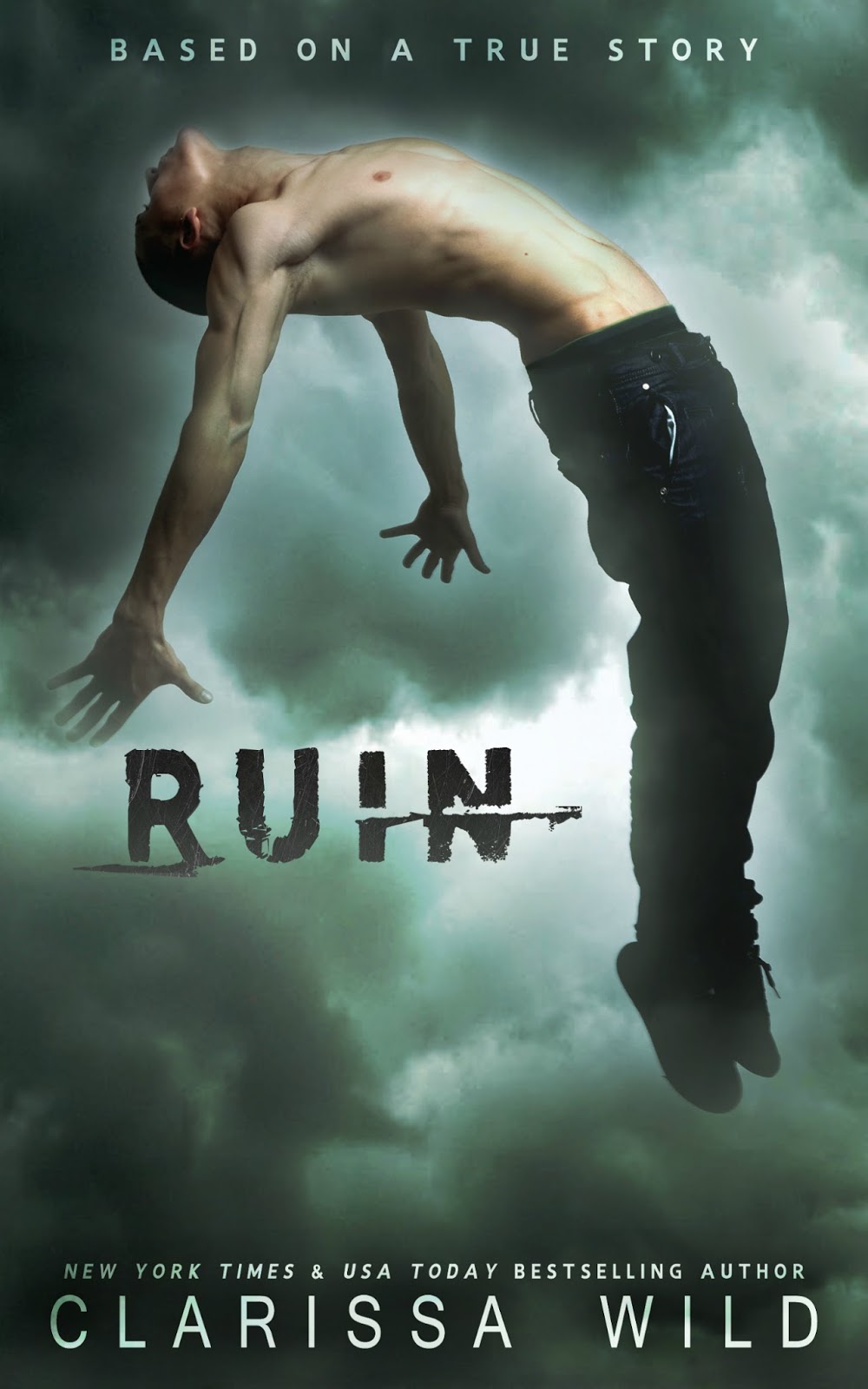 Maybell Fairweather was the girl of my dreams.

Always smiling brightly, she kept going, despite the names her classmates called her behind her back.
She was full of curiosity and independence, the extent of which I could only be jealous of. Even though she had all odds stacked against her, she knew what she wanted from life and pursued it, no matter the cost.

She was completely my opposite in every way.
Perfect, even though she couldn't see it.
Perfect... until me.

Because this is the story of how I ruined her.


Based on a true story. Standalone Romance. No cliffhanger. 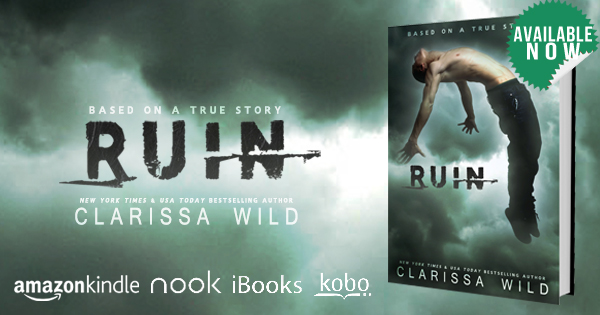 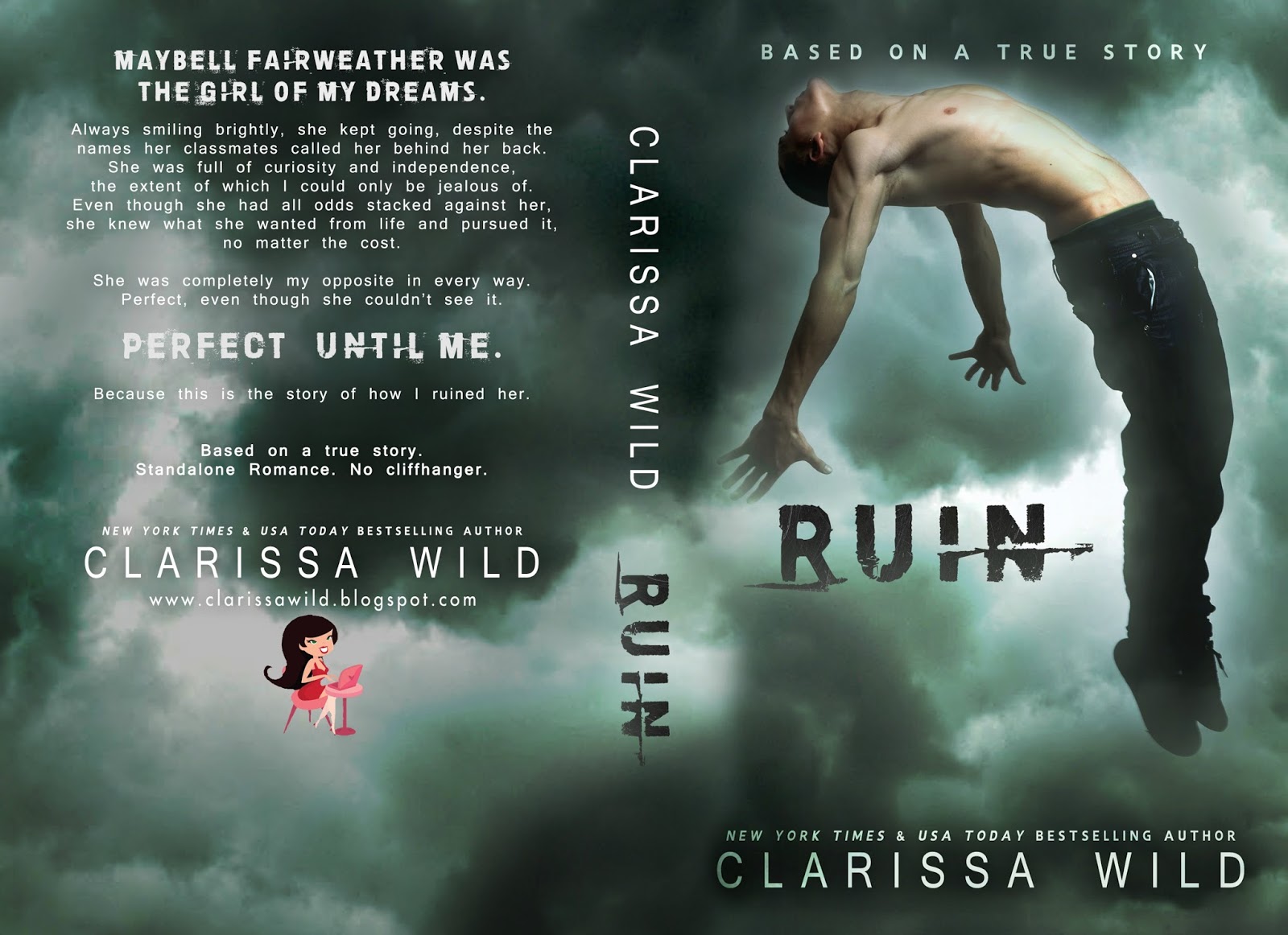 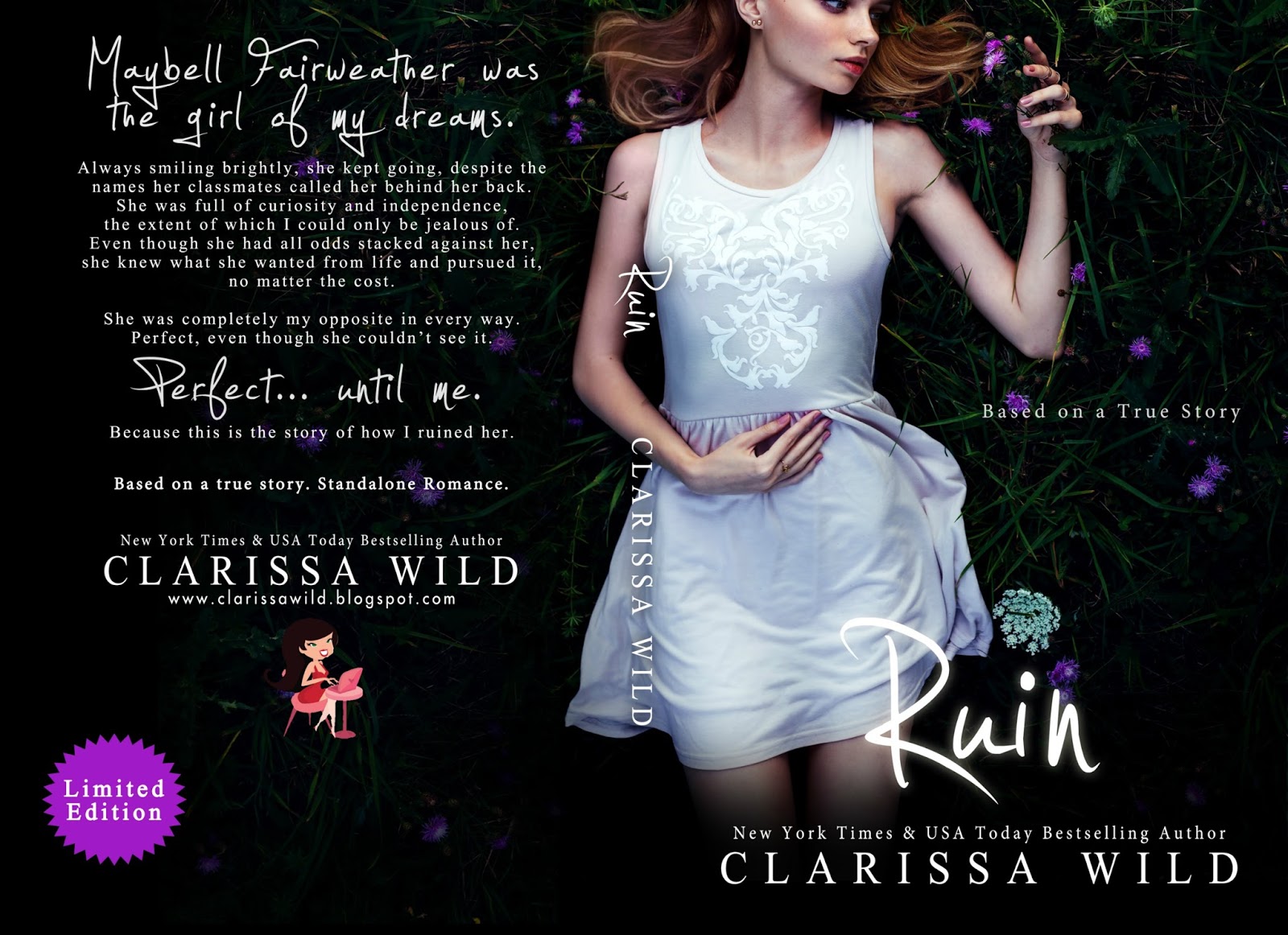 Ruin is also available with a limited edition cover. This edition is only available in paperback and can be purchased directly from Clarissa Wild.

Join Clarissa's Fan Club where she will be celebrating the release of Ruin with lots of giveaways all week.

"I needed that..." she murmurs, closing her eyes again.

"I know you did." I smile cheekily.

She lets out a long, drawn-out sigh. "Alex Wright... you seem to know everything."

"Really now?" She opens one eye.

"I know you better than you think," I say.

Now, both her eyes are open but hidden underneath thick lashes and a curious frown. "Really? Then what am I thinking right now?" She smirks as her feet dangle below the bench, one swaying, the other unmoving, and there is only one thing I can think of.

A tiny leaf that's fallen on top of her head makes my hand move closer to swipe it away, but I linger. My fingers gently trail along her soft dark blond hair, past her ears and down her cheeks, until they reach her chin. There, I subtly grasp her between my thumb and index finger and lean in, cocking my head. My eyes slowly close, the sound of her short breaths pulling me in.

Before I know it, my lips have locked with hers.

I don't know why I'm kissing her.

Well, other than the fact that I've been madly in love with her all this time.

She was just perfect.

Perfect, just the way she is.

Her scrunched-up face and rosy lips... just had to be kissed.

I don't know what I'm doing. I've only ever kissed one other girl, and that was in kindergarten. I have no fucking clue, but I hope I'm doing it right. She isn't stopping me or pushing me away, so that's a good thing. Right?

But damn, she tastes so sweet, and her lips are so soft.

No wonder everyone likes to do this so much.

After a while, she needs to take a breath, and our lips unlock. Her eyes wide and her lips parted, still swollen, heavy, much like mine, and all I can think of is kissing her again.

Is it so wrong to want the thing I shouldn't have?

She tucks a strand of her wild hair behind her ear, her cheeks turning red as a strawberry, but I like the color. I can't stop looking at her, but it's growing awfully silent too. She's still so close to me; I can feel her warm breath tingle on my skin.

"This?" I murmur, as an answer to her question.

She bites her lip to stop herself from smiling. "I..."

Her smile only makes me feel more bold, so I place my hand on her cheek and pull her even closer. "I just want to make you happy."

I lean in again and press another soft kiss on her lips, the touch exhilarating me. Goose bumps scatter across my skin as I taste her on my lips. My blood rushes through my body to the only spot it can go to, the sudden burst of greed filling me. My pants tighten as my dick flinches from her lips alone.

God, I need to stop. This isn't right.

I clear my throat as we both turn red as a beet.

"Well..." I get up from the bench and turn away for a second to cool down my manly parts. I even think of the delusional grandpa she has for a neighbor just so I can rid myself of this hard-on. Anything to make it go away quicker.

When I've cooled down, I turn to her and smile. She's still looking at me. Her lips still parted, her face still in shock mode. I can only hope my guess was right, but I won't ask. I'll let her decide.

So I hold out my hand and say, "Let's go back inside."

For a second, she just stares at me, then my hand, and then me again.

Her hand slowly reaches for mine.

The tip of her lips points upward.

That's when I know. 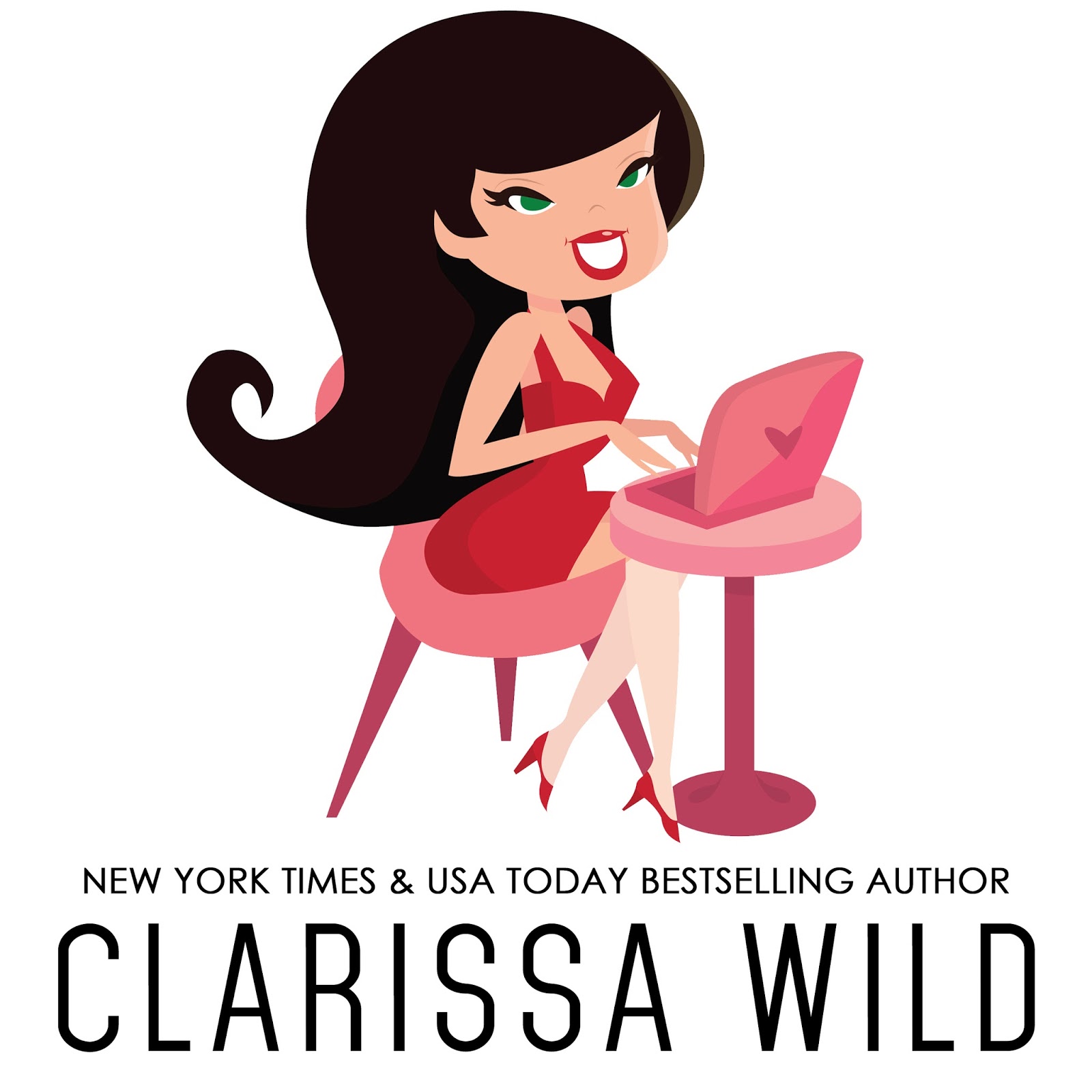 Clarissa Wild is a New York Times & USA Today Bestselling author, best known for the dark Romance novel Mr. X. Her novels include the Fierce Series, the Delirious Series, Stalker Duology, Twenty-One (21), Ultimate Sin, VIKTOR, and Bad Teacher. She is also a writer of erotic romance such as the Blissful Series, The Billionaire's Bet series, and the Enflamed Series. She is an avid reader and writer of sexy stories about hot men and feisty women. Her other loves include her furry cat friend and learning about different cultures. In her free time she enjoys watching all sorts of movies, reading tons of books and cooking her favorite meals.

♡ Hottie of The Day ♡ Mikey Heverly