Today we are celebrating the cover reveal of DIRTY SECRET by Chelle Bliss & Brenda Rothert.

This book is a contemporary romance, standalone, title that you won't want to miss!

Check the links below to pre-order it, or the previous book in this standalone series, Dirty Work.

After living her life in the shadows as the daughter of a congressman's secret affair, Kennedy Barnes joins 'Project Greenlight' - a clandestine intelligence organization. She's out to prove she's more than her father's dirty secret.

One of her first assignments is simple. Get close to Phoenix Ash, collect enough evidence to put him away for life, and get out unscathed.

Phoenix Ash is a world renowned hacker. He's pulled off some of the biggest heists in modern history, but never leaves a trace. He knows people are after him and that every day may be his last, but when he meets Kennedy Barnes everything changes.

Lines are blurred and secrets are exposed as Phoenix and Kennedy both discover they do have a weakness - for each other.


This is a STANDALONE novel, but is interconnected with Dirty Work, which is now available. 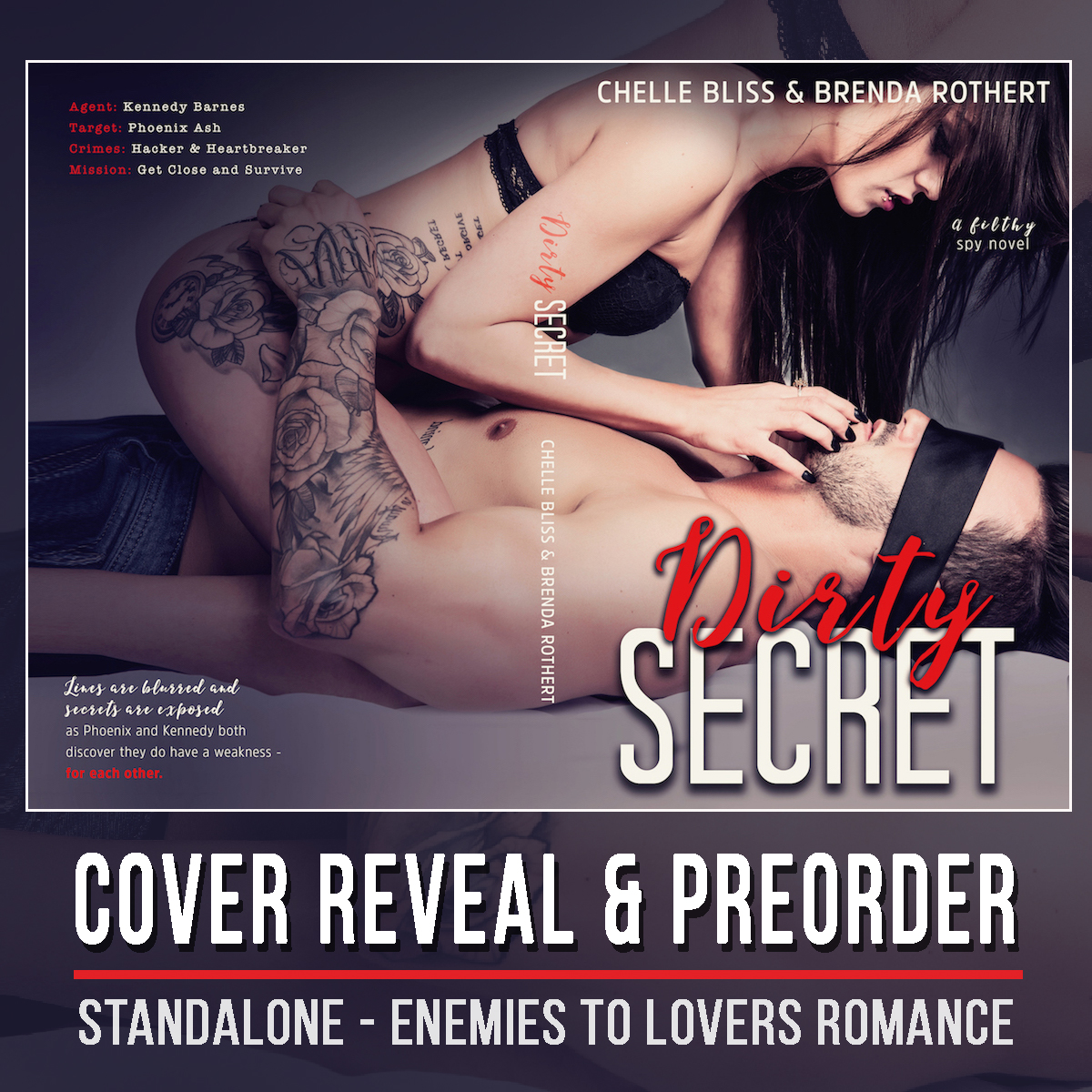 From authors Chelle Bliss and Brenda Rothert comes a smoldering standalone enemies to lovers romance that will, ahem... check all your boxes.

Reagan
I hate him. Jude Titan is everything that's wrong with the male sex: cocky, domineering and loaded with swagger. Oh, and did I mention he's a Republican? Yeah, the guy's so conservative he leans to the right when walking. And lucky me, I'm running against him for Senate. But I've got plenty of fight in me. A golden boy war hero opponent with a smile that leaves melted panties in its wake? Bring. It. On.

Jude
Damn, she's sexy. Reagan Preston intrigues me from the moment I lay eyes on her. And speaking of laying... I want between those thighs. But I want to make her burn for me first. Every debate and stolen moment is foreplay for us. She claims she hates me, but her body tells a different story. I plan to win this election, but I also want to win the sharp, fiery Democrat who captures my attention like no woman ever has. Politics is filthy, just like all the things I want to do to Reagan Preston.

Brenda Rothert is an Illinois native who was a print journalist for nine years. She made the jump from fact to fiction in 2013 and never looked back. From new adult to steamy contemporary romance, Brenda creates fresh characters in every story she tells. She’s a lover of Diet Coke, chocolate, lazy weekends and happily ever afters.

Chelle Bliss, USA Today Bestselling author, currently lives in a small town near the Gulf of Mexico. She's a full-time writer, time-waster extraordinaire, social media addict, and coffee fiend. She's written over thirteen books and has three series available. She loves spending her free time with her boyfriend, 2 cats, and her hamster.

Before becoming a writer, Chelle taught high school history for over ten years. She holds a master's degree in Instructional Technology and a bachelor's in history. Although history is her first love, writing has become her dream job and she can't imagine doing anything else.

Some are born with fire in them.

✮✮✮ SECOND CHANCES, HOPE, & RED-HOT CHEMISTRY... FIRE IN YOU, the final book in the #1 New York Times bestselling Wait For You World is here! Don't miss Brock and Jillian's passionate and richly moving story in this standalone contemporary romance! ✮✮✮

Let the FIRE IN YOU burn and grab your copy today!

Fire In You
Wait For You #6
by
Jennifer L. Armentrout

From the # 1 New York Times and International bestselling author comes a richly moving story about heartbreak and guilt, second chances and hope. Full of familiar, fan-favorite characters and no two people more deserving of a happy ending, Fire In You will burn bright beyond the last page...

Jillian Lima's whole world was destroyed in a span of a few hours. The same night her childhood love, Brock 'the Beast' Mitchell, broke her heart, her life was irrevocably altered by the hand of a stranger with a gun. It takes six years to slowly glue together the shattered pieces of her life, but Jillian is finally ready to stop existing in a past full of pain and regret. She takes a job at her father's martial arts Academy and she's going out on her first date since a failed relationship that was more yuck than yum. Jillian is determined to start living.

She just never expected Brock to be a part of her life again. But he's firmly back in her life before she knows it, and not only is he older, he's impossibly more handsome, more teasing and more everything. And when he sees Jillian, he’s no longer capable of thinking of her as the little girl who was his shadow growing up or the daughter of the man who gave him a second chance at life. He sees the woman who'd always been there for him, the one person who believed in him no matter what.

Brock knows she's the one he should've made his, and what begins as a tentative friendship quickly turns to red-hot chemistry that sparks a flame that burns brighter than lust. Falling for Brock again risks more than her heart, because when the sorrow-filled and guilt-ridden past resurfaces, and a web of lies threatens to rip them apart, the fallout could lay waste to everything they've fought to build together, and destroy the dreams of those they care most about.

Order a digital or paperback copy of FIRE IN YOU by Jennifer L. Armentrout, writing as J.Lynn, AND fill out the form by December 3rd, and get an exclusive bonus scene - an Epilogue featuring POVs from all the major couples throughout the Wait For You World!

FIRE IN YOU will be available in paperback and eBook November 28th, 2016!

Just enter your name, age, email address, and the order number from your digitalor paperback pre-order receipt to receive your exclusive FIRE IN YOU bonus scene! All entrants will receive the bonus scene on December 5th, 2016 through email using the email given when the entrant filled out THIS FORM.

Making my way through the narrow pathways between the tables, I headed back toward the bathroom. Only once I pushed open the double doors and stopped in front of the water-spotted mirror did I realize I'd left my purse at the table, so there'd be no reapplying my lipstick.

I pumped soap onto my hands and waved them under the facet. Water flowed, washing away the suds as I slowly lifted my gaze to my reflection. Normally when I looked at myself, I didn't really pay attention longer than was necessary to put makeup on without ending up looking like a tutorial gone wrong.

Standing here now, I really looked at myself, though.

I used to wear my hair up all the time, but I'd stopped doing that every day. My hair now hung in waves and the ends curled over the tips of my breasts. I also used to have heavy bangs, but thank God they were long gone. I'd finally learned how to put on eyeliner. That was another miracle. The slight flush of my face darkened my naturally tan skin. My lips were fuller and my nose straight.

My hair was parted to sweep to the left so it shielded my cheek... and my cheek didn't look that bad, especially considering how it looked the first time I'd seen it after... after days in the hospital.

Hell, my entire face had been one hot mess.

There was a deep indentation in my left cheek, almost like an icepick had been shoved in there, and as I stared at my right jaw line, I was still amazed by what reconstructive plastic surgeons could accomplish. Half my face had literally been pieced back together with an iliac crest graft with a reconstruction plate and a crap ton of dentistry to give me back a full set of functional teeth.

Plastic surgeons didn't have magic wands, but they were magicians. If you weren't looking at me straight on, you'd have no idea that my right jaw was thinner than my left.

You'd have no idea what had happened to me that night.

Now I stared back at myself just like I had done that night, six years ago, standing in a bathroom, mere minutes before my entire life came crashing down.

It wasn't that I hated the way I looked now. The fact that I was alive meant I was one of those rare, walking and breathing statistics.

But even knowing how lucky I was didn't change the fact that I felt... deformed. That was a harsh word to use. I didn't like to whip it out often. Doing so on what was so far a pretty good date was probably not a good idea.

Taking a deep breath, I shook my head. I didn't need my thoughts going in that direction tonight. So far, the dinner had been amazing. Grady was nice and he was cute. I could maybe see myself going out with him again, to an art exhibit, and maybe coffee.

And that was what had freaked me out.

I was not going to let living freak me out.

I could give him a chance and not worry about whether or not I was settling.

Turning from the sink, I dried my hands and then readjusted my hair so it fell forward, over my left shoulder and cheek. I walked out of the bathroom and into the narrow hall, gaze trained on the floor as I took about two steps before I realized someone was standing right outside the door, leaning against the wall. Before I nearly plowed into him.

Gasping, I took a step back. All I could see were finely cut black trousers paired with... with old black and white Chucks? What an odd combination, but those shoes reminded me of...

I gave a little shake of my head and stepped to the side. "Sorry. Excuse—"

Everything stopped except my heart, because it was suddenly pounding in my chest too hard, too fast. That deep, rough voice. I recognized it all the way to my very core. Slowly, I lifted my gaze, already knowing what I was going to see but refusing to believe it.

Brock Mitchell stood in front of me.

#1 New York Times and #1 International Bestselling author Jennifer lives in Martinsburg, West Virginia. All the rumors you've heard about her state aren't true. When she's not hard at work writing, she spends her time reading, watching really bad zombie movies, pretending to write, and hanging out with her husband and her Jack Russell Loki.

Her dreams of becoming an author started in algebra class, where she spent most of her time writing short stories... which explains her dismal grades in math. Jennifer writes young adult paranormal, science fiction, fantasy, and contemporary romance. She is published with Spencer Hill Press, Entangled Teen and Brazen, Disney/Hyperion and Harlequin Teen. Her book Obsidian has been optioned for a major motion picture and her Covenant Series has been optioned for TV. Her young adult romantic suspense novel Don't Look Back was a 2014 nominated Best in Young Adult Fiction by YALSA.

She also writes Adult and New Adult contemporary and paranormal romance under the name J. Lynn. She is published by Entangled Brazen and HarperCollins.

♡ Hottie of The Day ♡ Arthur Callegari