Stryder by Alta Hensley and Maggie Ryan is live!

USA Today Bestselling Authors Maggie Ryan and Alta Hensley join forces again to bring you the second novel in this action-packed, romantic suspense trilogy full of bad boys and the women who love them.

Stryder Steele, along with his two brothers and father, lives by one code: Help all in need. Even if it means saving those who walk among the most sinister criminals in the world. Known as The Black Stallions, their mission is simple – provide rescue and safety to the innocents drawn into the evil depths of the underground.

Zoya Morozova has been kidnapped and ready to be sold at an underground human auction in Moscow. Being sold to the highest bidder, she has no idea her life is about to change when her new Master is the dark and mysterious... Stryder Steele.

Bad boy Stryder remembers the pain of being unable to save another but he'll put his life on the line to save this beautiful Russian farm girl. When he buys Zoya with the purpose of rescuing her, he has no idea that she may have the power to rescue him as well.

Flown to The Black Stallion Ranch, and with the help of Zoya and the knowledge of the human sex trade she has, can the Steeles put together the pieces in time to save all the innocent women who had been sold to the monsters of the underground, or will they lose to the mastermind of it all? 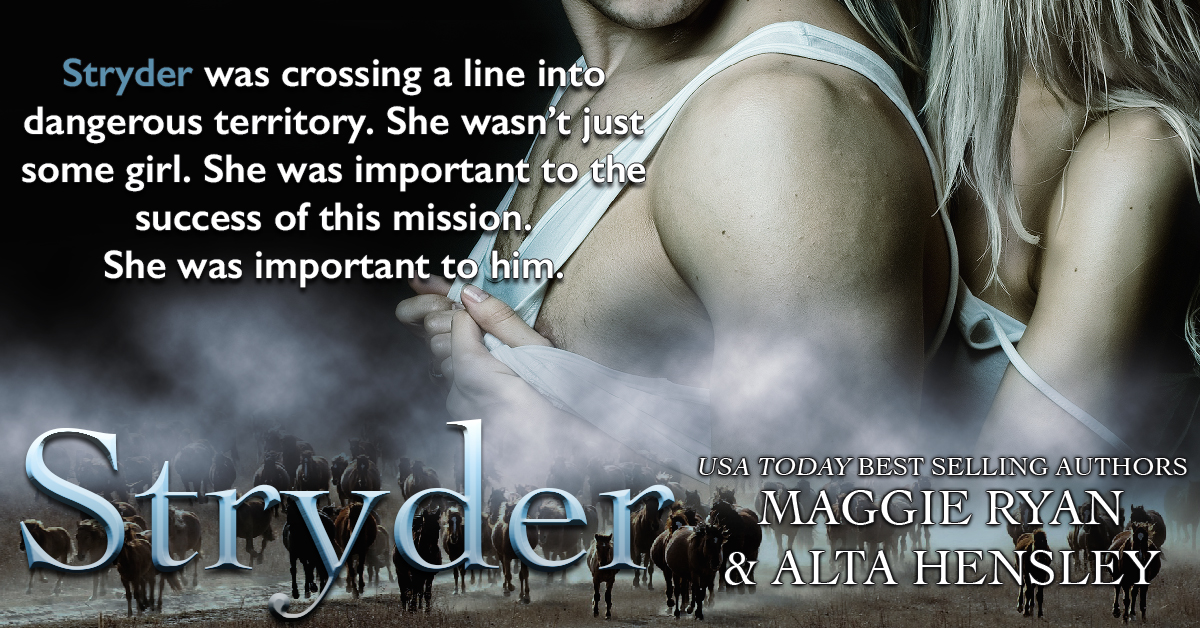 Being a multi-published author in the power exchange genre, Alta is known for her dark, gritty alpha heroes, sometimes sweet love stories, hot eroticism, and engaging tales of the constant struggle between dominance and submission.

A USA Today and #1 international best selling author, Maggie Ryan has been writing stories as long as she can remember. She enjoys writing both contemporary erotica as well as historical books set in ages past. She loves developing characters that are able to tell their own stories. Her heroines are multi-faceted women who are strong, intelligent and capable in their own right but find a deep need to share their lives with those strong, sexy and dominant alpha males that capture their hearts. Her heroes recognize the gift of submission for the gift it is, loving and protecting the women that offer that gift. She enjoys sweet, romantic stories with just a taste of domestic discipline as well as one that explore the harsher D/S lifestyle. She also enjoys writing age-play stories set both in Victorian era where women didn't have a great deal of power in their lives as well as in today's present time where women still find their happiness is greatly enhanced in offering the gift of submission. Her hope is that you settle back in your favorite chair and allow her books to entertain you and let you escape into another world.

♡ Song of The Week ♡ You're Not There by Lukas Graham

You're Not There
by
Lukas Graham

Some men are born responsible, some men have responsibility thrust upon them. Henry Charles Albert Edgar Pembrook, Prince of Wessco, just got the motherlode of all responsibility dumped in his regal lap.

He's not handling it well.

Hoping to force her grandson to rise to the occasion, Queen Lenora goes on a much-needed safari holiday — and when the Queen's away, the Prince will play. After a chance meeting with an American television producer, Henry finally makes a decision all on his own:

Welcome to Matched: Royal Edition.
A reality TV dating game show featuring twenty of the world's most beautiful blue bloods gathered in the same castle. Only one will win the diamond tiara, only one will capture the handsome prince's heart.

While Henry revels in the sexy, raunchy antics of the contestants as they fight, literally, for his affection, it's the quiet, bespectacled girl in the corner — with the voice of an angel and a body that would tempt a saint — who catches his eye.

The more Henry gets to know Sarah Mirabelle Zinnia Von Titebottum, the more enamored he becomes of her simple beauty, her strength, her kind spirit... and her naughty sense of humor.

But Rome wasn't built in a day — and irresponsible royals aren't reformed overnight.

As he endeavors to right his wrongs, old words take on whole new meanings for the dashing Prince. Words like, Duty, Honor and most of all — Love.

Sarah stands up and presses her lips against mine. And it's so unexpected, so surprising — I freeze up. But only for a moment. As her mouth gently moves over mine, I begin to thaw. She's so fucking soft, her taste so very sweet. The kiss is almost chaste — at least it's the most chaste I've ever had. Unpracticed.

And yet, it still manages to make my heart pound against my ribs like an animal in a cage.

"What are you doing?" I whisper, when she pulls back just a little.

"I'm distracting you." She looks up at me uncertainly. From behind those ridiculously prim little glasses with those big, dark eyes that could bring me to my knees. "Is it working?"

My tongue traces my lower lip, craving more of her.

She smiles quick and relieved... and then she reaches back up, wraps her arms about my neck, and kisses me.

Her two lips envelop my lower one, then the upper, all eager, pleasing sweetness. My hands find Sarah's lower back and I pull her in close, tight against me. Slowly, I open my mouth and she mirrors my movement, opening for me. And it's good. So very, very good.

It's like my blood has turned to gasoline, and the touch of her wet, warm tongue is the spark.

I delve deeper, kiss her harder — more demanding — taking the lead. I cup her head in my hands, holding her still while I plunge and devour. A moan seeps from her lips and I devour that too.

But then, breathing harshly, I tear my mouth away.

"I'm sick of being afraid, Henry. And I'm so tired of being alive... but not really living. I've wanted this for a long time. I want... you." It's only then that hesitation dims her eyes. "Do you want me too?"

I grip her arms. "More than I've wanted anything or anyone in my entire life."

She takes my hands in hers, lifts them and presses my palms to her breasts. They're soft and full and absolutely perfect.

Beneath her robe, her bedclothes are paper thin. I trace my thumbs across her nipples, feeling them harden and peak. I want to suck on them until she's mindless. I want to lick every inch of her skin and watch her flush with desire.

I wrap my arms around Sarah and lift her right off her feet. With a groan, my mouth is back to hers. Her small pretty hands cup my jaw as I carry her toward the bed. I stop against a wall on the way, knocking a frame sideways, lifting her leg in one hand and wrapping it around my hip so I can thrust against her.

There's so much I know — deviant, filthy, lovely moves. And I want to teach her every damn one.

Nicholas Arthur Frederick Edward Pembrook, Crowned Prince of Wessco, aka "His Royal Hotness", is wickedly charming, devastatingly handsome, and unabashedly arrogant — hard not to be when people are constantly bowing down to you.

Then, one snowy night in Manhattan, the prince meets a dark haired beauty who doesn't bow down. Instead, she throws a pie in his face.

Nicholas wants to find out if she tastes as good as her pie, and this heir apparent is used to getting what he wants.

Dating a prince isn't what waitress Olivia Hammond ever imagined it would be.

There's a disapproving queen, a wildly inappropriate spare heir, relentless paparazzi, and brutal public scrutiny. While they've traded in horse drawn carriages for Rolls Royces and haven't chopped anyone's head off lately — the royals are far from accepting of this commoner.

But to Olivia — Nicholas is worth it.

Nicholas grew up with the whole world watching, and now Marriage Watch is in full force. In the end, Nicholas has to decide who he is, but more importantly, who he wants to be: a King... or the man who gets to love Olivia forever. ♡ Hottie of The Day ♡ Andrew England