Down-on-her-luck teacher, Daisy Clemmens, is about to learn some hard lessons. (Not like that, you perv.)

Lesson One
No matter how broke you are, never agree to a job that includes a rabid eight-year-old, requires a tetanus shot or where your boss is a sexy (and cranky) rock 'n' roll god.

Lesson Two
Do not, do not start to have tender, gooey feelings for the sexy commitment-phobe rock 'n' roll god. You'll only get hurt.

Lesson Three
Okay so you've slept with the sexy rock 'n' roll god. But it's not too late. Just whatever you do, don't fall in love. Whoops. Too late.

Lesson Four
Never love someone, even if they are a sexy rock 'n' roll god, more than yourself.

Hard Lessons is book two in the Wild Minds series and it can be read as a standalone. This is Billy and Daisy's story and can be read before or after Good Lies.

While waiting for the perfect job opportunity, Daisy Clemmens accepts the position as Addison Wank's nanny. While she loves working with children, she wasn't prepared to meet rock god Billy Wanks, Addison's father. She knows she can't fall for him. But what happens when lines are crossed? Will Billy give Daisy all the loves she needs and his heart?

I loved Hard Lessons! The story is funny, sexy, and full of drama. Once I started reading, I couldn't stop. It took me in a rollercoaster ride of emotions and I don't regret one bit.
The chemistry between Billy and Daisy is off the charts and very palpable. And their banter? Hilarious!
I really loved getting to know more about Daisy and Addison's relationship. They are so sweet together.

Daisy Clemmens is a sassy, funny, and strong woman. She loves children and working with them. When she meets Addison, she falls immediately for her. She also falls for Billy, but knows he's afraid of commitment. Meanwhile, she's trying to find herself and her place in the world.
Billy Wanks is the epitome of rock god. He has the talent, the looks, and the attitude. He loves Addison more than anything in the world. He didn't expect falling for Daisy and he's lots of trouble letting her in.

Charlotte West did an outstanding job with Hard Lessons! Daisy and Billy's story is phenomenal and the characters are amazing! Her writing style is flawless and she can make the reader connect very easily with the story and the characters. I can't wait to read Bad Reasons!

Charlotte West writes romance about strong heroines and the sexy alpha males who love them. She lives in Washington state with her husband and very large dog (think miniature pony size). She spends way too much money on books, and way too much time reading. When she's not reading, she's feeding her reality television addiction, eating chocolate, or traveling. She's been known to eat her weight in Girl Scout cookies.

♡ Hottie of The Day ♡ Gui Inacio 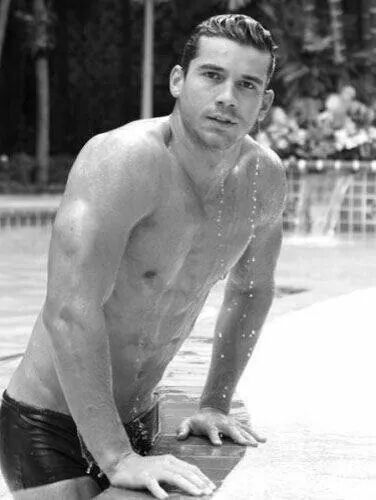