Today we have the blog tour for In Between the Earth and Sky by Heidi Hutchinson!

Check it out and be sure to grab your copy today!

In Between the Earth and Sky
by
Heidi Hutchinson

What happens when an irresistible force meets an immovable object?


Remington Rohan was not a rule follower.

Former model (though not one of the "super" kind), successful influencer and life coach. Currently paid to tell people how to achieve the best from their lives and careers. In other words, a complete contradiction to how he preferred to live — namely, on his own terms and without input from others.

Everything about his life was going according to plan.

Until he started spending way too much time with a woman who defied his prejudices and challenged his beliefs.


Lydia Larkin was not a genius.

Gifted, clever, and stubborn. Raised on star maps and Hendrix, she was born an explorer. Temporarily tied down to a private sector science job, she knew she was biding her time before she was off to discover and build something new.

Not one to let society tell her who she was, she wasn't about to let a professional influencer tell her she had to change to be happy.


Buckle up and brace for impact.

Yes, he was a former Marine sniper.

And a successful entrepreneur.

A highly sought after business strategist.

A public speaker, life coach, and self-help guru with a wave of followers who believed he was God's gift.

And Lydia was probably the only person in the world who disliked him.

But she suspected the feeling was mutual.

"I had forgotten about you to be honest," she said, still not looking right at him.

It made her feel like a chicken shit, but he was insanely attractive. And her brain had always loved beautiful things. So instead of turning into a swoony fangirl (like she'd seen so many level-headed and highly educated scientists she respected in the building do around him), she kept her eyes on her work. Or looked at his chest if she needed to address him directly.

It also helped to picture him as Hans Gruber from Die Hard.

Handsome and charming, but ultimately the bad guy.

Remington helped himself to a dark chocolate candy from the dish on her desk. She ground her teeth together a little more than necessary.

"Can I help you with something?" she asked, forcing herself to be polite.

The way he drew his sentence out had her bracing.

"I would love to help you with that." His words dripped with innuendo.

Her eyes narrowed and she made the mistake of looking at his face. He met her gaze with a relaxed and crooked smile. Those brown eyes alive with mischief and amusement.

He fucking loved to mess with her. Merrick had told her time and again to stop rising to the bait. To let it go and ignore him.

"Gross," she said flatly, blinking once.

His smirk twitched as he tisked. "That's so inappropriate. You know I was talking about a nutritional cleanse." He made a show of looking around her desk. "I've left you some information before."

Yes, he fucking had.

He even mailed them to her while he was out of town.

"Still peddling your pyramid scheme, huh?" she asked, going back to her computer and opening the email app.

"It's not a pyramid scheme," he responded tightly.

She sensed rather than saw him straighten his spine.

"Whatever you need to tell yourself to help you sleep at night, Charles Ponzi."

Before he could fire back, the double doors opened and Merrick ushered him in. "Rem, good, right on time. Miss Larkin, please hold my calls."

Remington hesitated in front of her desk until she finally raised her eyes to his. His mouth was a flat line, all amusement gone and the lines around his eyes deepened with his stare.

He knocked once on her desk as he tilted his head and ran his tongue over his teeth. "You know, this internship is doing good things for you. In a couple years, I think you'll be ready for real employment."

Lydia sucked in a breath as he turned around and flashed a smile at Merrick.

He was such a dick.

Heidi Hutchinson was born in South Dakota and raised the exact right distance away from the Black Hills. She had an overactive imagination very early on, and wasted no time in getting most of her friends in trouble due to her unrealistic and completely ridiculous ideas. Seeing as she was so lazy and also afraid people would think she was bonkers, she didn't write down any of the story lines that played out in her daydreams.

During her high school years, she took pen to paper and filled more notebooks than she is proud of with angsty, depressing, self-deprecating poetry. This led to her writing down more things: notes, ideas, character bios, plot twists that had no plot yet to twist. After years of cleaning up her own scraps of imagination with nothing solid to hold on to, she sat down and wrote the story that had been in her head the longest. Fueled by coffee and her unwavering and perfectly normal devotion to Dave Grohl, she discovered a writer living inside of her.

She still lives in the Midwest, though not as close to the Black Hills as she would prefer, with her alarmingly handsome husband and their fearless child. They eat more pizza than God intended and she listens to her music the same way she lives: loudly.

♡ Song of The Week ♡ Beautiful Trauma by P!nk Only the good die young. But I've never been good.

I've lived a life most people only dream about. Famous men, expensive booze, and the finest drugs money could buy. But every vice has its price, and living a life of excess has finally dragged me down, forcing me back to the one place I swore I'd never return.

We met in high school, but we were far from sweethearts. I ruined his life and then walked away. Losing everything is bad enough, but crawling back to people who wish you were dead is a nightmare.

Not always. You either forgive and forget, or fracture and finish.

Seven years ago, Shiloh West was my world. I gave up my future for her. Then, I spent every waking moment hating her for it. I've followed her train wreck of a career in the tabloids since she drove out of town with her nose in the air. The woman is toxic.

The fact that a judge has court ordered her back to town means nothing to me — except maybe the payback I've waited a lifetime to collect. I'm going to build her up and tear her down.

A better man would walk away. I'm not a better man. She thinks she has the upper hand. Think again, Starshine.

Beauty is only skin deep, but revenge goes straight to the bone. 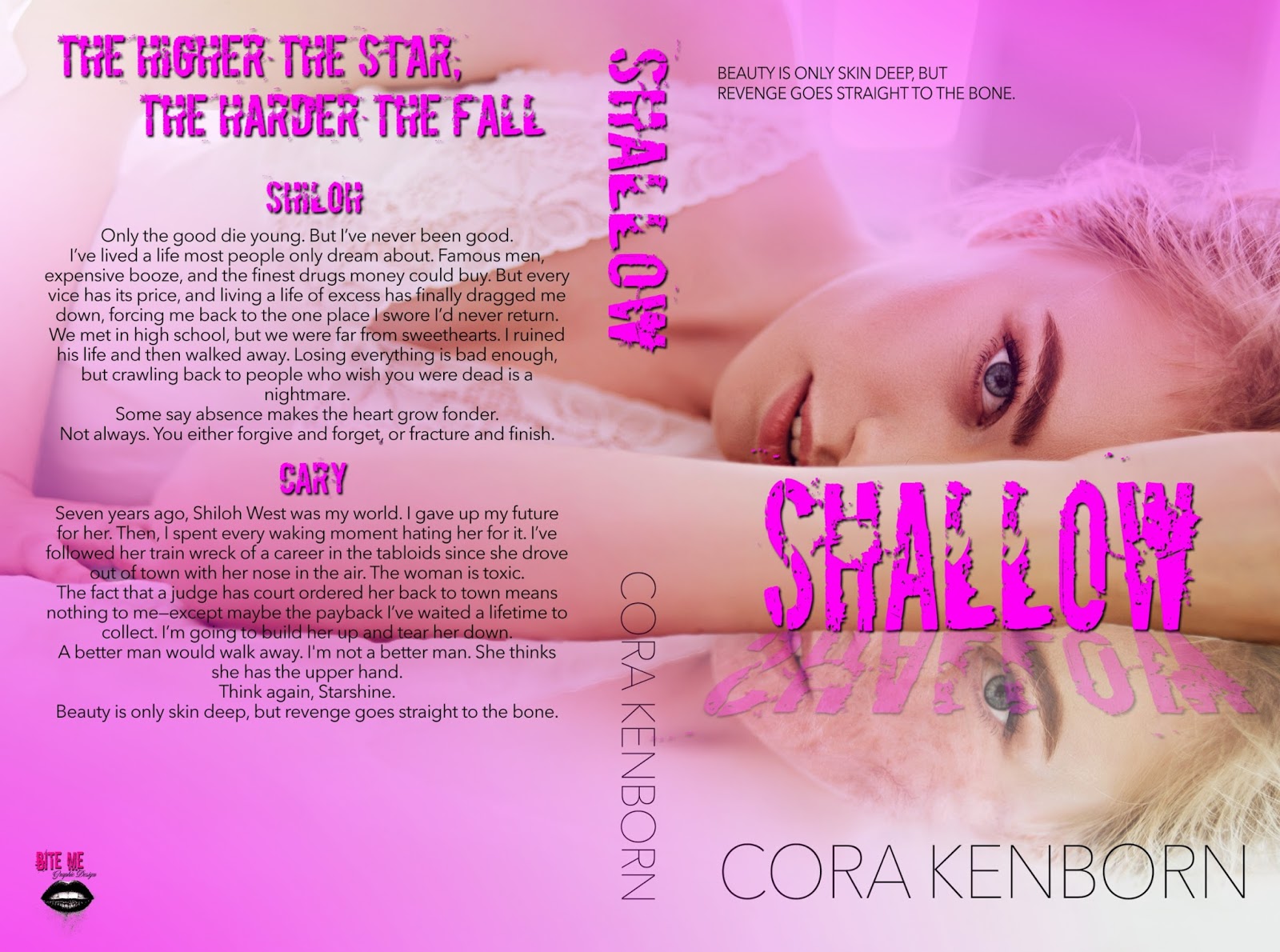 "No." She lifts her heavy lashes, tears pooling in her eyes. "You've seen me at my worst, and you could've ended me right then. Anyone else would've, but you didn't. You don't scare me, Cary. You've seen the ugly, yet you're still here." Raising the back of her hand, she swipes it along her forehead and chuckles. "I'm not sure if that makes you a saint or really stupid."

"I'm no saint, Shiloh. I'm not the boy you kicked around in high school. That boy died when you..." My voice trails off, and I shake my head, refusing to rehash the past right now. "Anyway, I'm just a guy trying to make the best of a bad situation. You have to be here, and I have to deal with you being here. Being dicks to each other isn't going to make the next three years pleasant for either of us."

"Agreed, but I still don't understand why you did all of this." She motions around the empty arena. "You say you're no saint, but, I'm no angel either. So, where does that leave us?"

I've asked myself the same question at least a dozen times since bringing her here. I can't forgive her for what she did to me. The hate I've carried with me is too deeply imprinted to forgive and forget. However, the twisted need I have to play with her emotions makes me no better than her.

So, if we're both demented as hell, then her question is valid. Where does that leave us?

But why does it have to leave us anywhere? We are who we are and not a damn thing is going to change that. Both of us have done some fucked up shit that's caused pain and suffering. Maybe for one day we can block out the world and pretend we don't hate each other.

"Even sinners and fallen angels take a break from anarchy, Shiloh. All work and no play makes us very dull criminals."

I skate a step, or maybe it's four or five. Hell, I don't know. I'm too enthralled with the fiery look on her face to notice that she's pressed right up against me, chest to chest, and stomach to stomach. The frigid air in the arena heats, and the minute I tip her head back, I know I should stop this, but I won't. I can't.

"Ask me again," I whisper, the cold air clouding around my breath.

Her chin trembles in my hand. "Why did you go to all this trouble for me?"

"I went through seven years of detox, Shiloh. But one goddamn hit of you in a bathroom and I'm a junkie again. You make me crave more. It's never enough." 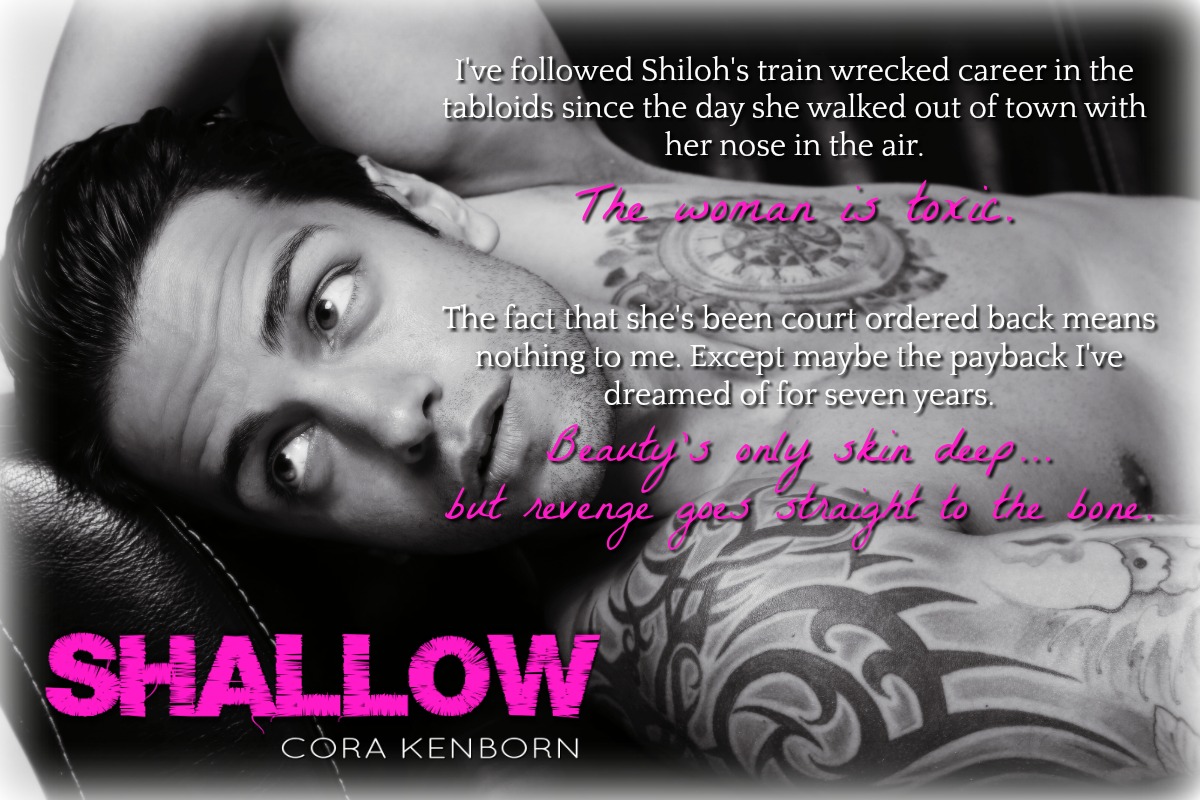 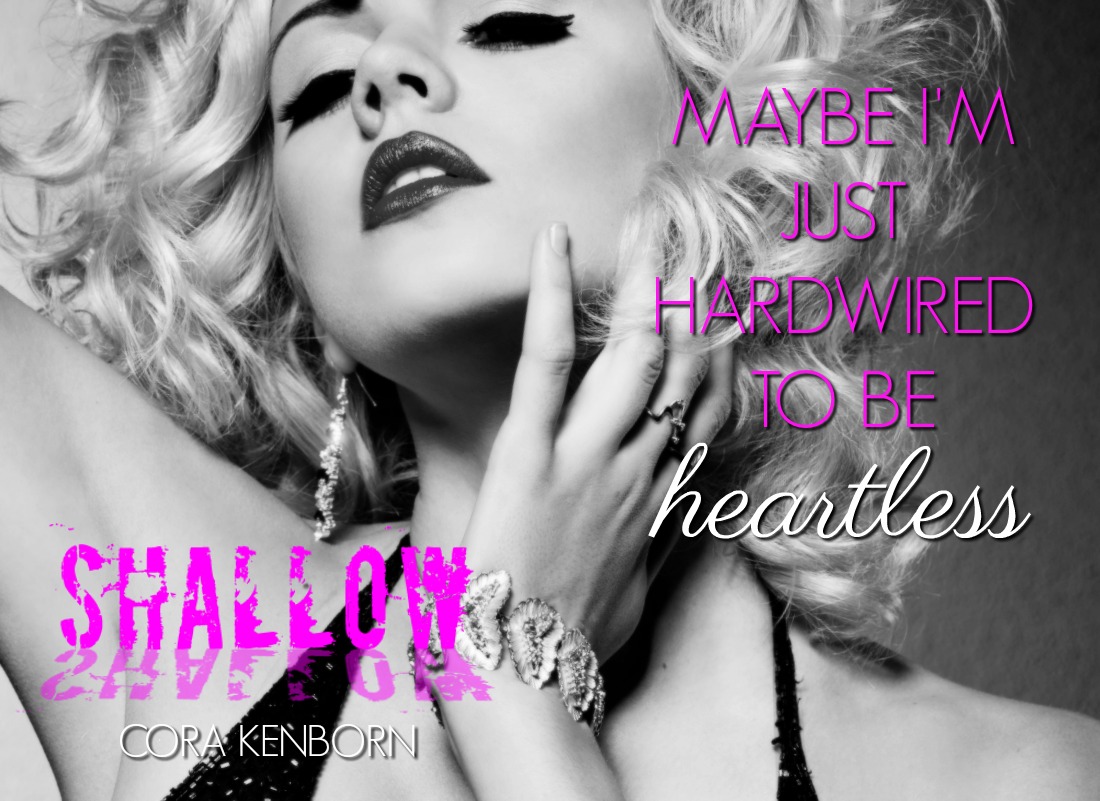 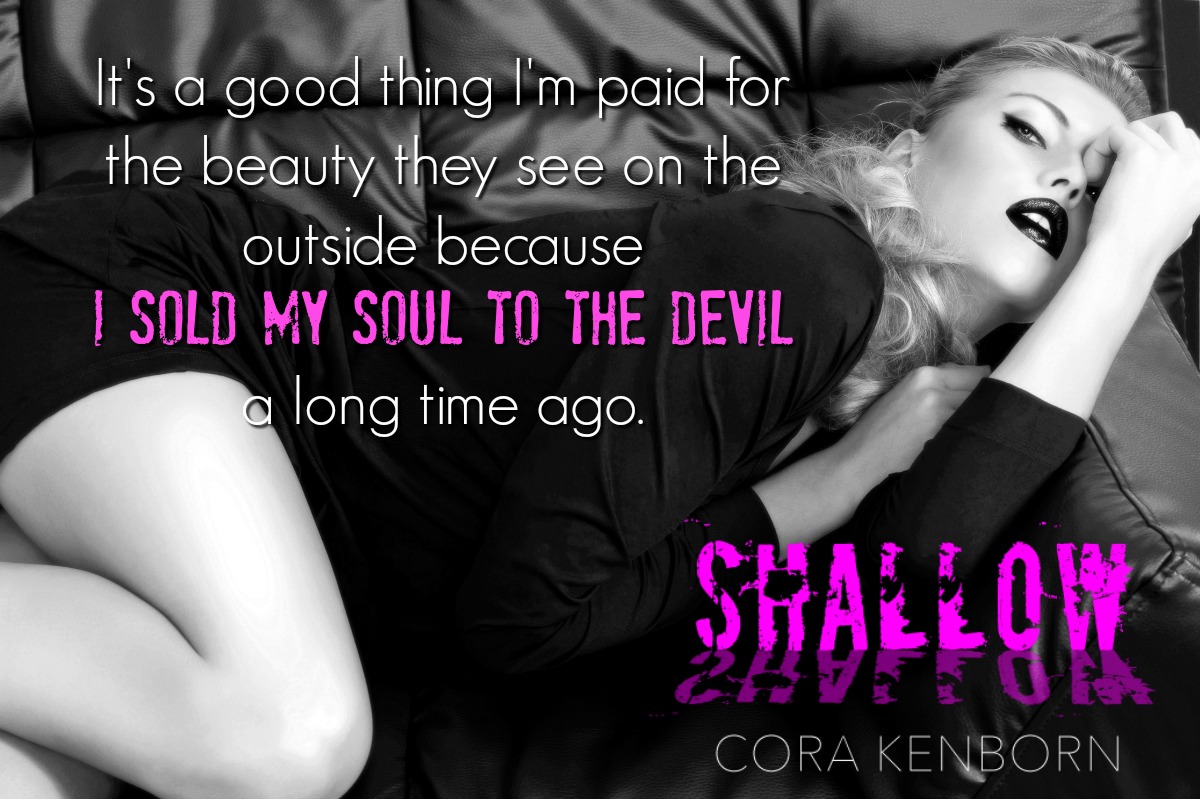 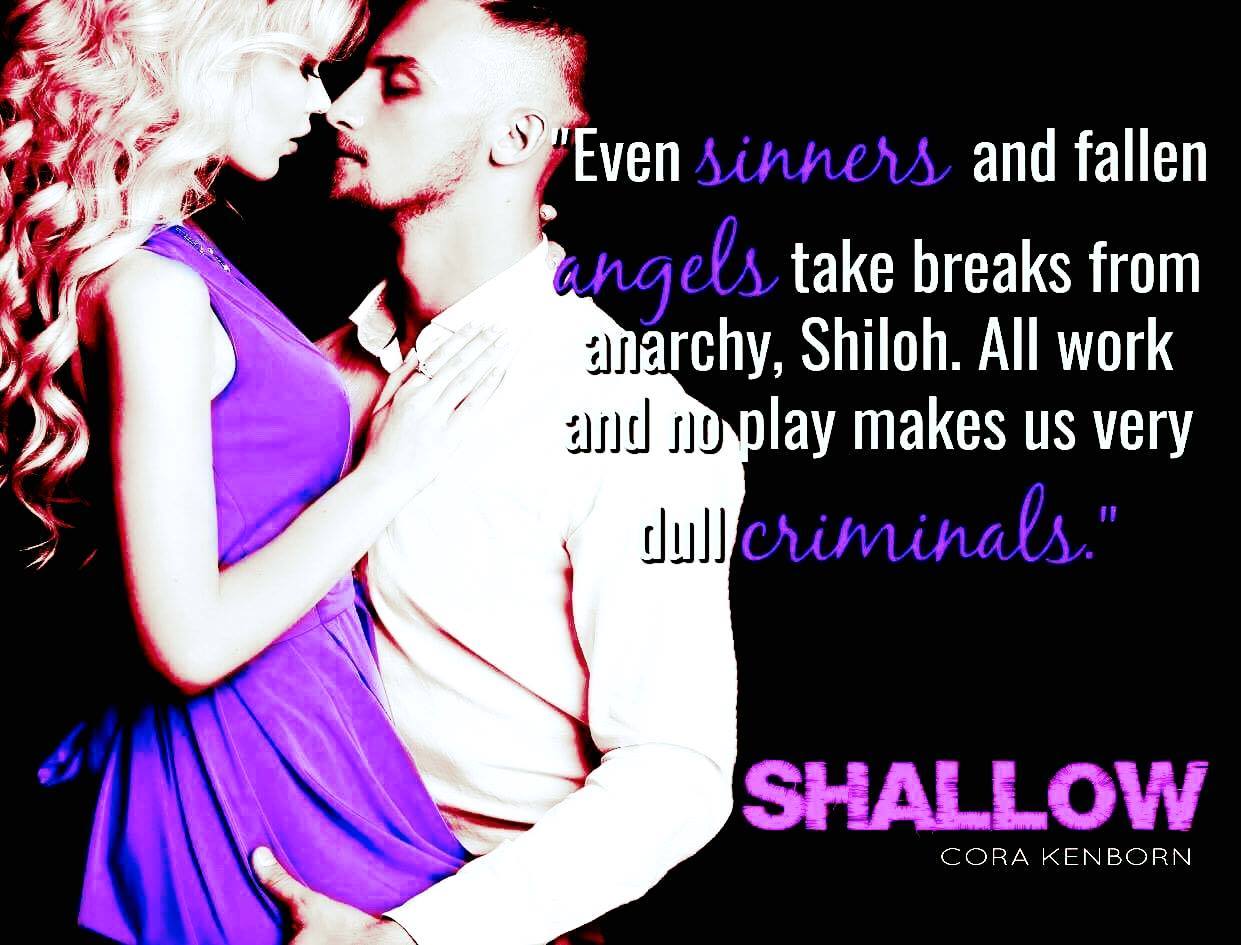 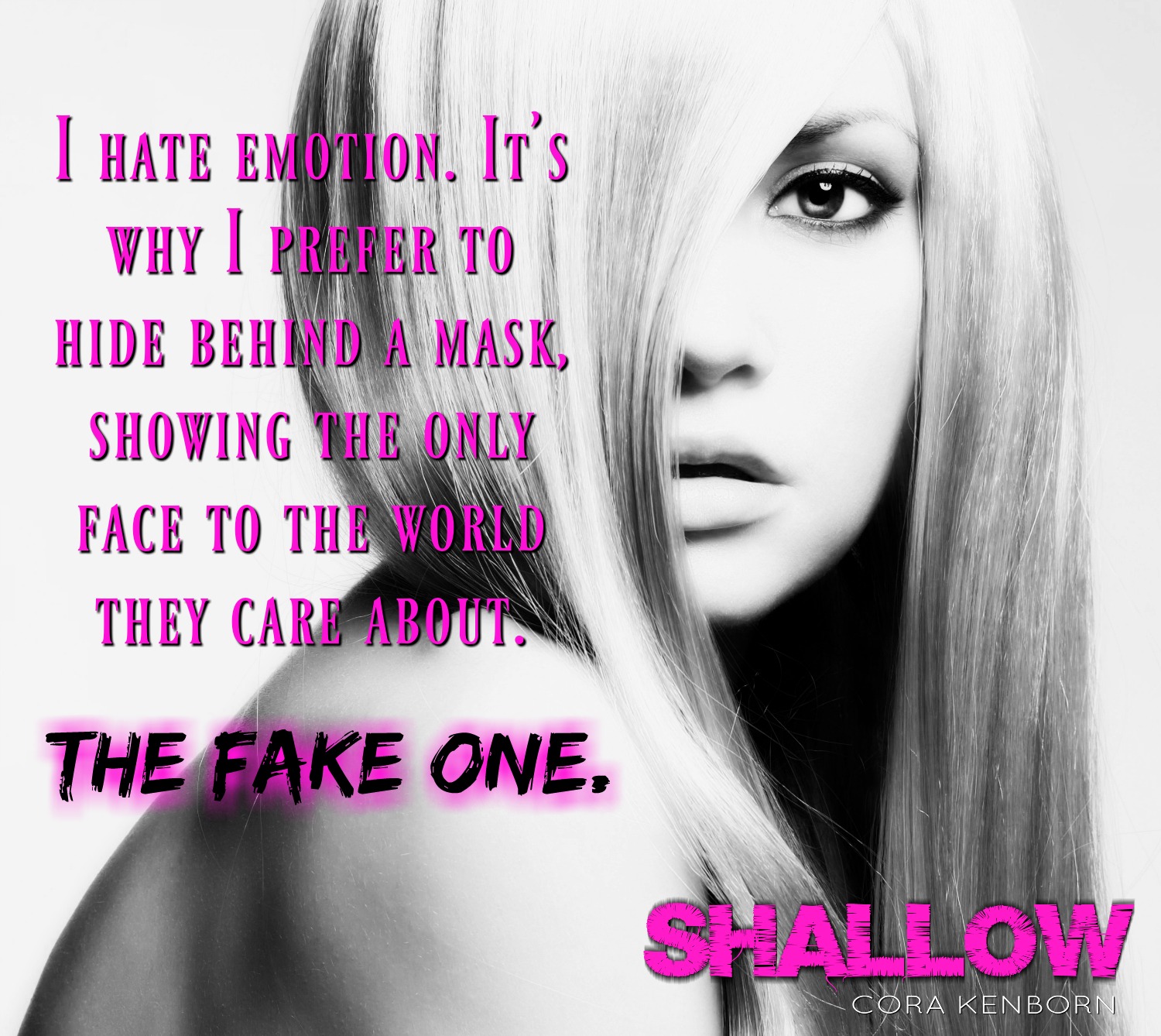 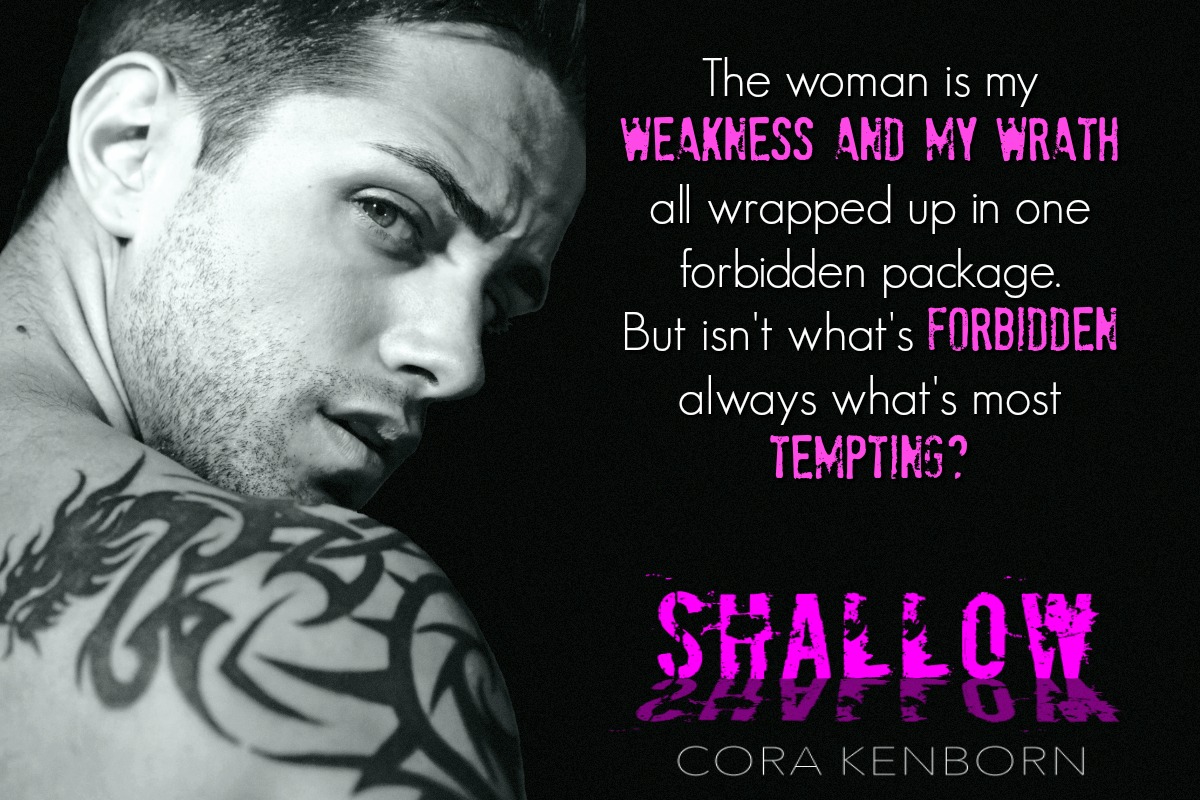 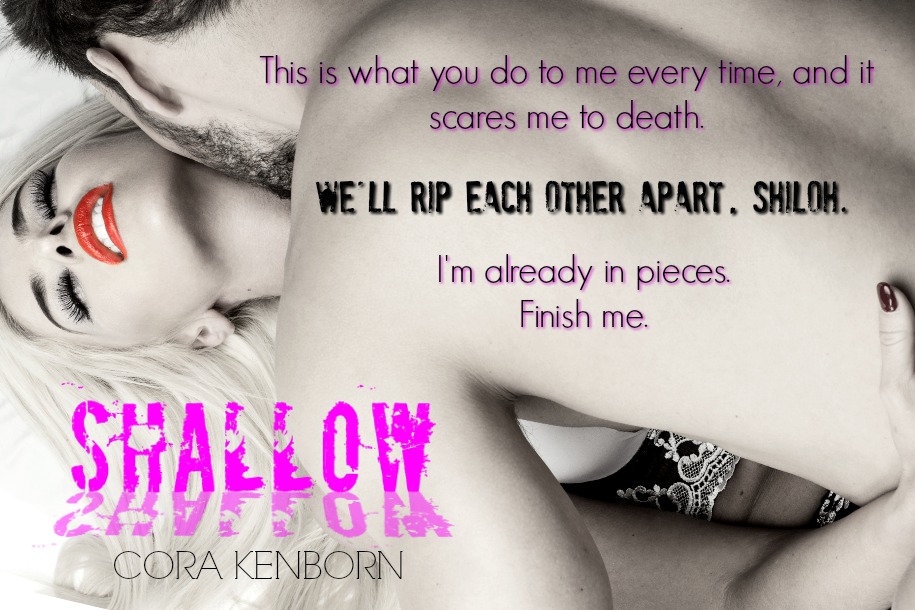 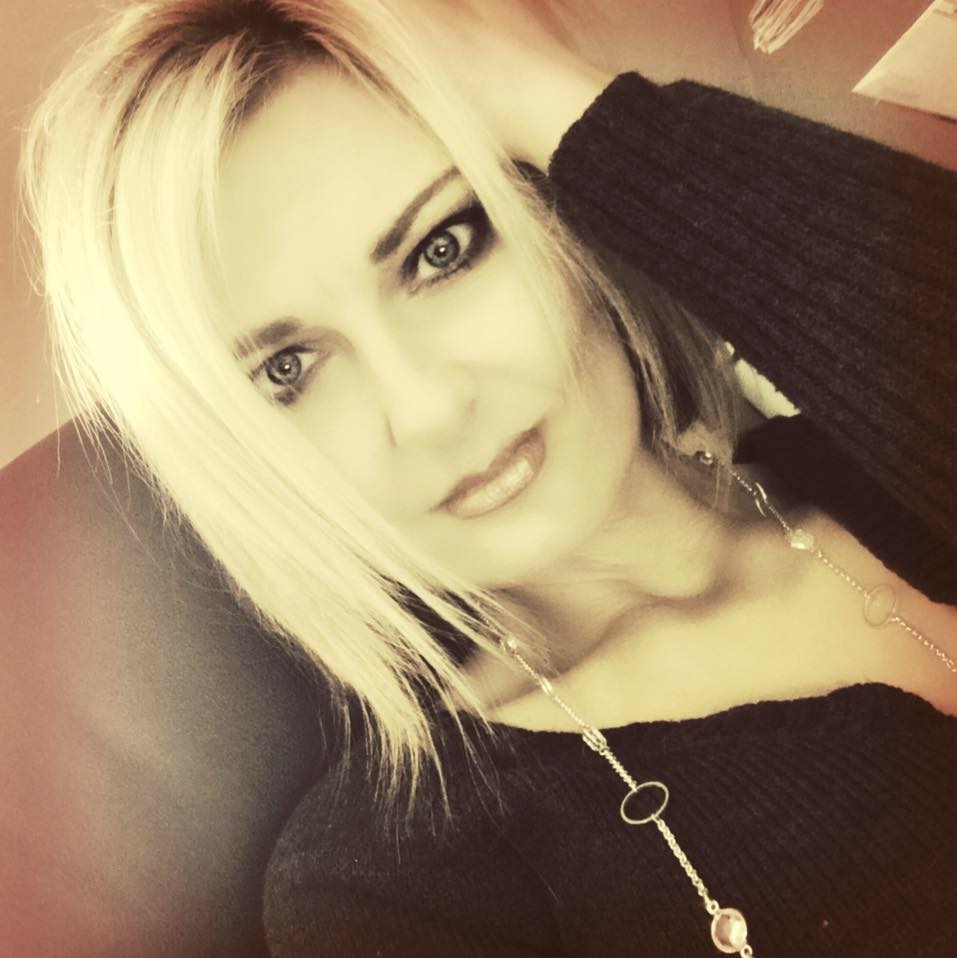 A true Southern girl from Eastern North Carolina, Cora grew up on sweet tea and front porches, and knows the real meaning of "bless your heart". She's the mother of three hyperactive and occasionally adorable children and the wife to a husband who she's conned into believing Hot Pockets are a perfectly acceptable family dinner.

Cora can usually be found taking notes during true crime shows, effectively freaking out everyone in the room. She proudly admits to being a domestic rebel and plans to pen future self-help books including: "Microwave Dinners For Dummies", "Allergic To Laundry and Other Common Household Dangers", and "When Hot Glue Guns Attack: A Mother's Nightmare".

Oh, and she and autocorrect are mortal enemies.

♡ Hottie of The Day ♡ Darrell Holloman 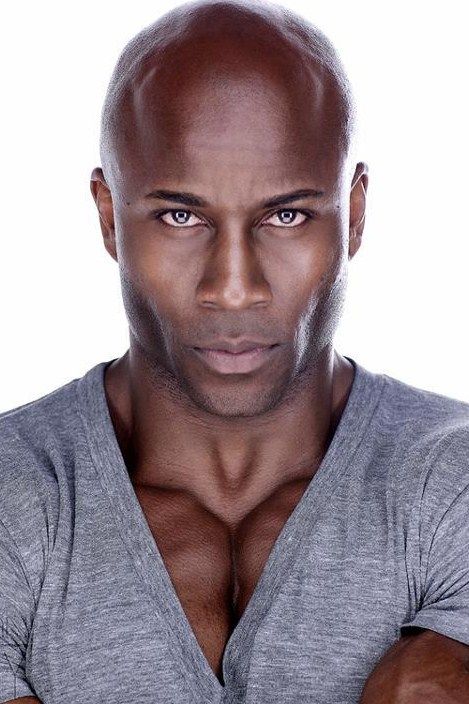