Royally Yours
Royally #4
by
Emma Chase 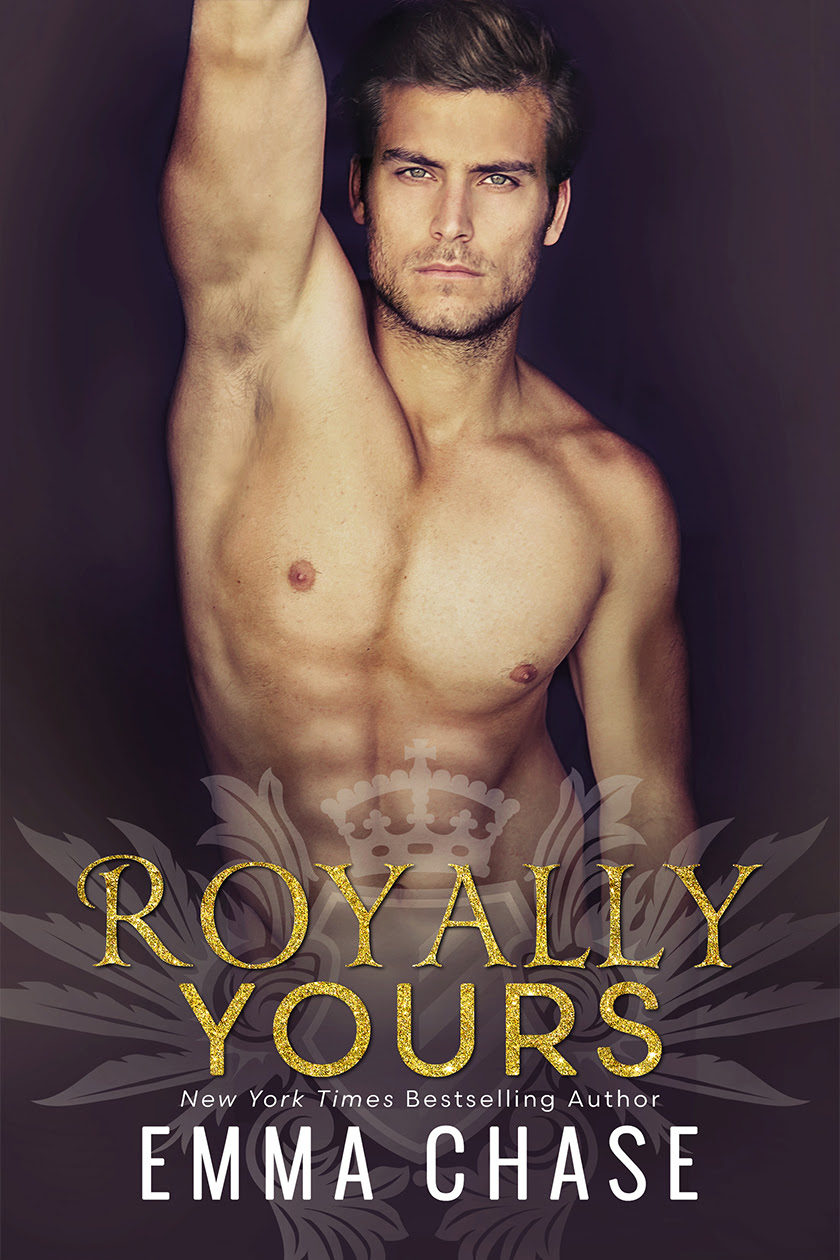 Princess Lenora Celeste Beatrice Arabella Pembrook had an unusual childhood. She was raised to be a Queen — the first Queen of Wessco.

When she's crowned at just nineteen, the beautiful young monarch is prepared to rule. She's charming, clever, confident and cunning.

It's her advising council's first priority. It's what Parliament is demanding, and what her people want.

Lenora has no desire to tie herself to a man — particularly one who only wants her for her crown. But compromises must be made and royals must do their duty.

Even Queens. Especially them.

Years ago, Edward Langdon Richard Dorian Rourke, walked away from his title and country. Now he's an adventurer — climbing mountains, exploring jungles, going wherever he wants, when he wants — until family devotion brings him home.

And a sacred promise keeps him there.

To Edward, the haughty, guarded little Queen is intriguing, infuriating... and utterly captivating. Wanting her just might drive him mad — or become his greatest adventure.

Within the cold, stone walls of the royal palace — mistrust threatens, wills clash, and an undeniable, passionate love will change the future of the monarchy forever.

Every dynasty has a beginning. Every legend starts with a story. 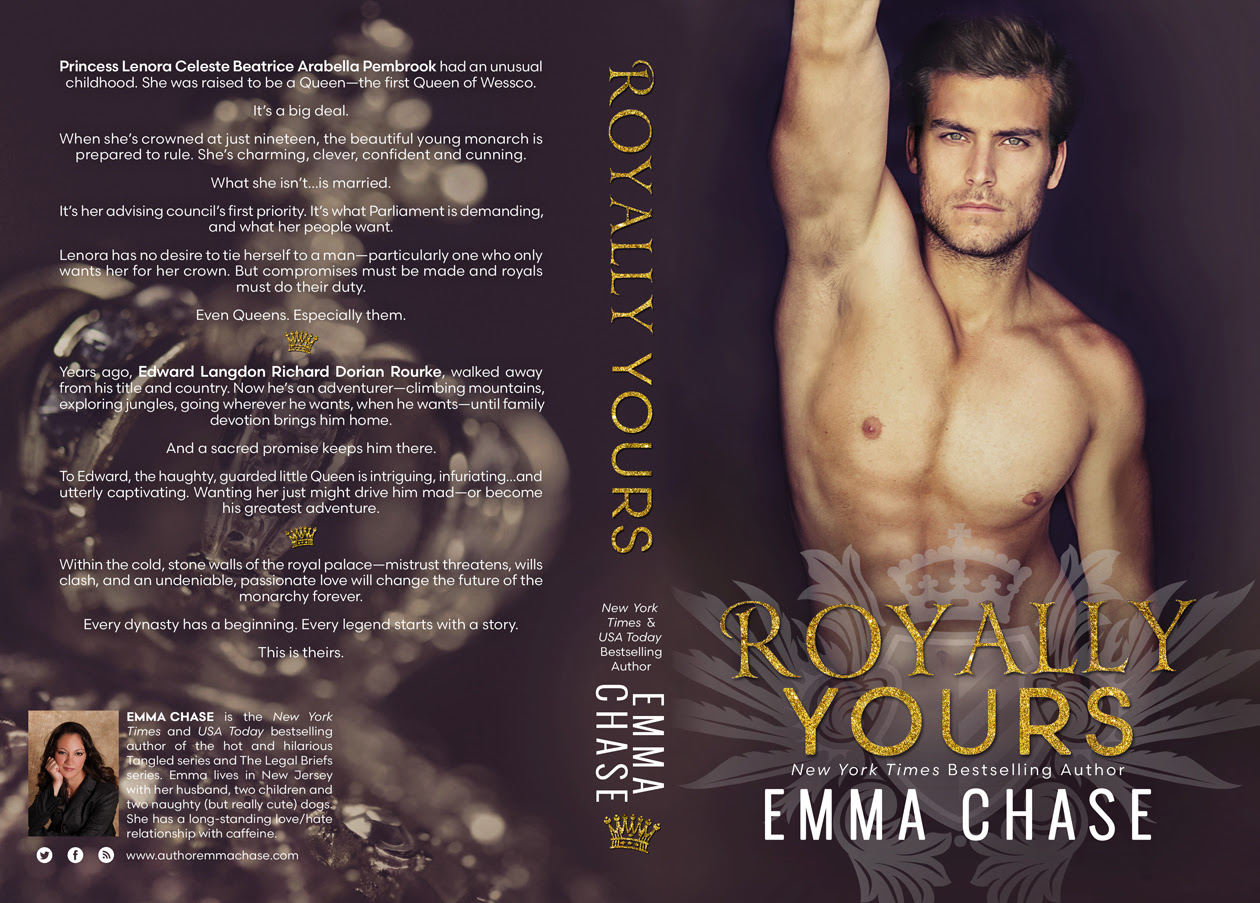 Emma Chase takes us back in time with Queen Lenora's story. And what a journey! Lenora became queen at nineteen and with the title came lots of responsibilities and duties, including getting married, even if it's with someone who doesn't love her. But everything changes when she meets Edward. Can they have their own fairytale? Or will the cold life of the palace destroy their chances?

Prepare yourself for an emotional journey! Royally Yours will make you cry and laugh a lot. There are so many twists, surprises and heartbreak, but also hope, love and friendship. I loved the banter between Lenora and Edward and their connection.

Lenora is a confident and fierce young woman, but she's also very sensitive and wants to be loved and cherished. She's been through a lot, but she remains strong. I loved watching her grow and mature.
Edward is an adventurer and he thought he had escaped the confines of his country and title. But now he's back home and never expected to meet the young queen. He's very sweet, kind and patient. He made me swoon a lot.

If you're looking for a sexy historical romance to make you swoon, cry and laugh, look no further. Royally Yours is the book for you! 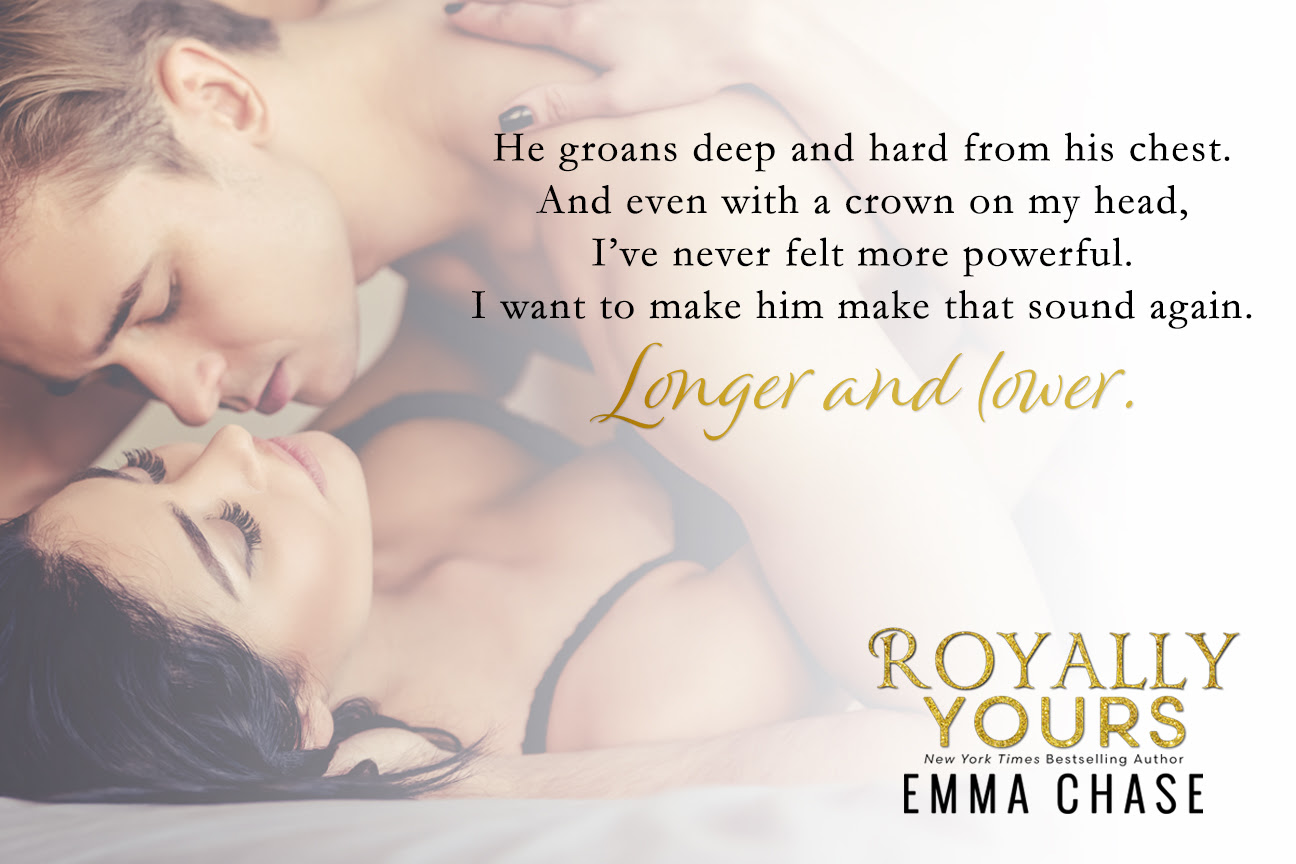 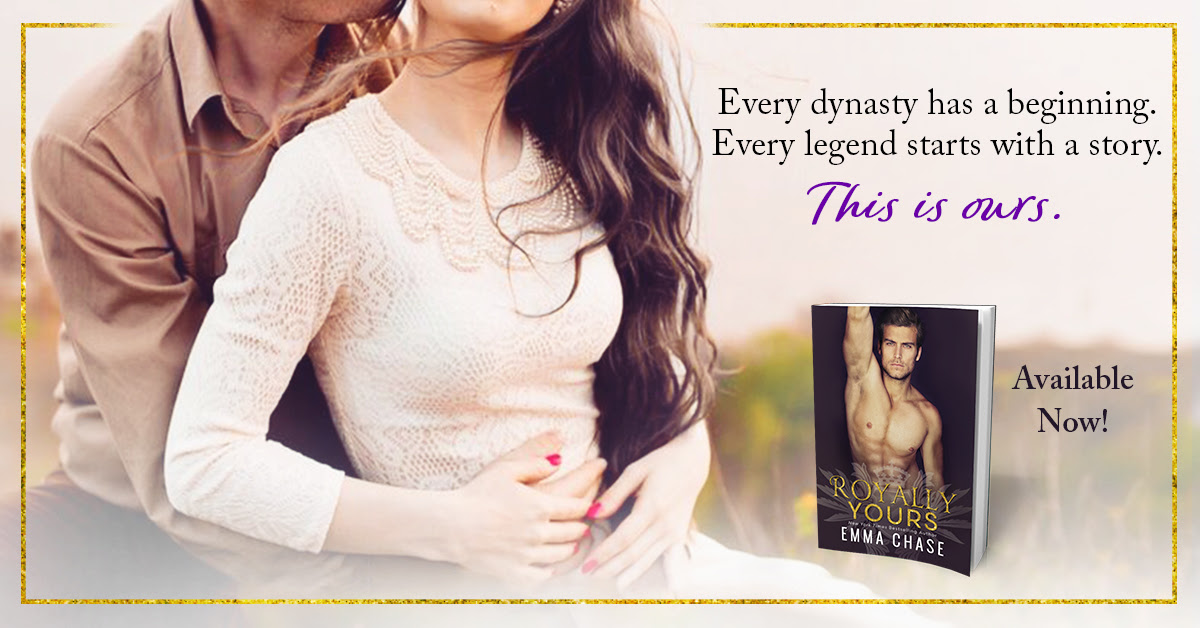 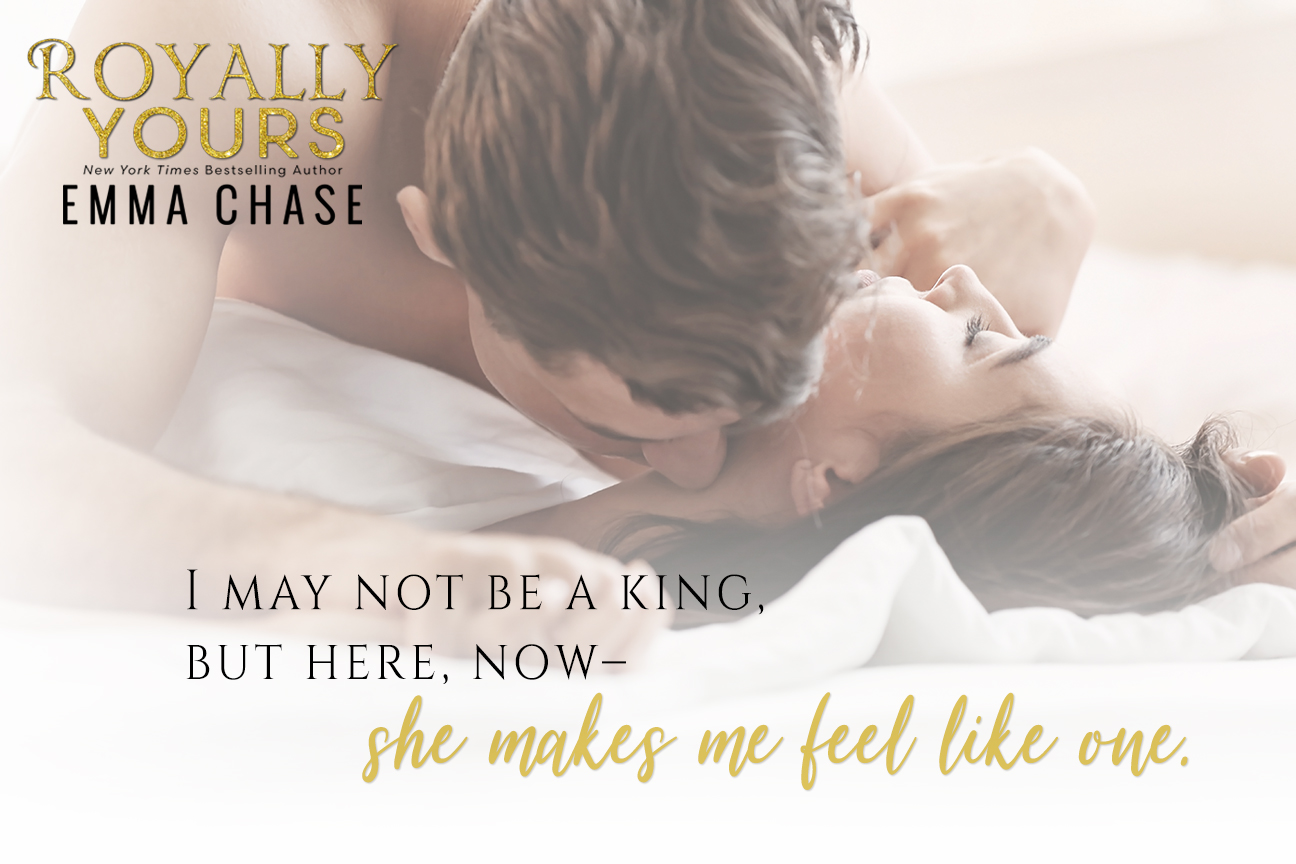 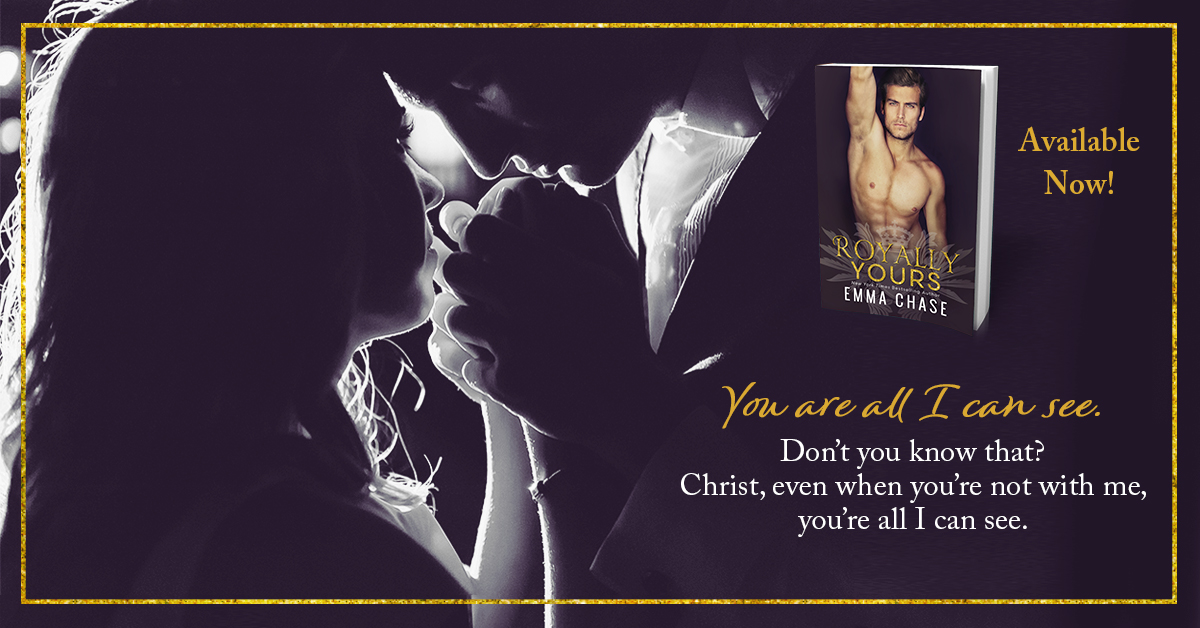 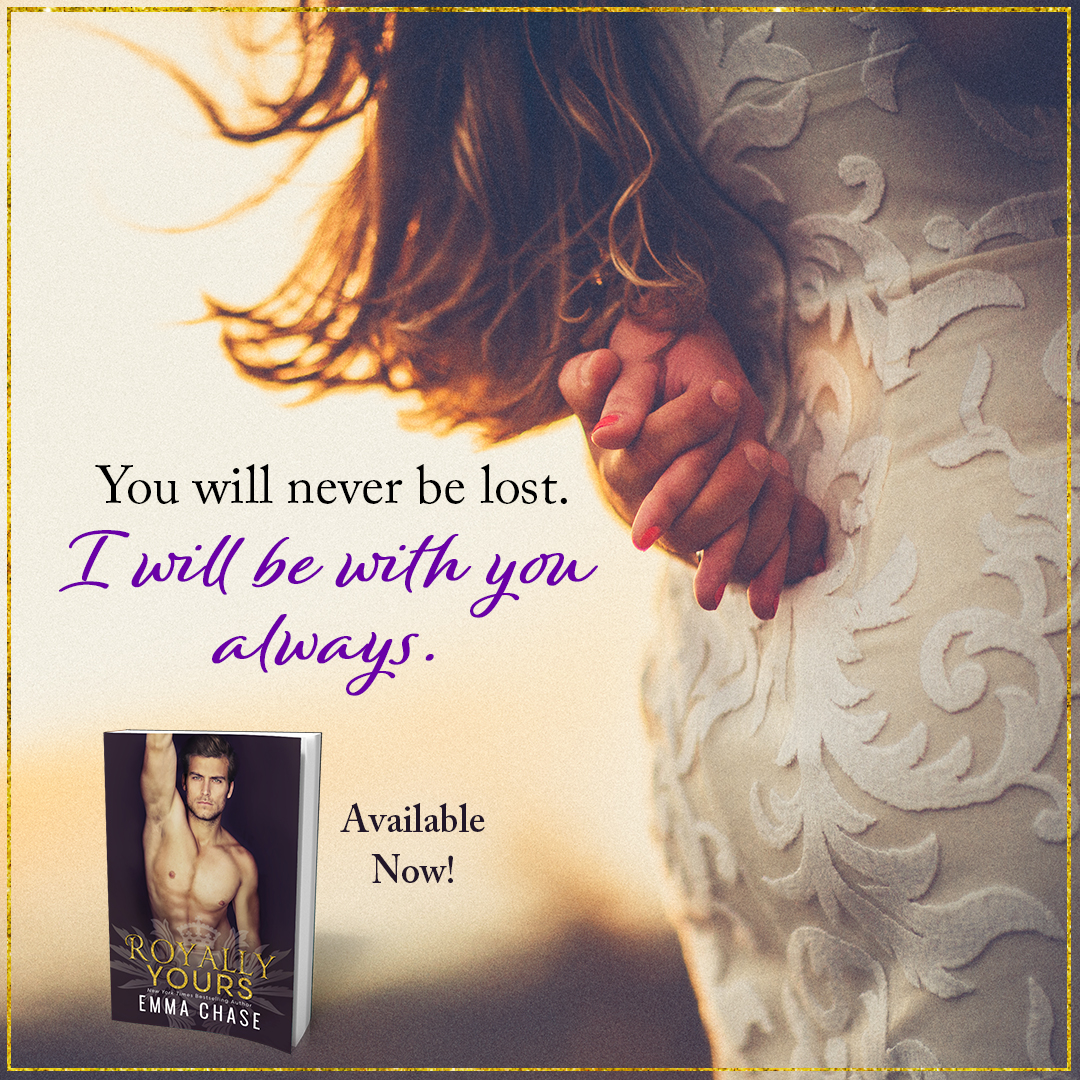 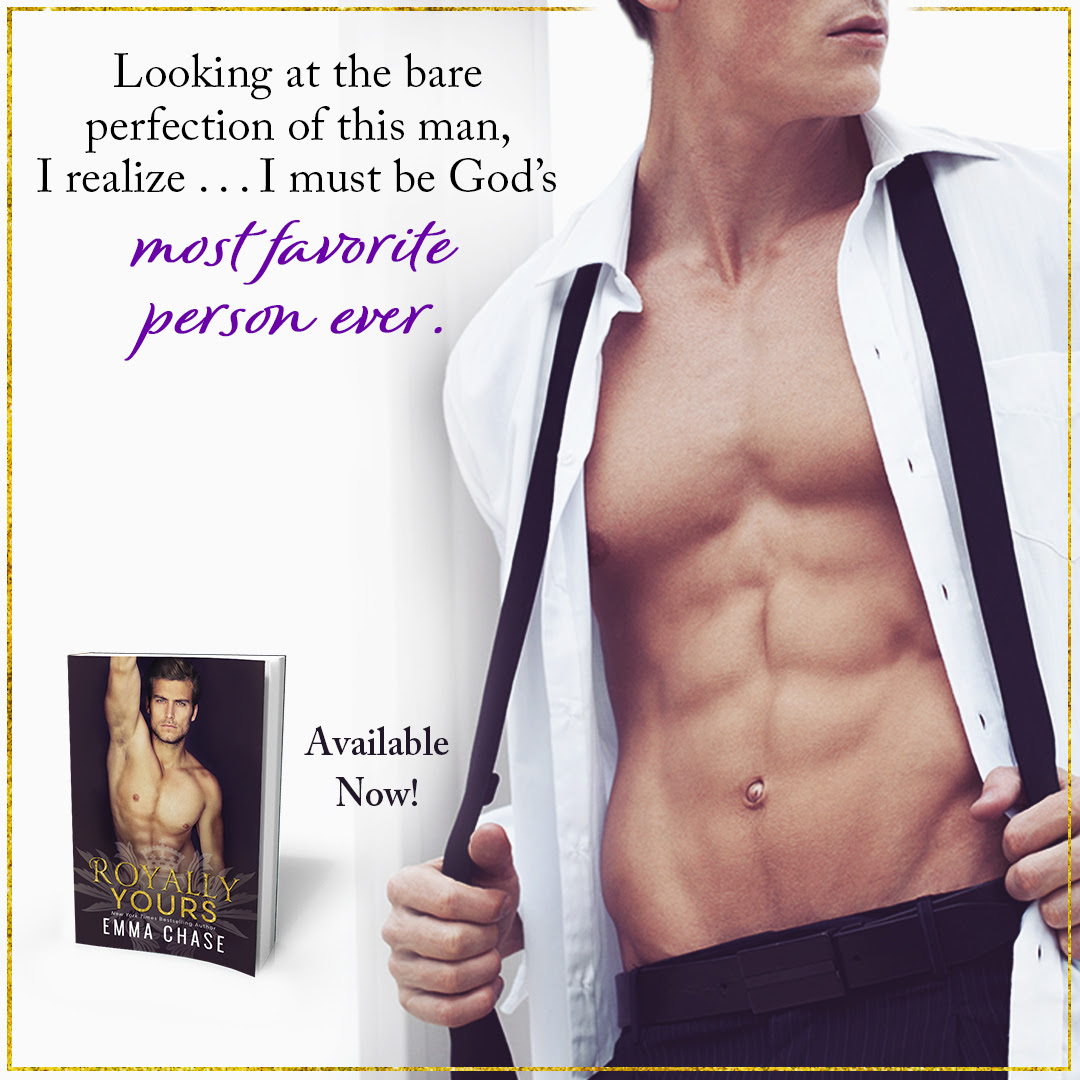 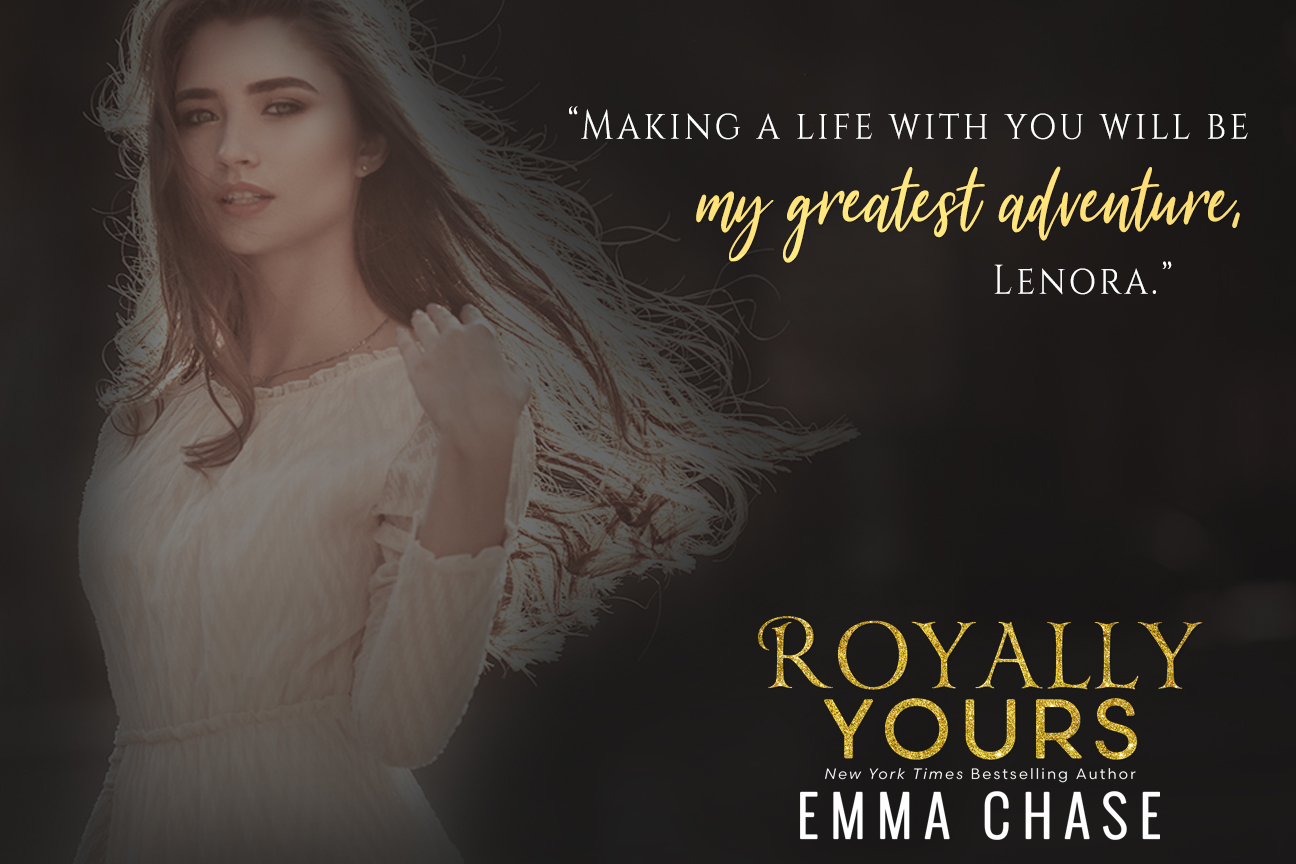 We are thrilled to bring you the cover for FINDING ALEXEI from New York Times bestselling author Kendall Ryan releasing on JANUARY 7th! 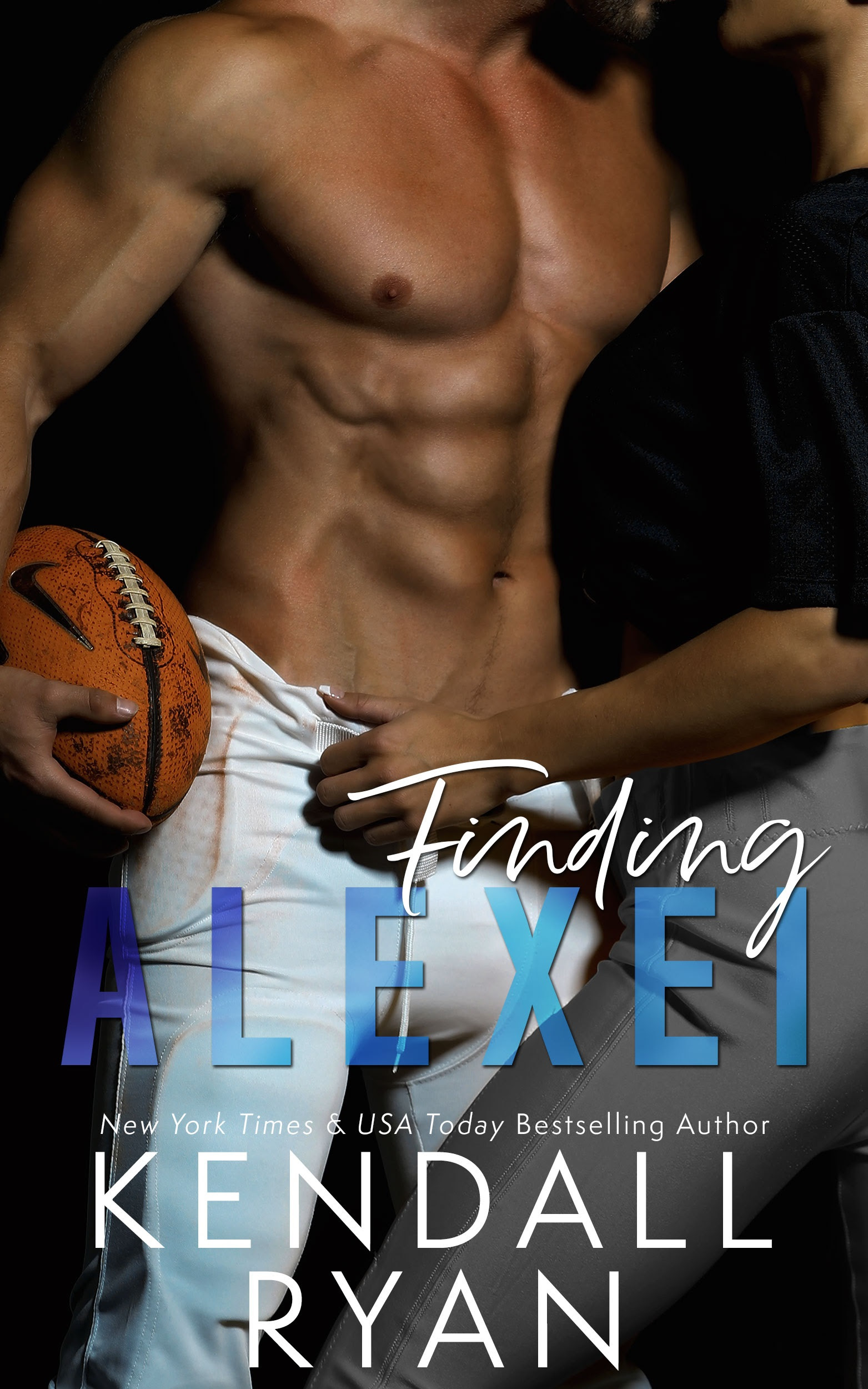 Spotting a hooker on a city street corner is not an abnormal thing.

Me bringing one home? Well, that's a first.

But this girl... She's in trouble.

And this asshole is not a guy she wants to go home with.

So I do the exact thing I shouldn't — I offer to bring her home with me instead.
She says this is the first time she's ever done this, which is adorably ironic.

Then proceeds to tell me a sob story about needing money to care for the baby who was left on her doorstep. That's when my stomach starts to clench. I think she might be telling the truth.

So I do what any respectable man would do — I take her home, stopping to pick up diapers and formula on the way — and discover that she was telling the truth all along.

Christ on a cracker.

I should have just kept walking.

I should have done a thousand other things except for barge into her sad life, offer to fix everything, fall for her... 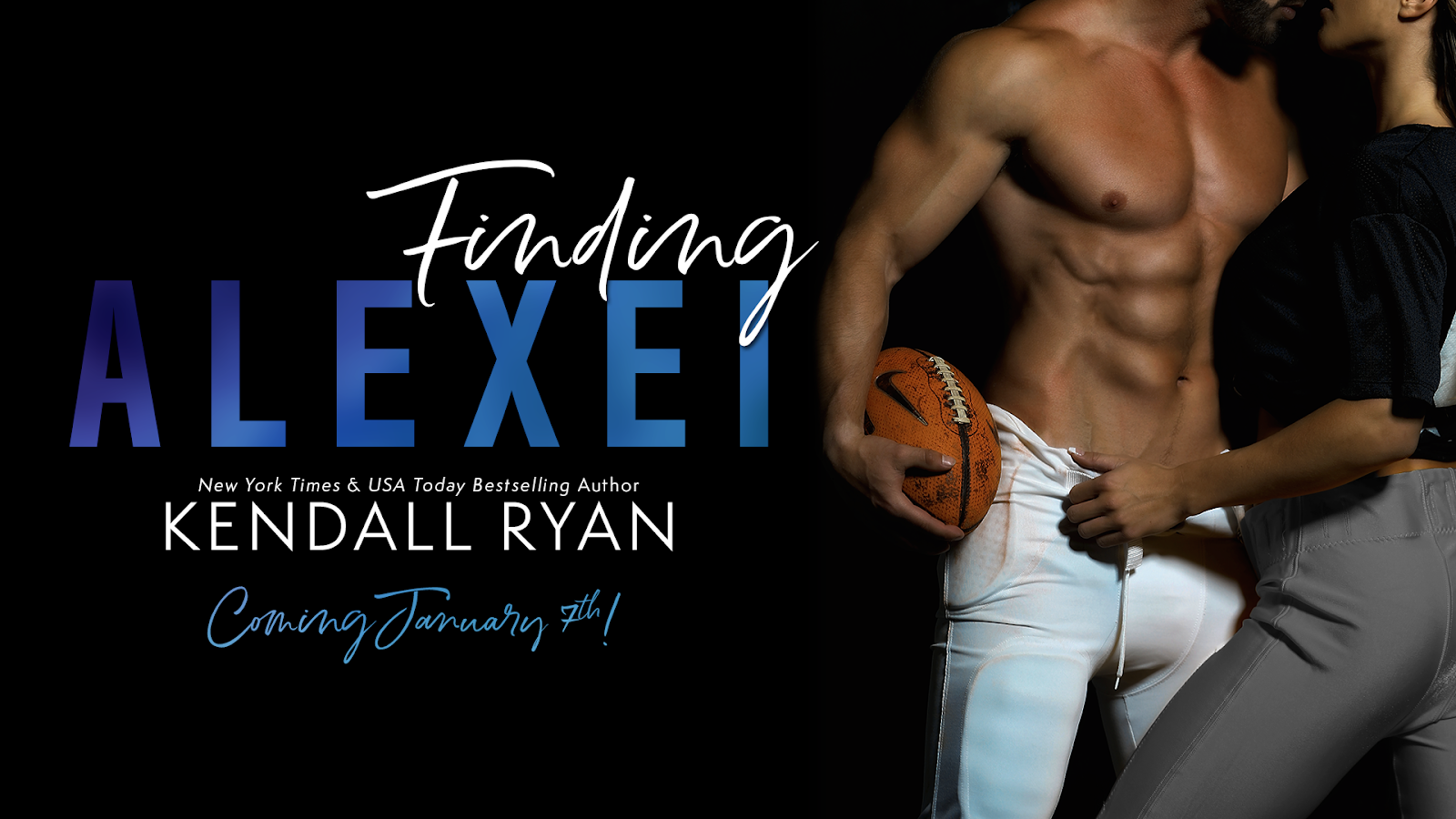 It all started with a mysterious blue note sewn into a wedding dress.

I'd gone to sell my own unworn bridal gown at a vintage clothing store. That's when I found another bride's "something old".

Stitched into the lining of a fabulously feathered design was the loveliest message I'd ever read: Thank you for making all of my dreams come true.

The name embossed on the blue stationery: Reed Eastwood, obviously the most romantic man who ever lived. I also discovered he's the most gorgeous. If only my true-love fantasies had stopped there. Because I've since found out something else about Mr. Starry-Eyed.

He's arrogant, cynical, and demanding. I should know. Thanks to a twist of fate, he’s my new boss. But that's not going to stop me from discovering the story behind his last love letter. A love letter that did not result in a happily ever after.

But that story is nothing compared to the one unfolding between us. It's getting hotter, sweeter, and more surprising than anything I could have imagined.

But I have no idea how this one is going to end...

Please note: Because Hate Notes is published by Montlake Romance, a division of Amazon, the ebook and paperback will only be available on Amazon. If you are an Amazon Prime or Kindle Unlimted member, you should NOT pre-order the eBook. The Hate Notes ebook will be free for both Prime and KU members on release day!

Grabbing my laptop, I searched my history and called up the last website I'd visited.

Eastwood Properties is one of the largest independent brokerage firms in the world. We connect the most prestigious and exclusive properties with qualified buyers, assuring the utmost privacy for both parties. Whether you're in the market for a luxury New York City penthouse with a view of the park, a waterfront Hampton estate, or an enchanting chateau escape in the mountains, or you’re ready for your own private island, Eastwood is where your dreams begin.

There was a link to search properties, so I typed in the name of the place the woman had mentioned in the voice mail: Millennium Tower. Sure enough, the penthouse popped up for sale. For only twelve million dollars, I could own an apartment on Columbus Avenue with sweeping views of Central Park. Let me write you a check.

After drooling through a video and two dozen photos, I clicked on the button to make an appointment to view the property. An application popped up, the top of which read: For the privacy and safety of our sellers, all prospective buyers are required to complete an application to view properties. Only buyers that meet our stringent prequalification criteria will be contacted.

I snorted. Great prequalification criteria you have there, Eastwood. I wasn't sure I had enough money to take the train uptown to get to that swanky place, much less buy it. God knows what I'd written that had qualified me.

I closed the website and was just about to shut my laptop and go back to bed again when I decided to take one more peek at Mr. Romantic on Facebook.

God, he was gorgeous.

No good ever came out of ideas formulated while drunk.

So romantic. So beautiful.

Plus... I'd never seen the inside of a twelve-million-dollar penthouse.

Then again... I'd spent the last two years doing everything I should do. And where had that gotten me?

Right here. It'd gotten me right damn here — hungover and unemployed, sitting in this crappy apartment. Maybe it was time I did the things I shouldn't be doing for a change. I picked up my phone and let my finger hover over the "Call Back" button for a while.

No one would ever know. It could be fun — getting all dressed up and playing the part of a rich Upper West Sider while satisfying my curiosity about the man. What harm was there?

None that I could think of. Still, you know what they say about curiosity...

I pressed "Call Back."

"Hi. This is Charlotte Darling calling to confirm an appointment with Reed Eastwood..." 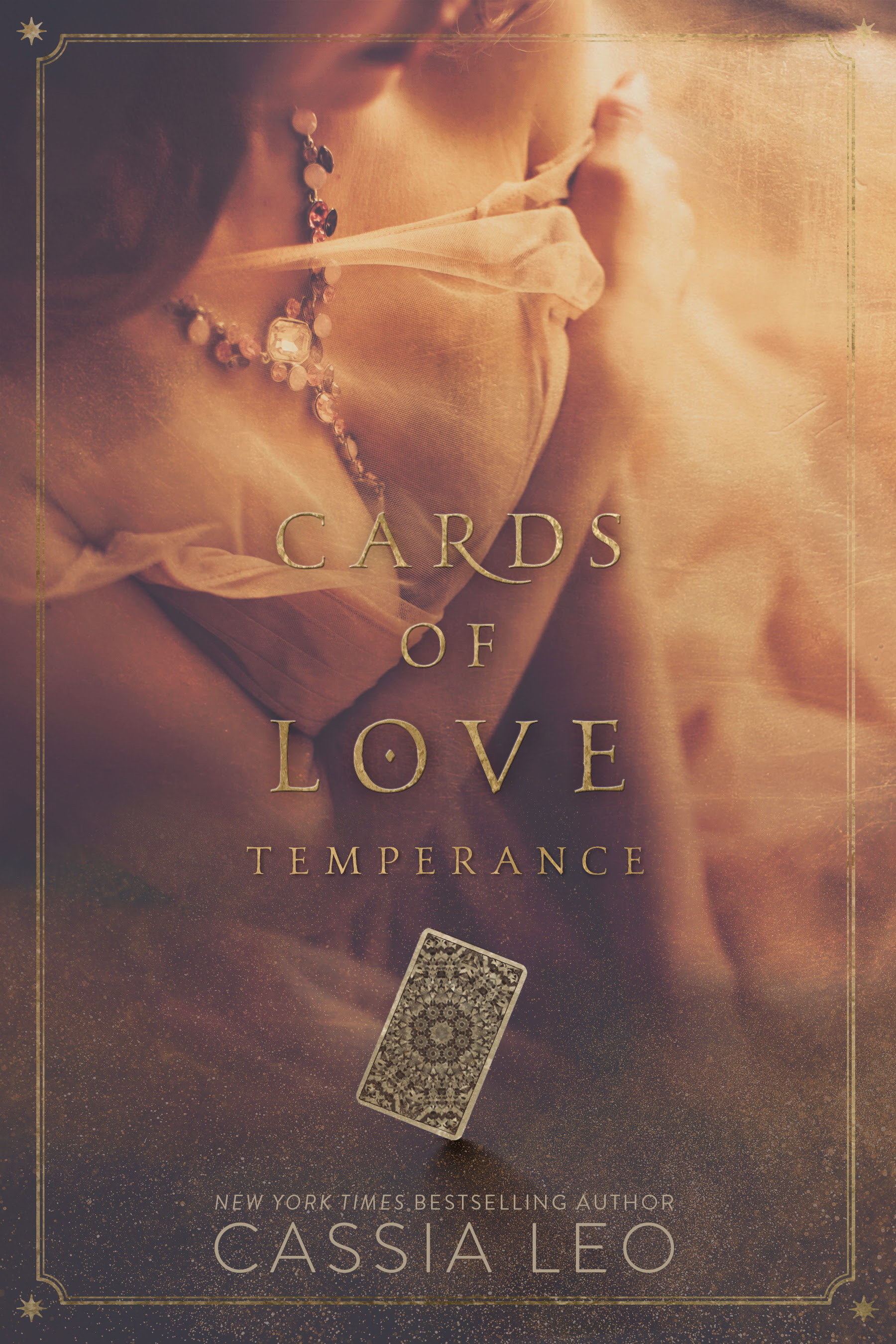 Leah has been counseling high-profile addicts for almost a decade, so she's accustomed to the need for discretion. But her latest client, who goes by the name Mr. C, demands total anonymity. She's never seen his face, but his deep, rich voice occupies her naughtiest dreams and fantasies.

Mr. C's sex addiction is threatening to take over his life. The only thing keeping it from consuming him is his twice-weekly one-hour video chat session with Dr. Grayson. Though his webcam is pointed at a nondescript area of his study, her webcam is always pointed at those succulent lips and her long, lithe legs, which he can't stop fantasizing about. He must have her.

Will Leah and Mr. C submit to their forbidden passion? Or will they practice temperance when a dinner party they both attend presents them with the ultimate temptation? 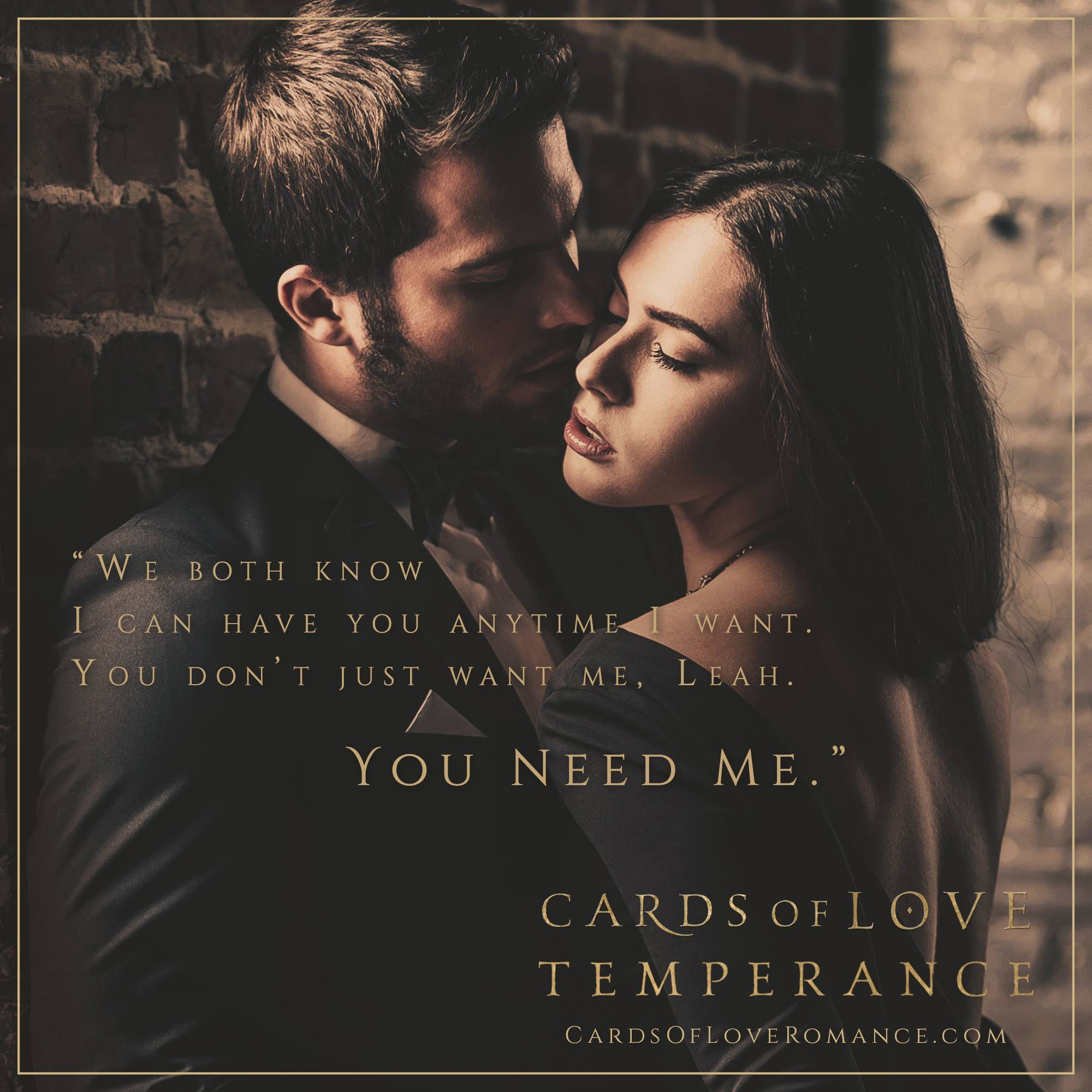 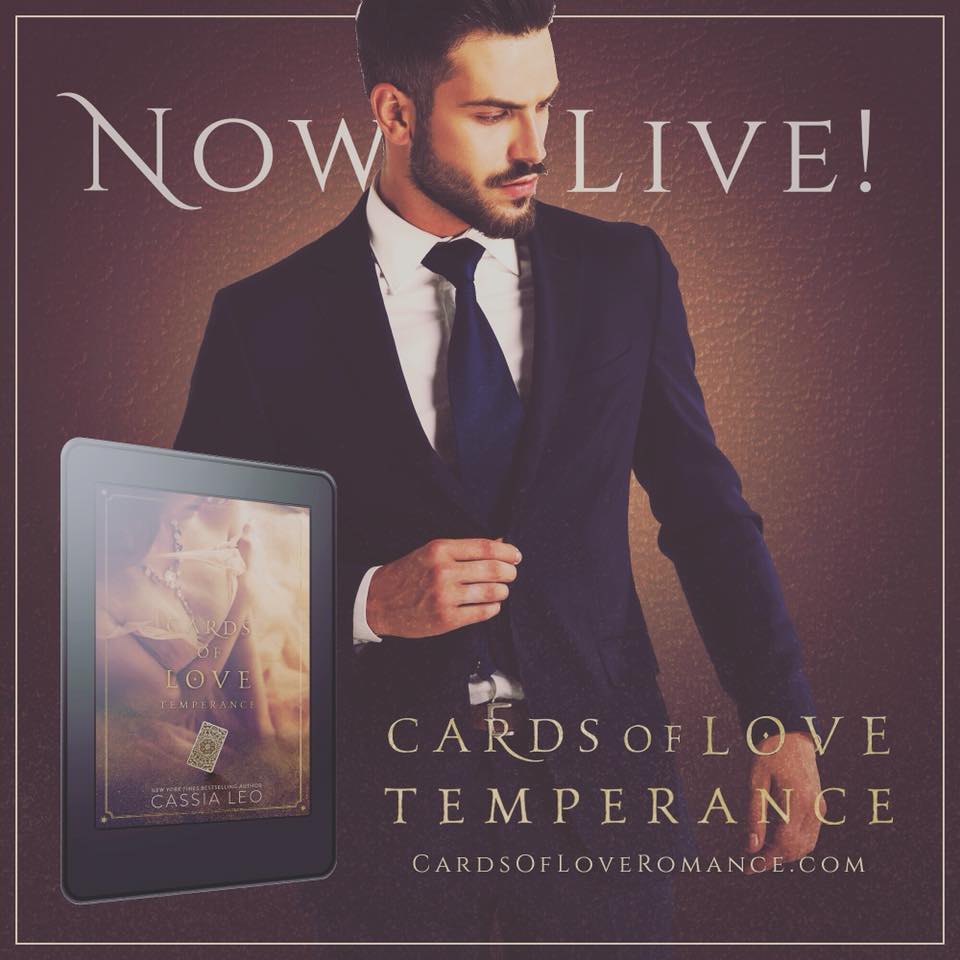 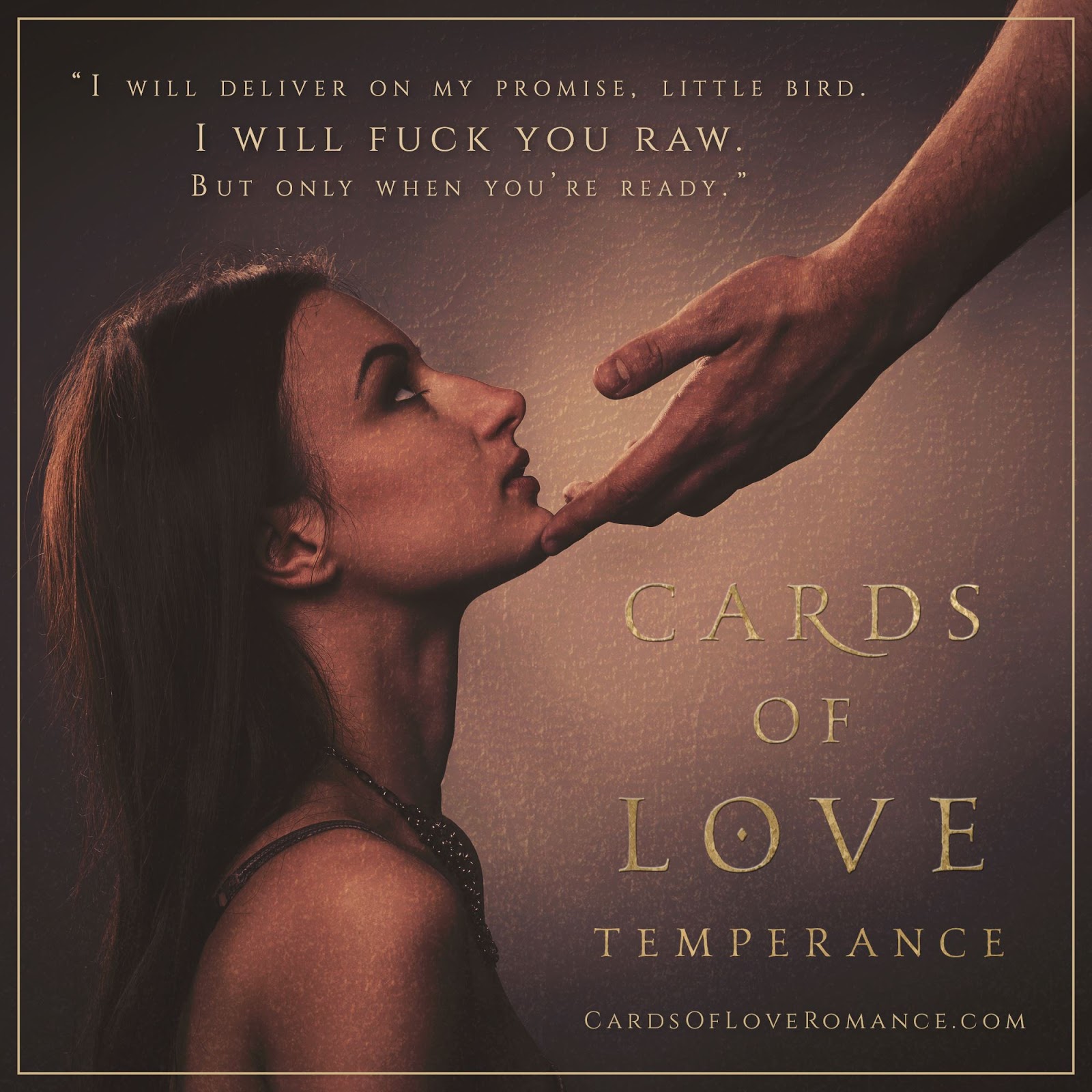 ♡ Hottie of The Day ♡ Josh Dane 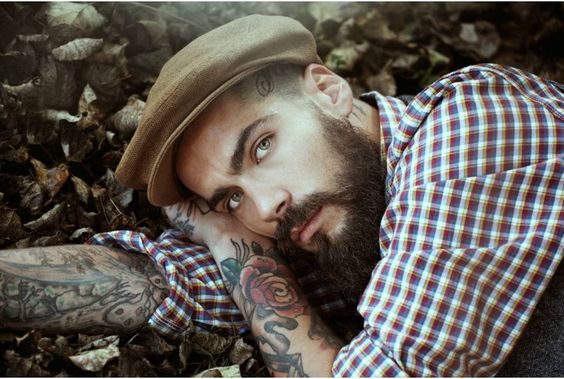