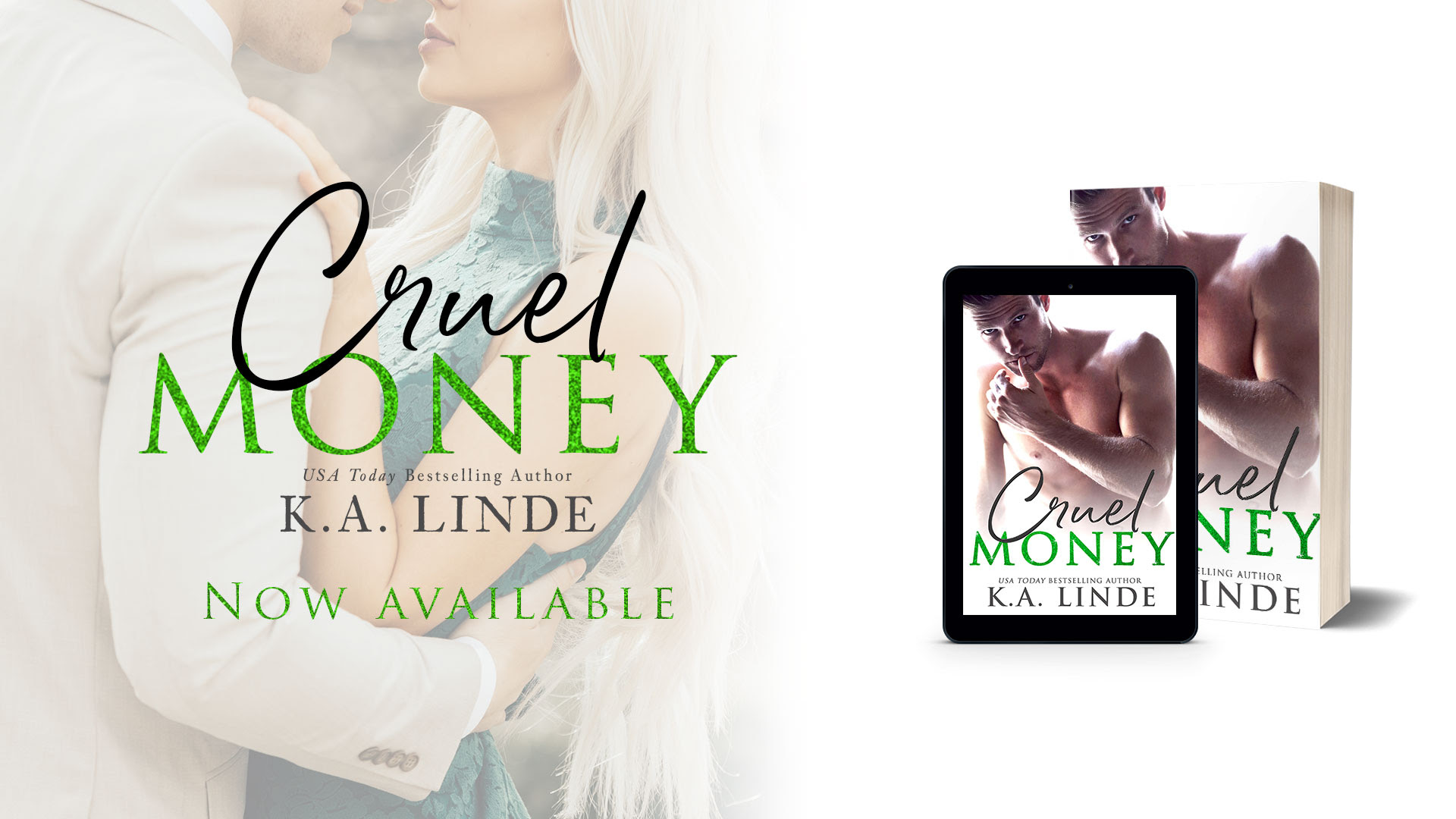 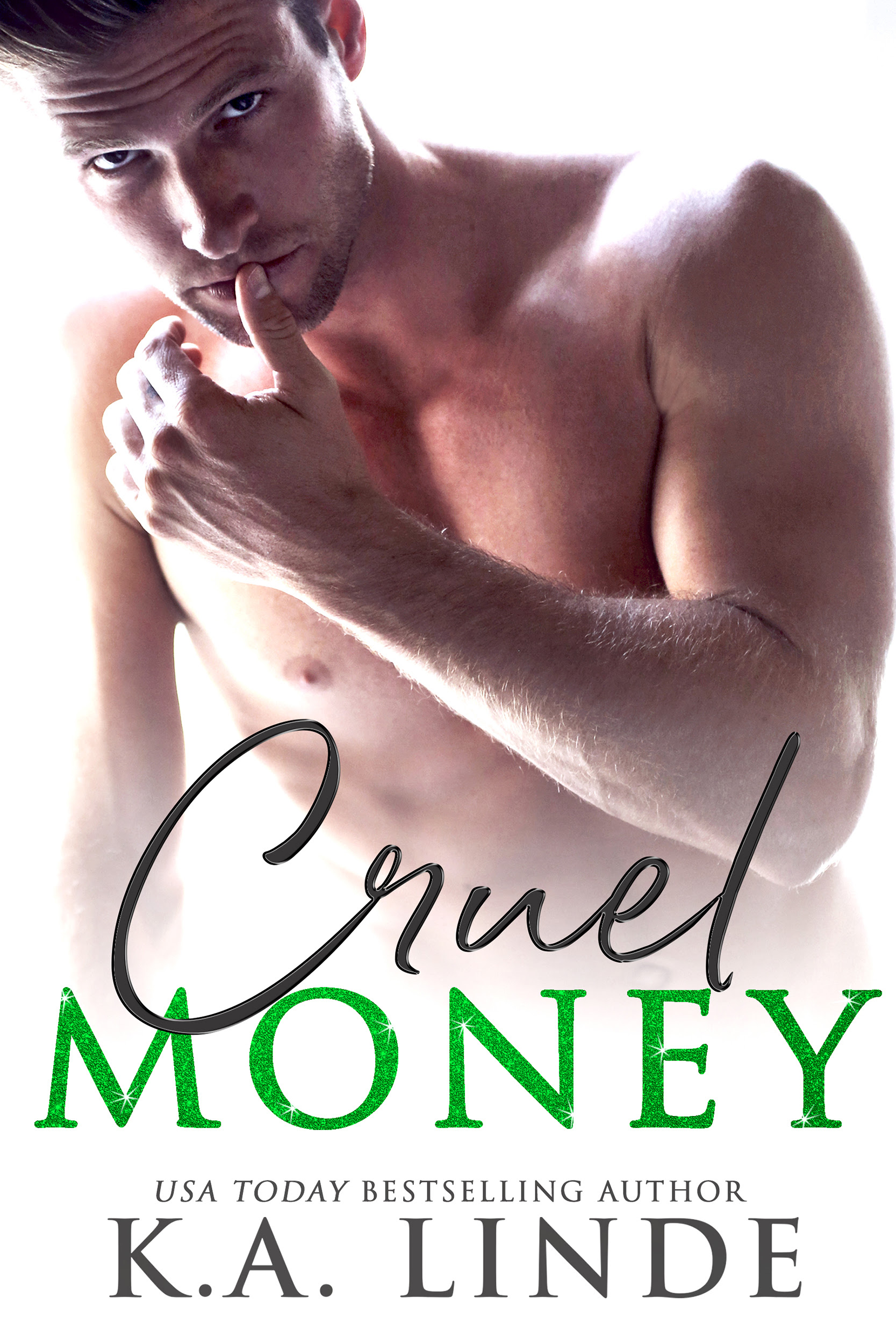 Lose yourself to the dark and glamorous underbelly of the Upper East Side in USA Today bestselling author K.A. Linde's new billionaire romance Cruel Trilogy.

She was supposed to be a one night stand.

A way to sate my sexual appetite.

I let her glimpse the man I am. The face that I hide behind my carefully cultivated life.

But she ripped open that divide - and there's no going back.

I don't care that I'm Manhattan royalty and she's the help.

Only that she's living in my summer home. With me.

And I want more. 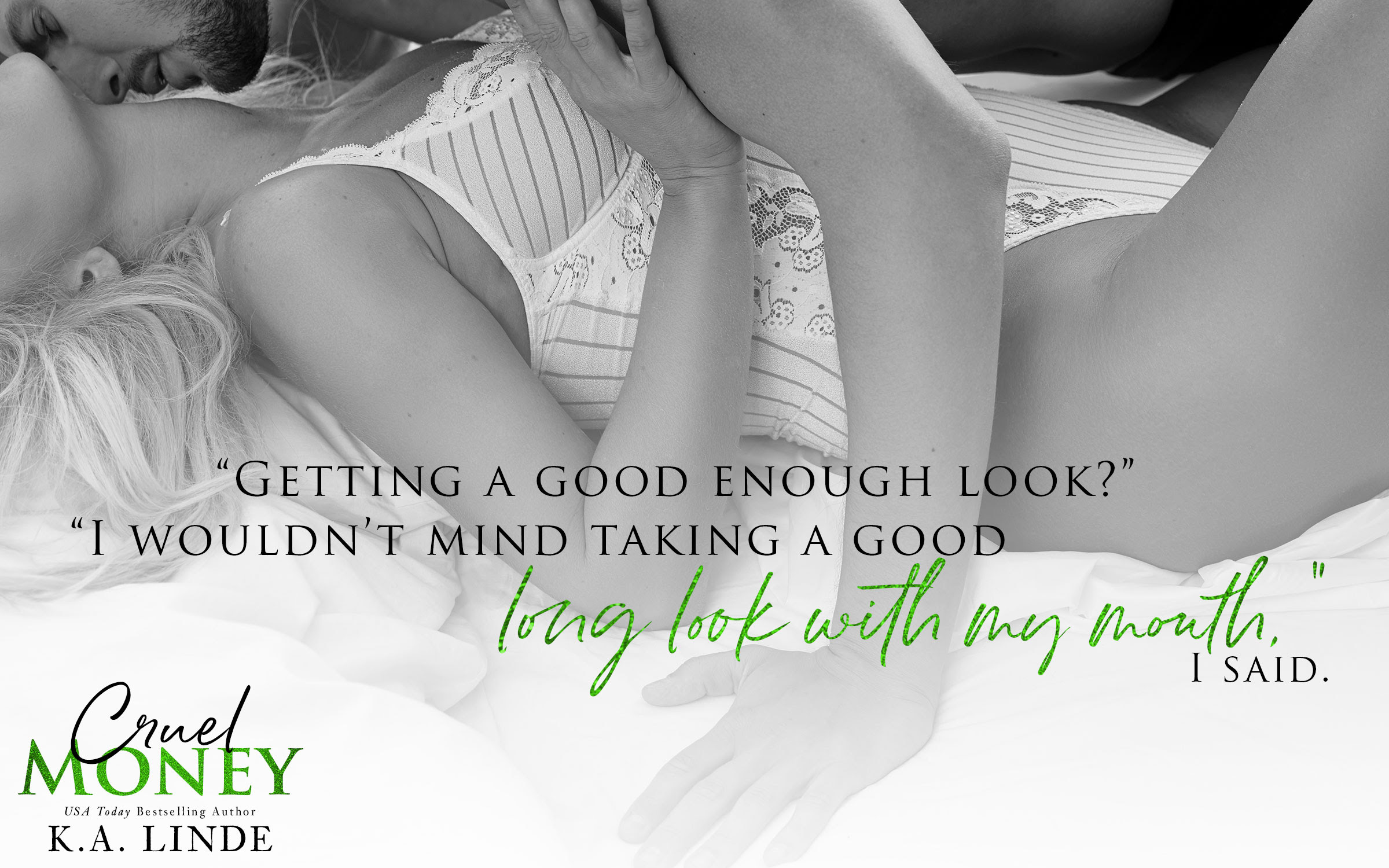 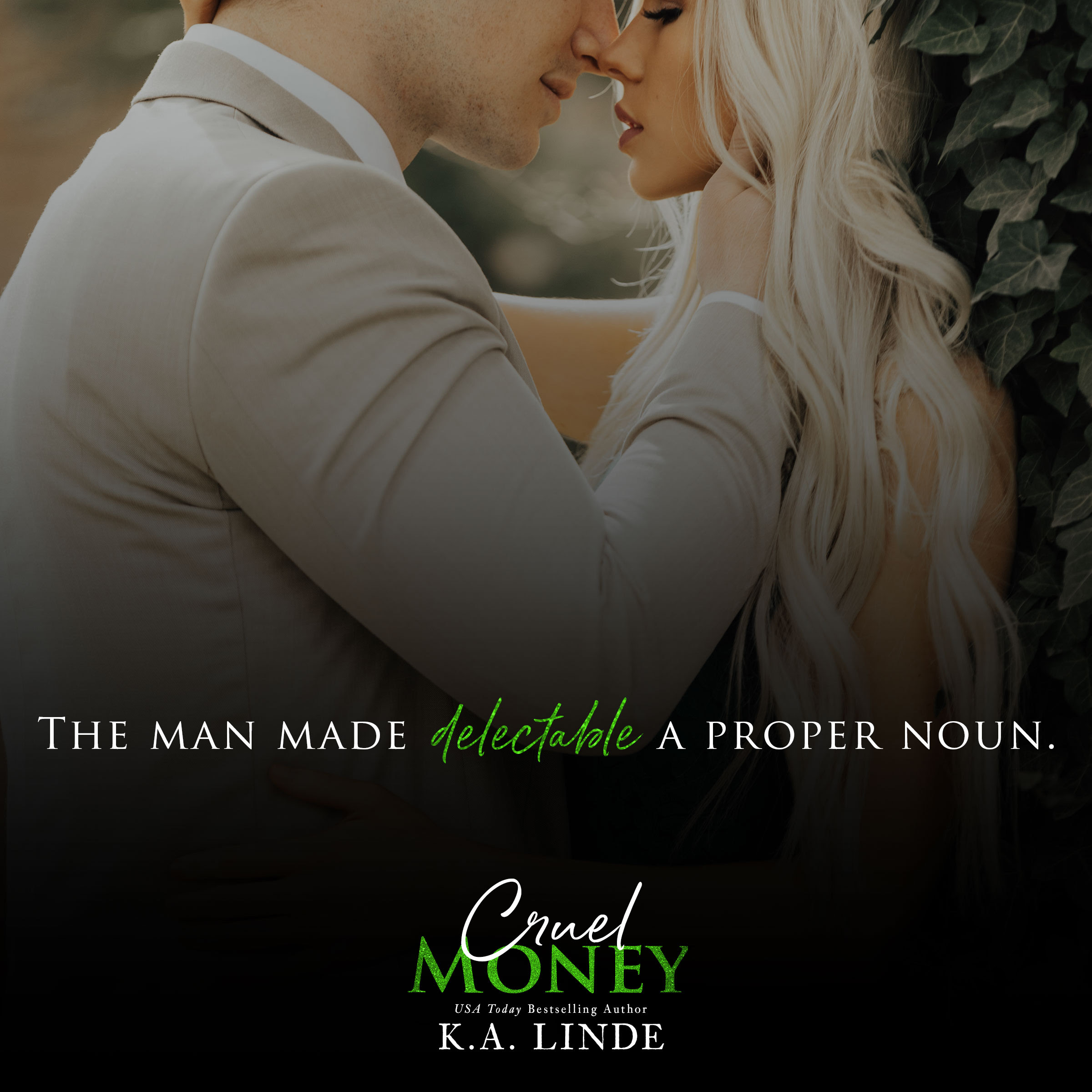 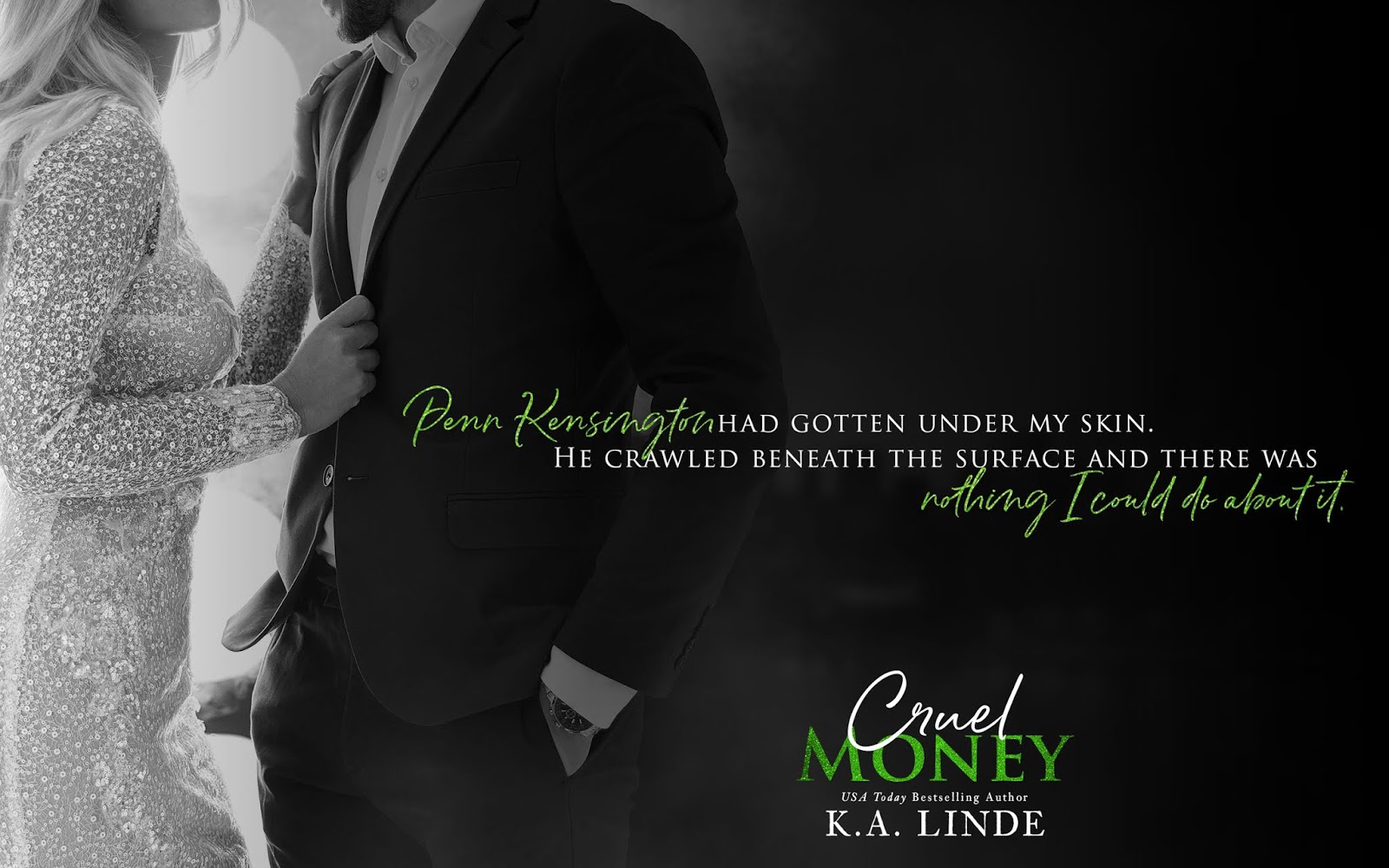 Natalie and Penn had an incredible night together in Paris but the next morning Natalie woke up alone and heartbroken. Six years later, they unexpectedly meet again. The attraction is still there. Can Natalie forget the past? Can their different worlds keep them apart? Or is Penn just playing a game with Natalie?

K.A. Linde delivers another intense, emotional and angsty love story. Cruel Money took me in a rollercoaster ride of emotions and I loved every single page of Penn and Natalie's story. I loved the chemistry between these amazing characters and the different POVs.

Natalie is a sweet but strong young woman. She loves writing and she's focusing to become a writer. She's a free spirited woman, very bohemian. I loved her backbone and that she was not ashamed of her roots and who she was.
Penn is the opposite of Natalie. He comes from money, he's high society, but he's also fighting his roots. He wants his freedom and he wants to do what he loves.

K.A. did a phenomenal job with Cruel Money! She created beautiful broken and relatable characters and a captivating story that will hook you from the first page. I can't wait to read the next book! 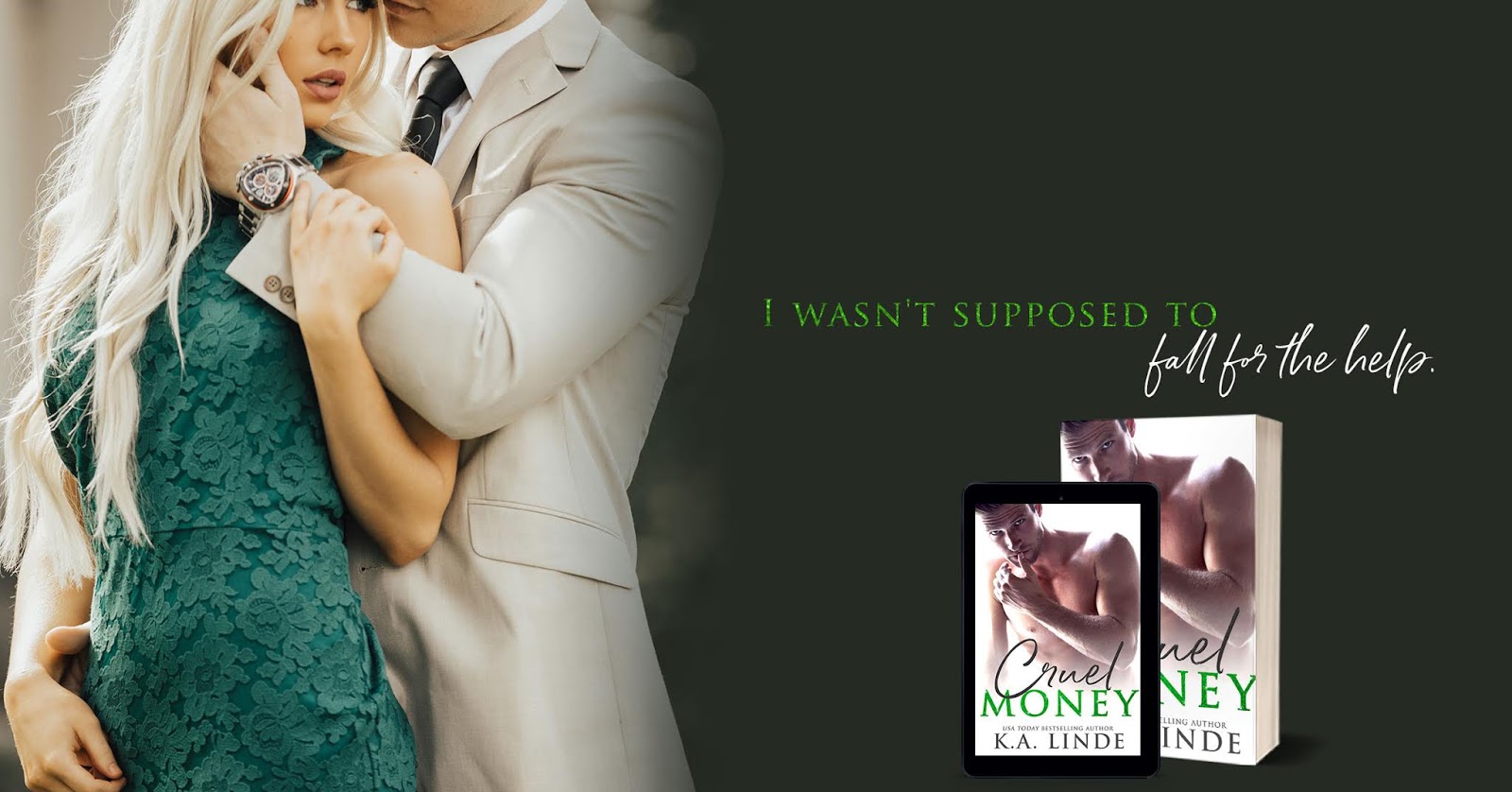 K.A. Linde is the USA Today bestselling author of more than fifteen novels including the Avoiding series and the Record series. She has a Masters degree in political science from the University of Georgia, was the head campaign worker for the 2012 presidential campaign at the University of North Carolina at Chapel Hill, and served as the head coach of the Duke University dance team. She loves reading fantasy novels, geeking out over Star Wars, binge-watching Supernatural, and dancing in her spare time.

She currently lives in Lubbock, Texas, with her husband and two super adorable puppies.

Across the Stars
Cyborg Genesis #1
by
Lauren Smith & Noah Chinn

She's one of the last free humans. On the run... And running out of time.

Laina Roberts has been on the run for ten years, a freeborn human hiding from the cyborgs of the Silver Legion who now controls what's left of humanity. Moving secretly from planet to planet and space station to space station makes for a damn lonely life — and don't even get her started on how long it's been since she last had sex. Sometimes she thinks it might be worth turning herself in to the cyborgs just to end the loneliness. That is, until she's caught!

Captured by a hot-as-hell Legion officer, the cyborg Ronan makes her think being probed by him might not be so bad. But becoming a cyborg's slave — sex or otherwise — isn't high on her to-do list. She doesn't trust him and doesn't understand his constant questions about Earth — especially those about her long-dead relatives. Ronan can just kiss her ass — oh yes, please — because she is not going to let her desires or his incredibly perfect body weaken her resolve. She now has a new mission, to convince the cyborgs and the rest of the galaxy that all Terrans, humans and synthetic humans like cyborgs, have the right to be free.

If only he didn't make her feel like melting into his arms and never leaving. Being captured by a cyborg might not be so bad after all... 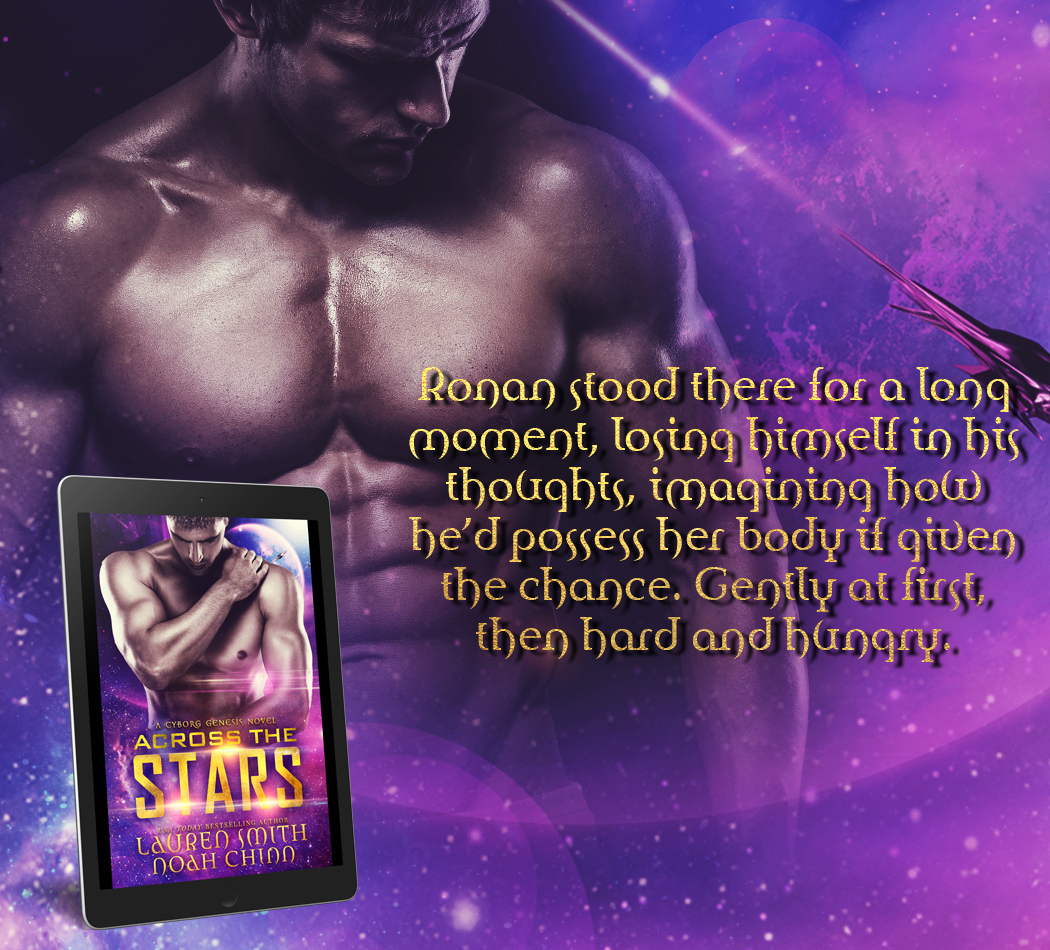 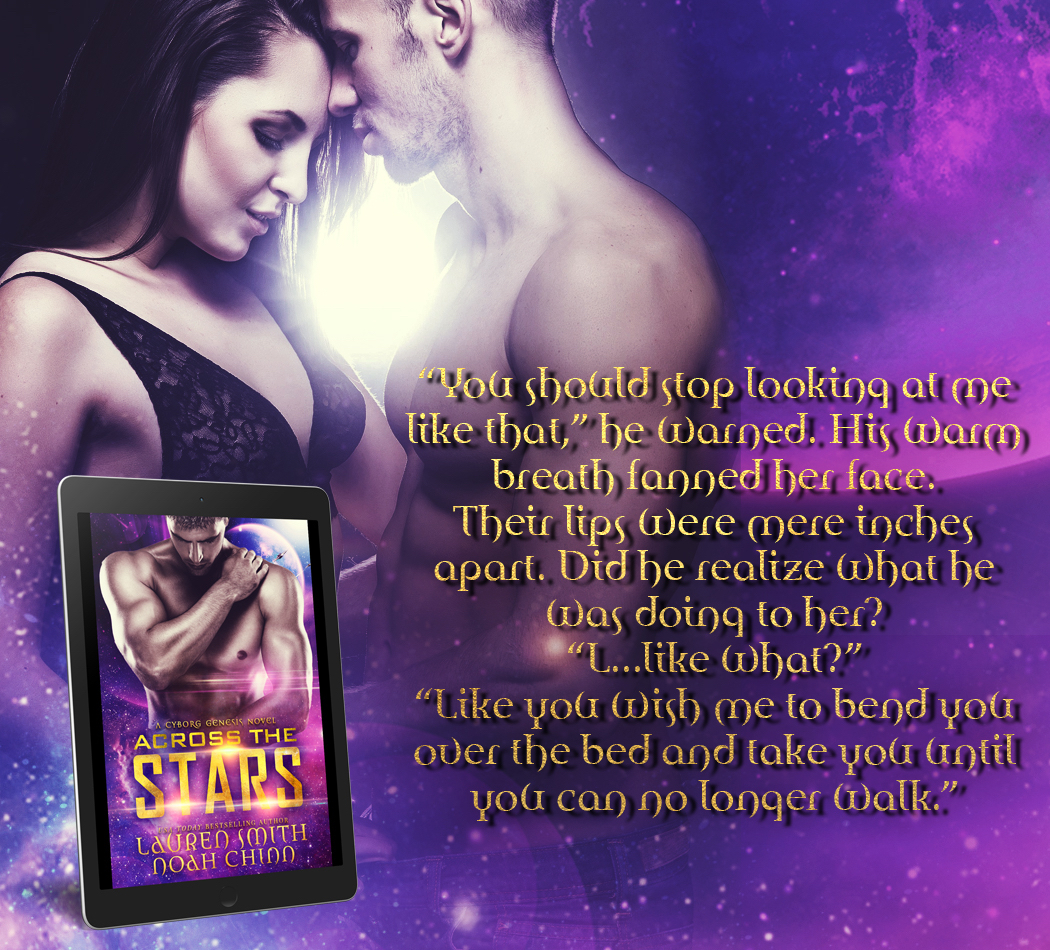 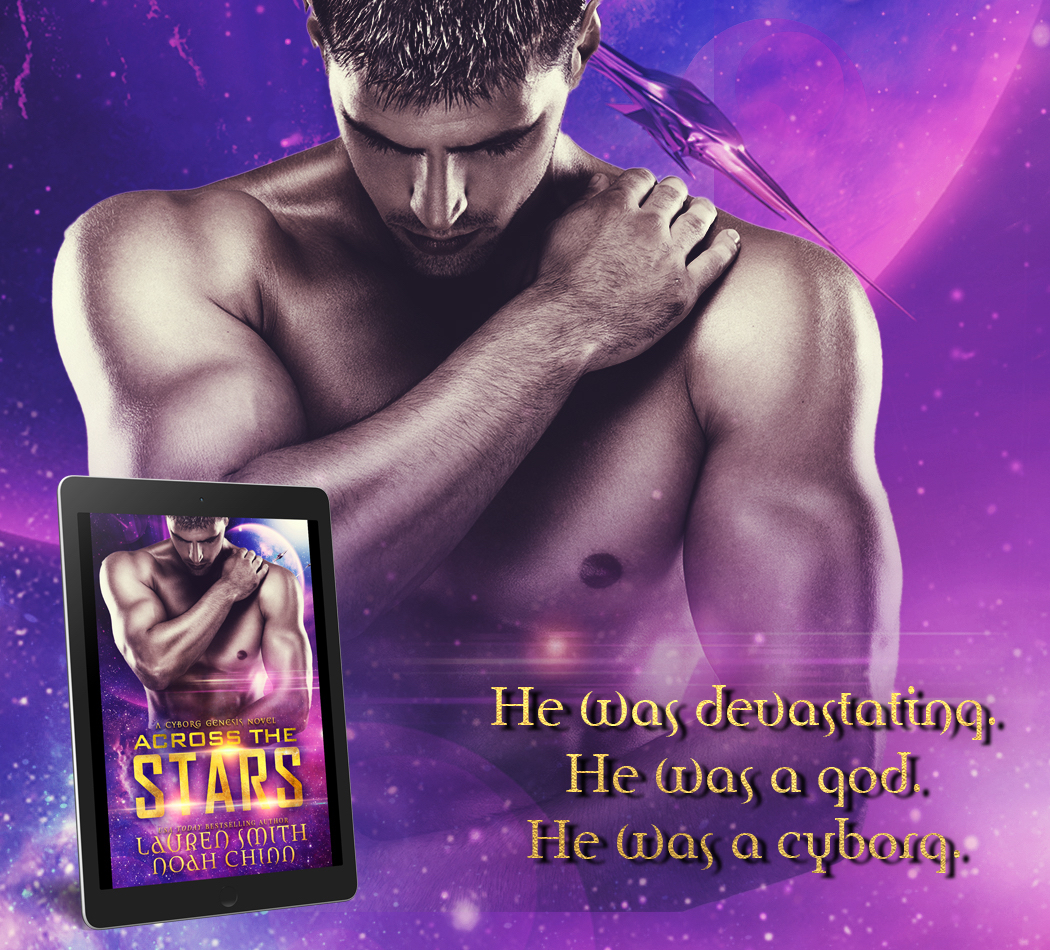 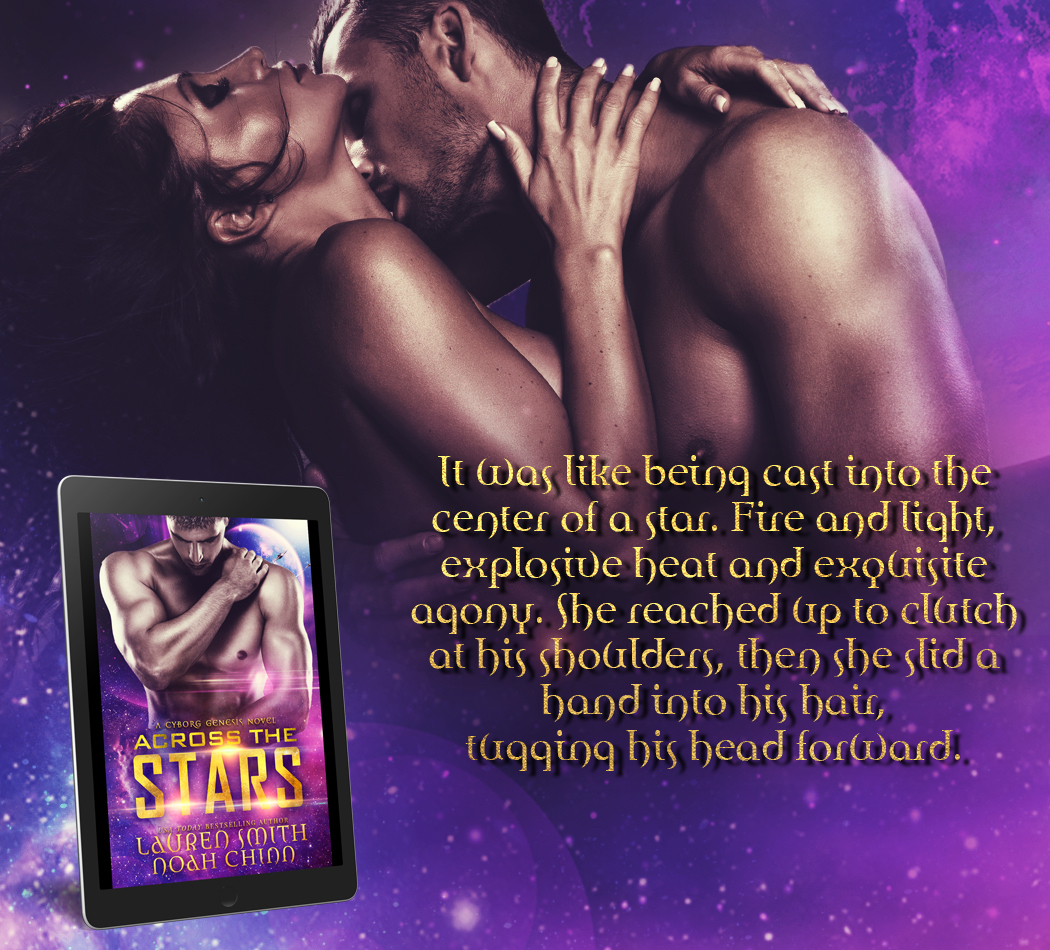 USA TODAY Bestselling author LAUREN SMITH is an Oklahoma attorney by day, who pens adventurous and edgy romance stories by the light of her smart phone flashlight app. She knew she was destined to be a romance writer when she attempted to re-write the entire Titanic movie just to save Jack from drowning. Connecting with readers by writing emotionally moving, realistic and sexy romances no matter what time period is her passion. She's won multiple awards in several romance subgenres including: New England Reader's Choice Awards, Greater Detroit BookSeller's Best Awards, Amazon.com Breakthrough Novel Award Quarter-Finalist and a Semi-Finalist for the Mary Wollstonecraft Shelley Award.

Noah Chinn was born in Oshawa, Ontario, and has never really forgiven it for that. After high school he fled his hometown in favour of the freezing winters of Ottawa. Three years later it dawned on him that higher education and frostbite did not have to go hand in hand, and finished his degree in Toronto.

Shortly after university he moved to Vancouver, where he met his future wife, Gillian. He then spent the summer bicycling across Canada, which she thankfully didn't misinterpret as him trying to get as far away from her as possible. They moved to Japan for three years, where he taught English yet managed not to learn a word of Japanese.

It was during this time that he had a successful cartoon series called Fuzzy Knights, which centered on the exploits of toy animals playing Dungeons and Dragons, and an evil hamster trying to destroy them. Some have called this a cry for help.

He later moved to England with dreams of making it big as a writer - because with a BA in English Lit it was either that or serving fries at a burger shack. Noah's first serious attempt at a novel, The Professional Tourist, was set in a Tokyo language school. Unstable students (and teachers), biker gangs, and the homeless underworld of the Blue Village all featured in this slightly askew romantic comedy.

The book landed him an agent, but not a publisher. Unfortunately, in the way aspiring actors move to Hollywood and end up as busboys, the closest he came to literary success in England was working at several bookstores - each of which mysteriously closed down after his stay.

After writing several more manuscripts and moving back to Canada, he found more success in the North American market. He and his wife now live in Vancouver.

He now wears a hat.

💓 Hottie of The Day 💓 Andrew England 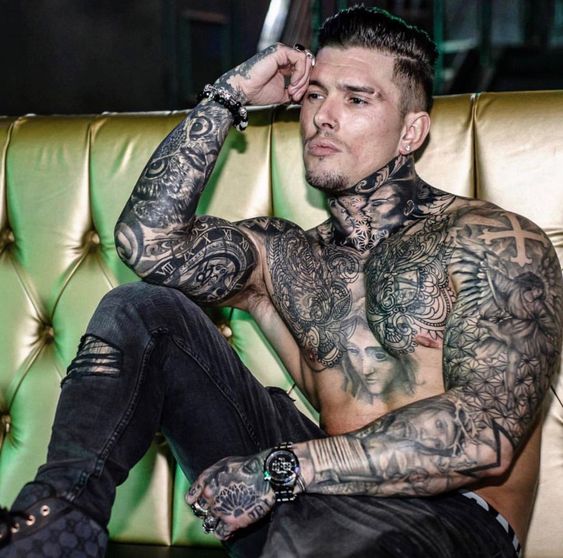