Katerina Baker is a lucky gal who still attempts to have it all: full-time project management job that she enjoys, crazy family of four (with the ongoing threats of getting a pet to upset the family equilibrium) and writing.

Although on some days she is much more successful at managing her life than on the others, she still claims that she doesn't want it any other way.

Katerina's latest novel Under the Scrubs will be published in the spring of 2019 by Limitless Publishing. Her YA novel Blue is represented by Sharon Belcastro from Belcastro Agency. 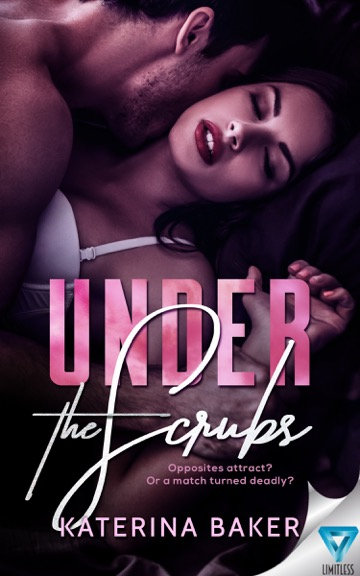 My life is ordinary, steady, predictable. And I'm okay with that. Working long shifts at the hospital is all the excitement I need.

But when a simple rescue-attempt goes wrong, I find myself in the arms of an arrogant, yet sexy FBI agent.

Kai Evans is what I«d call way out of my league. Yet, we end up dating. Sort of. That's if you count fast-bike escapes and kissing while bullets fly around us as a date.

While Kai tries to keep me safe and alive, Tyler Moore - an ex FBI agent with a smart mouth - slithers into my life. Turns out, Kai and Taylor have a history. The kind that can't be erased with a simple handshake.

Now it's all about settling the score between them, and Taylor has the perfect weapon to use against Kai... 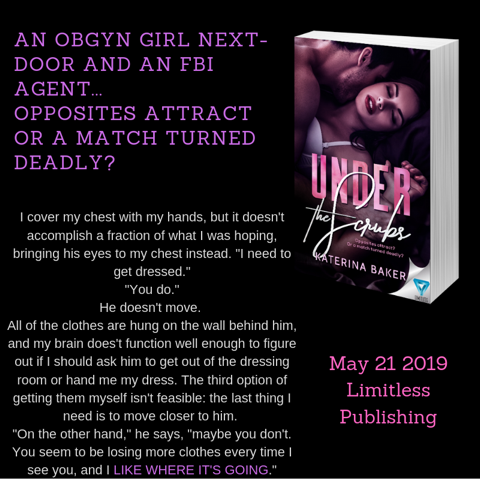 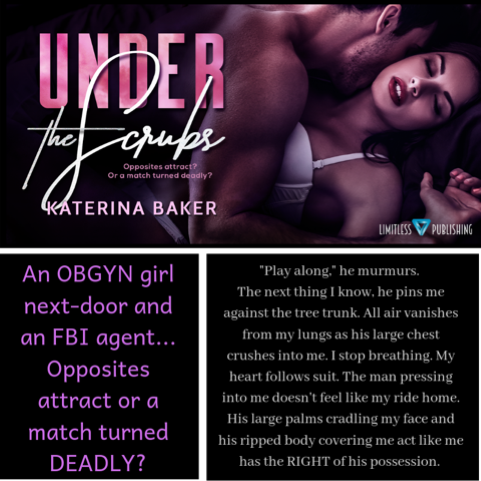 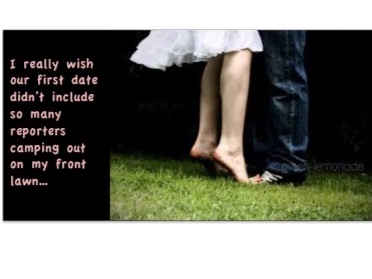 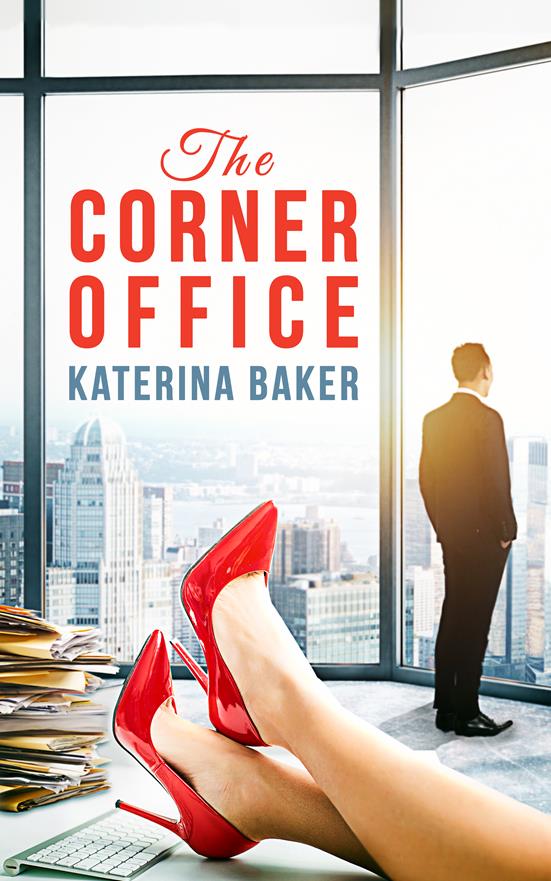 Tara Johnson's sacrifices are about to pay off: a senior executive at thirty-five at a Fortune 500 company, she's one of the two finalists in line for a Managing Director position. Unfortunately, her rival of fifteen years, the charming, infuriating Richard Boyd, is just as qualified, and unlike her, he's willing to cross pretty much every line to get what he wants.

Of all the things Tara stored in the attic to make it to the top, it's her personal life she misses the most. That is, until she starts a steamy affair with sex god Aidan, her direct report. Interoffice relationships with a subordinate can mean the end of a career, and when Richard finds out, it's the perfect opportunity to take his high-heeled nemesis out, especially since he's still nursing a grudge against Tara for rejecting him years ago.

But Tara's increasingly domineering lover has his own dark secrets, endangering more than just her career. As her liaison spirals out of control, salvation will come from the man she always thought she hated, and perhaps the only one to truly understand her.

You're bad-ass, Emilia. Keep cool, I chant silently. So what that he's twice my size.

Yes, barging in when I'd seen a man picking a fight with a woman in the middle of a dark, empty street wasn't my smartest move. She had a baby in the stroller, and I figured if he wanted somebody's wallet, I could just give him mine.

The woman quickly left, and I'm now facing him alone. We're a block away from the YMCA where I teach evening childbirth classes, an area that's best avoided during the daylight, much less an hour before midnight.

He advances toward me with the crazy gleam on his face. A dim shine from the broken street light briefly illuminates an object in his hand. A knife. "Bad-ass, huh?"

Crap. Crap. Crap. My stupid habit of thinking out loud. I back away until I hit the wall of a crumbling building behind me.

"I'm sorry!" I shrink back as far away from the knife as possible. "I promise to never interfere with your business again! If you want, I can deliver your future babies, at no extra charge! Well, not yours, of course. Your wife's."

Shut up. Shut up, what are you saying?

He stares at me like I've just offered to pull a baby out of his behind, and I clarify quickly, "Yours and your wife's. I'm an OB/GYN. I've just finished my residency, and I'm fully qualified."

No effect on his you're-a-crazy-lady look. I'm dead, all because of my big mouth.

"Listen to me! It was just a mistake, okay? I'll never pretend to be bad-ass again, since it bothers you so much!"

He roars in laughter. And it's not a haha-you're-silly-but-cute kind, but the cackling of a man who has just stopped considering me as his one-minute of entertainment and began getting seriously annoyed. "You're nuts," he concludes.

No passing cars. The blinds on the building across the street are drawn. The chances of me making it across the street to the subway station before he smashes my head against the asphalt are slim to none. No escape. This is how many of those accidents shown on New York One Hot Minute happen: a nutty burglar and an even nuttier victim, although cuckoo in a different way, of course. What a terrible time to die. I was just starting to do my own deliveries, and now I'm not going to reap the rewards of the years of studying. I won't be able to see mothers' faces when they hold their babies for the very first time. I'll just bleed to death and never—

The knife drops, sliding down my breast area and falling to the ground with a loud clank. A leathered-glove fist clasps around the man's hand. My attacker's body thumps against the asphalt, sent flying by the man in all black who throws a targeted blow at his opponent. The dark-clothed man is smaller in size, but he's not wasting a single body movement. Every punch seems orchestrated, purposeful. His shoulder blades flex underneath his leather jacket. In a matter of seconds, the man on the ground stops fighting back and tries to cover his face. The man in black settles on top of the other man, squeezing his neck with his elbow.

Why am I sitting like a duck instead of helping my savior? The knife is lying on the ground next to me, and I should try to pass it to the good man, at the very least. He seems to know what he's doing, with those precise punches... but what if this battle takes a wrong turn and someone gets seriously hurt, all because of me? They're no longer wrestling, but the weapon might help the man keep the bad guy at bay until police arrives, right?

I pat him on his shoulder and offer him the knife.

He turns, and I meet the most striking blue eyes and the semi-moon of his curved lips. Dark scruff accentuates his powerful lower jaw with a tiny crater in the middle. And, holy crap, you know those cop shows where the heroes engage in fistfights and come out looking all put-together and tough, all without as much as breaking a sweat? Well, this man is panting a little, but apart from that and a little bit of sweat gathered on his forehead, I can't tell he's not on the set of that cable TV production with a few makeup artists who have just finished turning him into a swoon-worthy prime-time celebrity.

"You sure?" he whispers in a deep timbre that seems to shake some nerve endings in my body. Even his voice is out of this world, with a little bit of Clark Gable going on for him.

I drop the knife... away from both of them. "Please, let police deal with him."

"I'll never touch her again. She's too bad-ass for me!" the thug interjects quickly.

"Bad-ass?" My white knight's lips spread in a wider grin. A light twinkle plays in his eyes—a trace of humor on an otherwise rough canvas with a scar that runs down his left cheek all the way to his neck.

The screeching of police sirens sounds, and soon cops run toward us, their guns drawn.

Some of them carry serious weapons, revolvers or whatever those long firearms are. Oh God. What if they make a mistake? I dash between the officers and the men on the ground. "Wait! Don't shoot!"

They hustle me out of the way as one of them pats my arm and informs me something about police never shooting those who aren't fighting back. He may have said more, but at this moment the man in black gives me a small nod, and I stop paying full attention to the cops. My rescuer gets up and passes the bad man to the cops, all the while glancing at me sideways. He shows the cops his ID, and they exchange brief muted conversation, during which I'm able to gather that the woman with the baby called the cops and she will press charges. I reach into my purse to find my own identification just as I hear the officers say they won't need my testimony.

In under a minute, the bad man is cuffed and hauled into the police car. Another hushed whisper between my protector and the cops, and they give me a friendly wave and walk away. "Have a good evening, ma’am. We trust you'll get home safe."

As soon as we're alone, the man strolls toward me. It's not a walk, mind you. It's a swagger that's only possible after you've just overpowered a huge bully without breaking a sweat. "I can't believe you actually stepped in between me and their guns," he says.

"They could've shot accidentally, and after you so bravely came to my rescue, that's the least I could do. I mean, I didn't think they would shoot a woman, so I'm not a hero by any means... not like you."

"It was an extremely reckless move. Do you always jump head first into danger?"

"Oh, no." Well, okay. I've just tried to meddle with a street thug's business, and I'd do it again in a heartbeat if that meant protecting a mother and her baby. But I don't do this sort of thing every day. Or ever. I'm just a doctor. I read books. Watch classic movies. I was thinking about picking up crochet, but I've been working late hours and could never make it to the weekly Embroidery Club. "You could say that was an idiosyncratic occurrence. I prefer to stay away from weapons of all sorts."

"Good." He smiles at me. "I'm Kai. Are you okay? You have a little bit of blood on your chin." He leans down and examines a tiny scratch on my face. He smells like an expensive aftershave, much better than should be allowed after you’ve wrestled on the sidewalk. "My car is just around the corner. Let me drive you home. You shouldn't be here alone this late at night."

"Oh, you don't want to drive me home. I live really far out in Jersey. I was about to take the subway to the bus station."

"I've done this forever. It lets me catch up on my reading."

"Not tonight. Come. I really don't mind." He offers me his hand.

Can I get into the car with a total stranger? What about the rules, the universal Do Not Do list your mom has taught you when you were little? But tonight he's my hero, so if you think about it — what the heck. I deserve this one leniency.

I place my palm into his. Our skin touches. You know that tingly feeling when you brush against a man, and it's all quiver and butterflies? I've never felt this before. Until now.

He places his other hand on the small of my back, directing me toward his car, and I follow. What’s more? I've already made up my mind. If he asks for my phone number, I'm going to give it to him.

💓 Hottie of The Day 💓 Josh Kloss 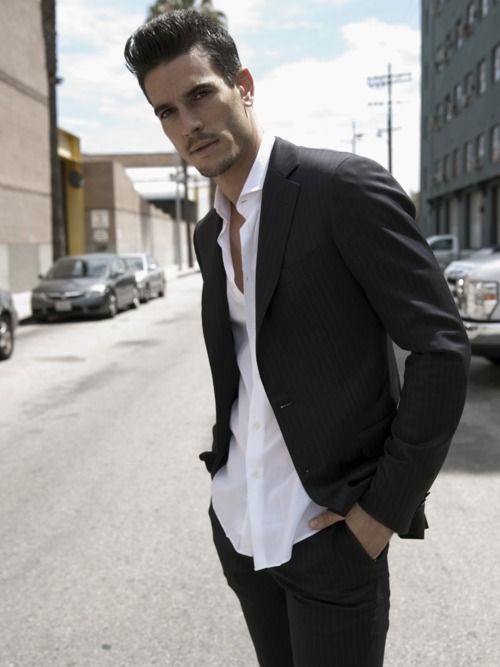